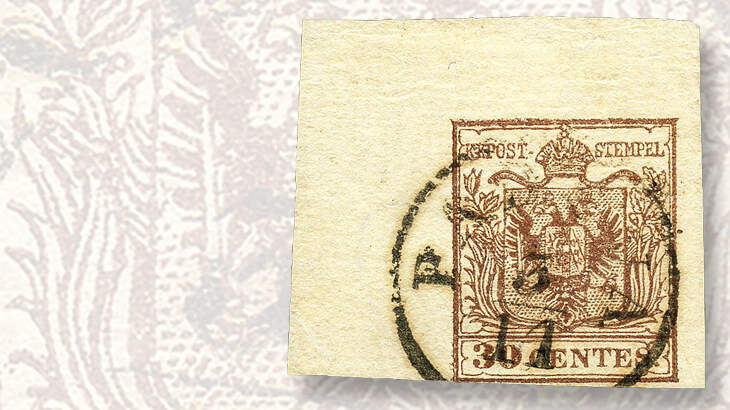 Large-margined stamps such as this 30-centesimo stamp command a premium. This stamp is from a sheet corner with 12 millimeters to 13mm to the left and 8mm at top. 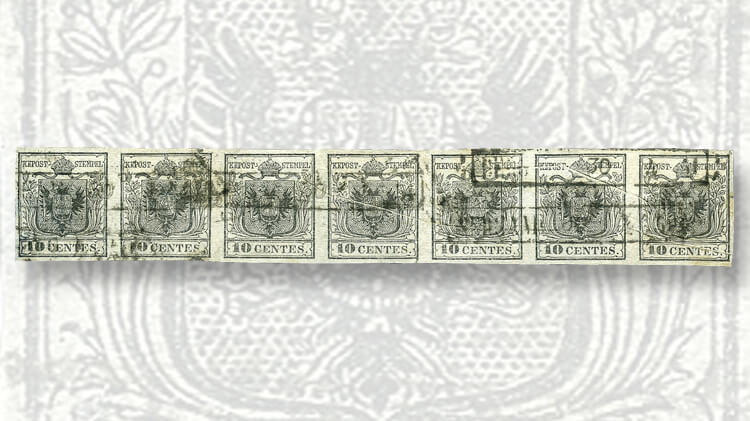 This strip of seven 10-centesimo stamps is the largest used multiple of Lombardy-Venetia’s first issue seen by the author. Used blocks and used strips are particularly sought by specialists. 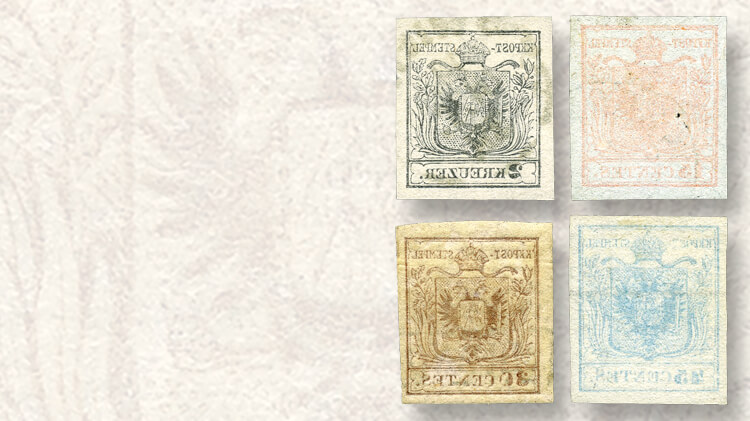 Offsets are images that appear on the reverse side of a stamp, most often being a mirror image of the same stamp seen on the front. Stamps with offsets command a premium that can be significant.
Previous
Next

Part 1 of this article on the first stamps of Austria and Lombardy-Venetia stamps was published on Linns.com on Sep. 28. Part 2 covers other interesting aspects of the first issues.

The paper of the 1850-58 stamps is uniformly white. Any yellowing indicates unfavorable storage conditions. At first, in 1850, the paper was handmade. After 1854, it changed to machine-made paper.

The difference between the two papers may be easily determined by examination of the surface, front and back, with an 8X or 10X magnifying glass. In the handmade paper, the surface is uneven, with channels and ridges where individual fibers sit. Occasionally one or more fibers jut. The 5-centesimo stamp does not exist on machine-made paper. That fact may help define the characteristics of handmade paper.

In machine-made paper, the main feature is the flatness of the surface. If the paper gives the appearance of being surfaced, like in chalky paper, it is certainly machine-made.

From February 1851, sheets already printed were subjected to pressure, probably by rollers, which imprinted on the paper a pattern of narrow parallel lines, the result being what we now know as ribbed paper. The ribbing is always vertical. There are thirty vertical “ribs” in 2 centimeters, which is about the width of a fine stamp with good margins. Ribbings differently spaced or with different geometries are forged. Ribbed paper varieties exist on the following six denominations:

The practice of ribbing the paper ended in 1852.

The fourth type of paper used for the 1850 issues is vertically laid. The laid lines are fairly thick, and there are 15 in a width of 2 centimeters. They are all very rare, and forgeries abound. Laid paper stamps are thought to have been experimental. They are known in the following three denominations:

Italian dealers also recognize another category, which already 100 years ago was described by experts as “slightly laid paper.” In these stamps, which exist also among the Austrian stamps with kreuzer denominations, the laid lines are weaker but are otherwise essentially the same as lines on the very rare stamps described above. The difference is that, in used condition, they are not so rare and pricey. None of them are known in unused condition:

I am not sure these varieties deserve listings in the major catalogs. Be that as it may, they sell for between $300 and $600, depending on the extent of laid lines, margins, and other factors of condition.

The paper exhibited a wide range of thickness, from 0.05 millimeter to 0.16mm — that is, from pelure paper to card stock. And, even more curious is the fact that the same range of thicknesses exists on both handmade and machine-made papers. I have not come across any explanation for this variance, but what I can say for sure is that it is a unique occurrence among European first issues of postage stamps.

Pelure paper stamps have premiums of at least $60. Stamps with 0.06mm and 0.07mm thickness merit premiums of $20 to $55, depending on the denomination.

For handmade paper stamps, a more precise evaluation may be reached by following the table below. Values for machine-paper stamps of various thicknesses are very similar. All values, whether approximate or precise, are intended to apply to very fine stamps, with full margins, without faults, and are supplements expressed in U.S. dollars.

In all values of this first issue, imperfections of the impression may be found. They consist usually of small parts of the design missing. Examples may be: interruption of a frameline; part of a letter or number missing; or deformity of a leaf, the crown, or the background of the shield. The opposite also happens when a small part of the cliche breaks, rises and produces a tiny dash, dot, comma, or hairline, which some authors have named “parasite impressions.”

After much research, about 940 such varieties have been cataloged in the first issues of Austria and Lombardy-Venetia. Classifying and cataloging such varieties is not simple for two reasons: one-time varieties, such as caused by a piece of a foreign object falling on the plate, are not counted as plate varieties; and real plate faults that deform the plate tend to be progressive, worsening with each use of the plate, until noticed and repaired. Thus series of flaws from smaller to larger occur, and they are normally listed as a single fault, with stages of its growth.

Collecting and analyzing typographical faults is an absorbing pastime, and specialized literature to guide the quest exists. Needless to say, flaws command premiums according to their individual scarcity, and more so according to their size and spectacular nature.

According to some philatelic writers, “offset” is the wrong term; accordingly, the correct term is “set-off.” The term offset can easily be confused with offset printing, which is nearly synonymous with lithography. Set-off, instead, has no other meaning in printing. I will use the most often used term in this section.

Offsets, if the word is allowed, are images that appear on the reverse side of a stamp, most often being a mirror image of the same stamp seen on the front. They come about when an inked plate is placed in a printing machine and allowed to run without the insertion of a piece of paper. The plate will then make an impression of a sheet of stamps on whatever material is at the base of the printing surface. Sometimes that is a sheet of metal; other times wood, leather, or a humid-absorbent paper, cloth or other material, intended to cushion and distribute the pressure of the plate on the printing paper and, therefore, to the production of a more even impression through the sheet of stamps.

Such a base is known to printers as a tympan. Often the press is lowered onto the tympan for alignment, calibration, or other reason. When printing is resumed, the back side of the first printed sheet comes into contact with the tympan’s material and obtains a mirror-image of the stamp. In this case the back impression is known as a “machine offset” or “blanket print.”

A second type occurs when a sheet of printed paper is placed on top of a sheet of stamps whose impression has not sufficiently dried. Then, part of the ink of the lower sheet will be transferred to the back of the newly printed sheet, producing a mirror-image, which is in this case known as a “stamp offset.”

European catalogs normally list and value offset impressions on classic stamps. Combining the information given in recent Austrian and Italian catalogs, I derive the following approximate premiums for stamps with machine offset impressions. As you can see in the table, offsets can be quite valuable.

All sheets of stamps printed on handmade paper have a sheet watermark. The plates contained four groups of 60 stamps each, for a total of 240 impressions in each sheet. The groups were separated by gutters. Along the center gutter was a vertical watermark in large italic, heavily decorated letters reading “K K H M” (Empire and Kingdom Ministry of Commerce) reading from bottom to top. The watermark was wider than the gutter, so that parts of the inscriptions appear on individual stamps. Twenty of the 240 stamps of a sheet could show parts of the watermark, but effectively, due to the shape of the letters, only 18 stamps on any one sheet would likely show part of the watermark. That amounts to 7.5 percent of all stamps printed on handmade paper.

The presence of watermarks ended in 1854 with the introduction of unwatermarked machine-made paper. Stamps showing parts of watermarks are sought-after. Very fine stamps command a premium of about 50 percent.

Sheets of paper were generous for the layout of stamps. Margins between stamps average 2.75mm. Sheet margins are either 10mm or 15mm. The 30c stamp shown nearby is from a sheet corner with 12mm to 13mm at left and 8mm at top. Sheet margins and corners command premiums, and an overview of the middle range of what is found, for both handmade paper (HP) and machine-made paper (MP) stamps, is given in the table below. It may be seen from the table that measuring margins of large-margined stamps, like that previously illustrated 30c stamp, can be a fruitful activity. More so is to acquire a group of Austria and Lombardy-Venetia stamps with large margins and attractive cancellations. Watermarks, offsets, large margins, and plate varieties may be lying there, waiting to be discovered.

Paper thickness, typographical flaws, offset prints, watermarks, sheet margins, and sheet corners all pale in comparison to the incredible demand for multiples. Used blocks and used strips are particularly sought by specialists. Perhaps it should be stated at this point that the issues we have been describing in this and the previous article are almost certainly the second-most widely collected classic stamps of the world, following closely on the heels of Great Britain’s unchallenged supremacy in classic philately. That goes a long way to explain the impressive premiums for varieties that are listed here.

For instance, the strip of seven 10c stamps shown in the gallery above has a catalog value of €25,000, about US$ 28,000 at today’s exchange rate. (It is the largest used multiple of Lombardy-Venetia’s first issue we have ever acquired.)