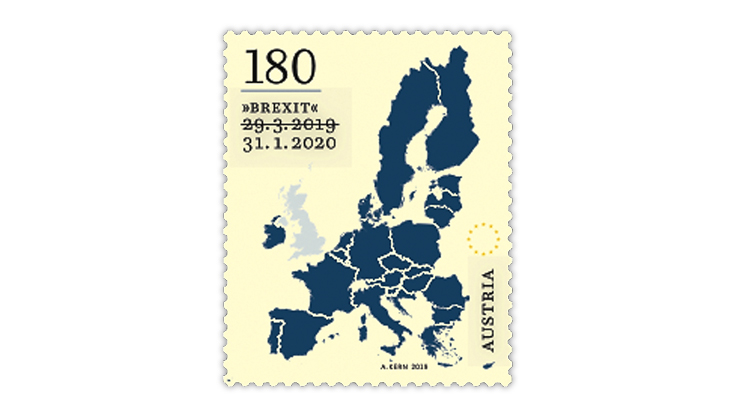 Austria Post issued an overprinted Brexit stamp Jan. 31. The overprint is on a previously unissued stamp created to commemorate the planned, but postponed, Brexit date of March 29, 2019.

Just as Brexit (the British exit from the European Union) was delayed, so was Austria Post’s postage stamp commemorating the event.

Austria Post had printed a stamp with the original Brexit date of March 29, 2019, inscribed as “29.3.219” in the upper left below the €1.80 denomination and the word “Brexit.” But Brexit was postponed, and the stamp was not issued.

However, the stamp wasn’t destroyed. Instead, Austria Post overprinted the stamp with actual Brexit date “31.1.2020,” crossed out the old date and placed it on sale Jan. 31.

This overprinted Brexit stamp received a lot of media attention, and it sold briskly. Austria Post’s online shop soon appeared to be sold out, and examples on eBay were selling for $10 each and more.

The stamp may not be sold out completely, though. In response to a question from Linn’s about the availability of the Brexit stamp, a spokesman for Austria Post’s philatelic service, Sammler-Service, said: “Due to high global demand, this stamp is for the most part out of stock.

“However, orders can be directed [by email] to sammler-service@post.at, the request can still be taken into account when stocks become free.”

Anita Kern’s designed this Brexit stamp. In addition to the aforementioned dates, the design includes a map that shows EU countries in dark blue, countries that don’t belong to the EU in white, and the United Kingdom in light blue.

In the press release announcing the overprinted Brexit stamp, Austria Post said “to emphasize the special position visually, the area of the United Kingdom was provided with a light blue transparent varnish.”

According to the same press release, the dark blue was printed using the normal offset process.