Austria has political drama, too, and a new stamp embodies it 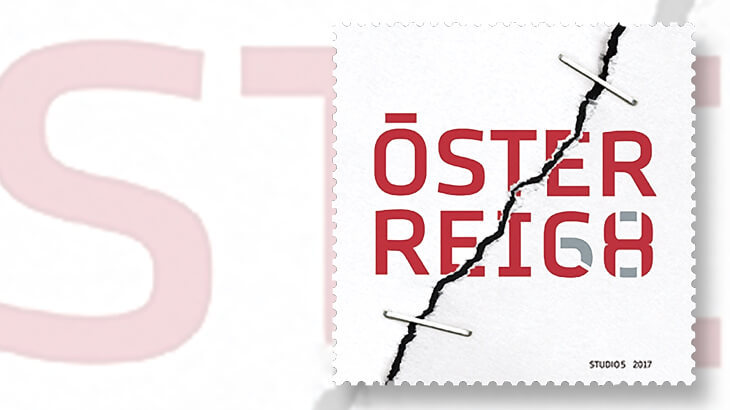 Hannes Glantschnig’s design for this Austrian stamp was inspired by the political division reflected in that country’s recent presidential election.

A new stamp from Austria doesn’t shy away from current politics.

In fact, the designer of the stamp admits that his inspiration came from news headlines about how Austria’s recent presidential election was causing a rift in the country.

Austria Post describes the design as featuring the country name (Osterreich) in red being “rent by a deep tear which is being held together by two staples.” The €0.68 denomination is incorporated into the last two letters of the country name.

The illustration was Hannes Glantschnig’s winning entry in a stamp-design competition sponsored by Austria Post and the daily newspaper Die Presse.

In this competition, designers were given the challenge of presenting a vision of Austria’s future in a 35-millimeter-by-35mm stamp format.

A total of 77 designers participated, and, like Glantschnig, many of them addressed the election or other political topics, such as the refugee crises, in their illustrations, according to Austria Post.

He said, “Even if there is a deep rift running through Austria, we must all do everything we can to heal the breech so that the unity of our land can survive into the future.”

As for the election itself, the European media site Euractiv summed it up in an article posted Jan. 26: “Alexander Van der Bellen who beat the far-right candidate in a presidential election thriller last year, was sworn in today (26 January) just as speculation raged about the future of the government.

“Van der Bellen, 73, narrowly won a run-off against Norbert Hofer from the Freedom Party (FPO) in May [2016] but the anti-immigration party got the result annulled due to procedural irregularities.

“A re-run set for October had to be postponed because of faulty glue on postal votes and after an ugly and divisive campaign Van der Bellen finally won the presidency on 4 December.”

Austria’s president, which is largely a ceremonial post, is elected by popular vote for a six-year term.

Joh. Enschede of the Netherlands printed the stamp by offset in a quantity of 270,000.