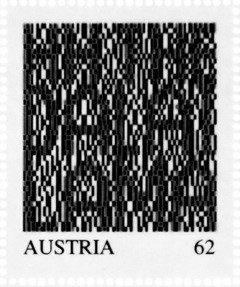 One random-looking stamp on top of the other shows something decidedly less random. 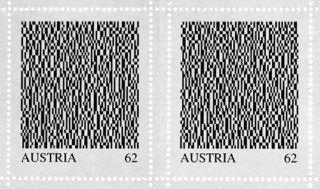 The two personalized stamps produced by visual cryptography. They are similar and yet not the same.

Post offices around the world offer personalized stamps. Usable just like regular stamps with the same value, they display an image chosen by the customer.

The choice of this image is not entirely free, as a Tibet supporter in Austria found out. He ordered personalized stamps from the Austrian post office showing an image consisting of the text "His Holiness the Dalai Lama" and a portrait of the Tibetan leader. Through informal channels he was told that pressure from the Chinese embassy in Vienna had led to the cancellation of the order.

I was looking for a way to get the post office to produce personalized stamps that are at least closely related to the forbidden image.

One method that can achieve this is visual cryptography, invented in 1994 by the Israeli computer scientists Adi Shamir and Moni Naor. From a black-and-white image, two images of the same size are produced that look like random collections of points. If printed on transparencies, these two random-looking images when held on top of each other show the original image with a loss of contrast.

Visual cryptography was used to produce two random-looking images from an image showing the letters "HH THE DALAI LAMA." These two images were then submitted as images for personalized stamps.

If anyone at the post office had held one image on top of the other, I think it is fair to assume that those images would have been refused just like the original one was. It appears that this did not occur to anyone, since the Austrian post office printed 100 stamps each of the two random-looking images.

One stamp moving slowly on top of the other to let the chosen image emerge can be watched in this video:

When visual cryptography is applied to stamps, problems like the small size and nontransparent material have to be dealt with. Personalized stamps
are always printed on white paper rather than on transparencies. This means that the chosen image is only visible if the two stamps held on top of each
other are artificially lit from the back. Furthermore, computer graphics issues involving the file format JPEG and the small size of the stamps meant that black and white rectangles of a certain minimal size had to be used. This, together with the size of the stamps, is the reason I used only the letters "HH THE DALAI LAMA" as the input image for visual cryptography.

These cryptostamps would certainly be more impressive if produced in the printing quality of regular postage stamps and on transparent material. However, one thing is clear. From now on, they will only show designs approved by politicians.