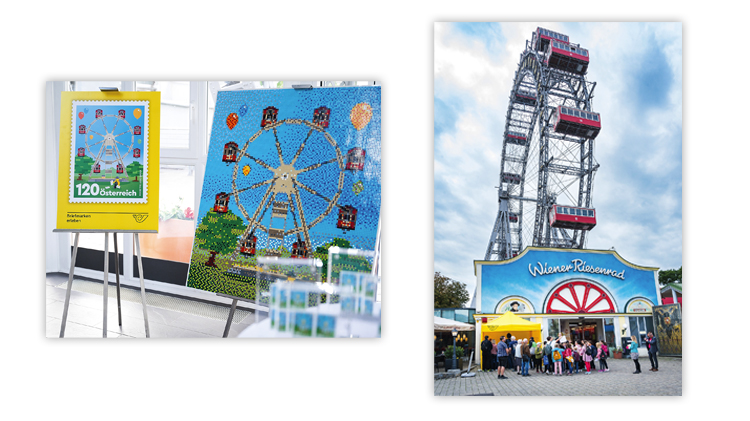 This isn’t the first time I have written about the toy building-brick company the Lego Group, and it probably won’t be the last.

This year, the company is celebrating the 90th anniversary of its founding in 1932. Lego Group launched the plastic Lego brick in its present form 64 years ago, in 1958.

To celebrate, Austrian Post held an event in front of the Ferris wheel for the Sept. 16 stamp launch. Pictured nearby is a poster of the stamp next to a mosaic of the stamp design built using 1x1 Lego plates. The mosaic is pretty impressive in size.

The stamp design features a modification of an existing Lego set for a Ferris wheel shown on a blue background with trees built from Lego bricks. Colorful balloons are also included in the design.

Also shown here is a photograph of Vienna’s famous Ferris wheel with a yellow retail tent for the temporary post office in front of it. Available at the event were panes of the stamp, first-day covers, the cancellation, an information sheet and more.

I also saw a photograph on Austrian Post’s Facebook page showing small chocolate cakes with the stamp design on top.

The stamp’s launch seems like a fun experience for those who attended.

Cartor Security Printing printed 450,000 of Austria’s 90 Years of Lego stamps in panes of 10 with decorative selvage. The stamp carries a denomination of €1.20 and measures 30 millimeters by 40mm.