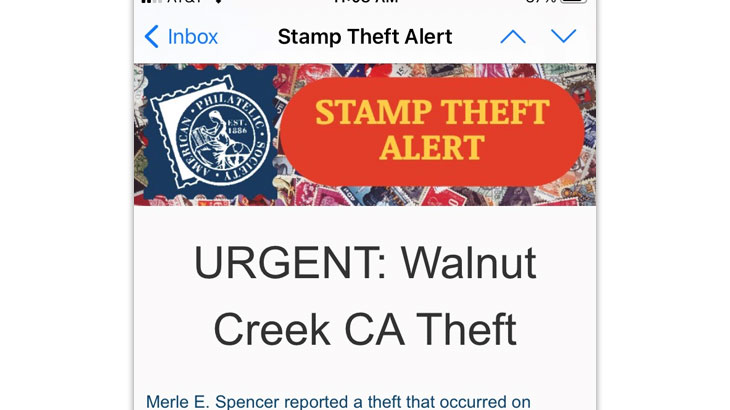 In an alert distributed Nov. 10, the American Philatelic Society said the theft occurred at dealer Merle Spencer’s store Nov. 5 between 4:30 p.m. and 6 p.m.

Stamp dealer Merle E. Spencer reported a theft from his store in Walnut Creek, Calif., according to the American Philatelic Society.

“The items stolen were the three most expensive plastic binders of his material,” according to the APS. “Each of the three binders was about one inch thick and included 20-23 Hagner pages.”

Spencer reportedly has color photocopies of most of the U.S. items stolen.

Officer Villa of the Walnut Creek Police Department took the report of the theft, filed as report No. 2027-743.

The APS asks that anyone encountering this material contact their own local police department, the Walnut Creek Police Department at 925-943-5844, Merle E. Spencer at 925-944-9111, and the APS Stamp Theft Committee at stamptheft@stamps.org.