Beautiful classic stamps from the African republic of Liberia 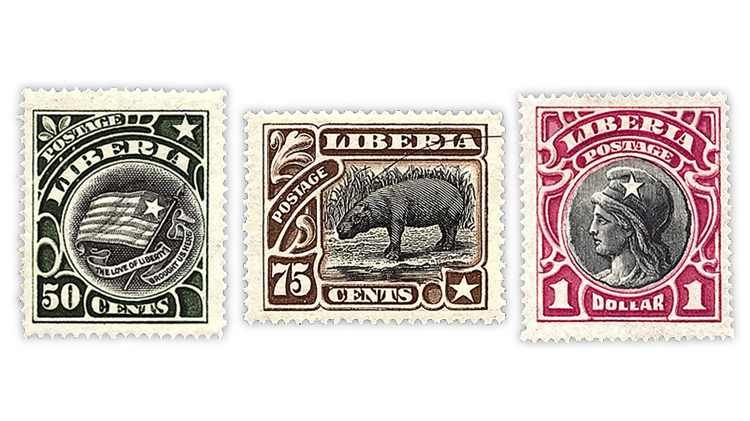 The classic Liberia 1906 set of 13 engraved bicolor definitive stamps is a good buy in unused, hinged condition at 80 percent up to full Scott catalog value.

Classic postage stamps, generally speaking stamps issued from 1840-1940 or to the end of the reign of King George VI for British and British Empire stamps, are avidly collected by many. The engraved designs, vivid colors and interesting subjects are an irresistible draw for many philatelists.

It can be argued that no country issued more truly beautiful classic stamps than the Republic of Liberia.

Liberia was founded beginning in 1822 on the west coast of Africa by the American Colonization Society. From that year until 1861, about 15,000 free American Black people and more than 3,000 Afro-Caribbean people colonized Liberia.

Liberia declared its independence on July 26, 1847, and was accorded de jure recognition by the American government on Feb. 5, 1862. In 1900, it was one of only two independent countries in sub-Saharan Africa, the other being Ethiopia.

Liberia issued its first postage stamps in 1860. In 1906, Liberia issued a set of 13 definitive stamps (Scott 101-113). The engraved bicolor designs feature an elephant, a great blue touraco, an agama, an egret, a pygmy hippopotamus and Mandingo people.

Other subjects include Mercury, the messenger of the gods; a Liberty head coin; an allegorical figure of Liberty with a star of Liberia on her cap; the Liberian flag; and the executive mansion and President Arthur Barclay.

The Scott Classic Specialized Catalogue of Stamps and Covers 1840-1940 values the set in unused, hinged condition at $72.85. A set in canceled-to-order condition is valued at just $12.30. Postally used examples are scarce and considerably more expensive.

An unused, hinged set in very fine grade is a good buy at 80 percent up to full Scott catalog value. Canceled-to-order sets can be found for $10 or less.

The 4¢ brown Grant stamp is a good buy