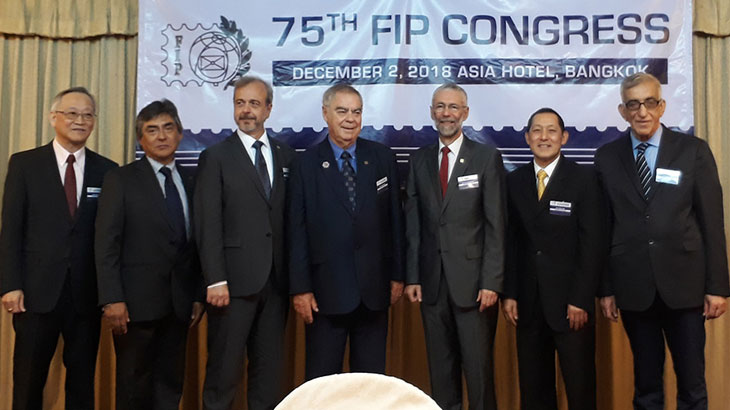 Bernard Beston (fourth from the left) of Queensland, Australia, was elected president of the FIP. From left to right, the board members are: Richard Tan; Aldo Samame y Samame; Reinaldo Macedo; Bernard Beston, Bernard Jimenez; Prakob Chirakiti and Yigal Nathaniel. Photo courtesy of the FIP.

Bernard Beston of Queensland, Australia, was elected president of the FIP at the federation’s 75th Congress in Bangkok, Thailand.

Beston will replace outgoing president Tay Peng Hian, who has held the office for eight years.

Beston is a collector and exhibitor of postal stationery and postal history, with additional interests that include aerophilately and revenues. He recently served as FIP vice president.

Beston was challenged for the presidency in this election by Chris King of England, the former president of the Royal Philatelic Society London and a signatory to the Roll of Distinguished Philatelists.

Prakob Chirakiti of Thailand was elected FIP vice president for Asia, and Richard Tan Eng Chuan of Singapore was named director for Asia.

Officers and other members of the FIP board are elected for four-year terms and may serve for only two terms in the same position.

Additional information about the FIP can be found online.