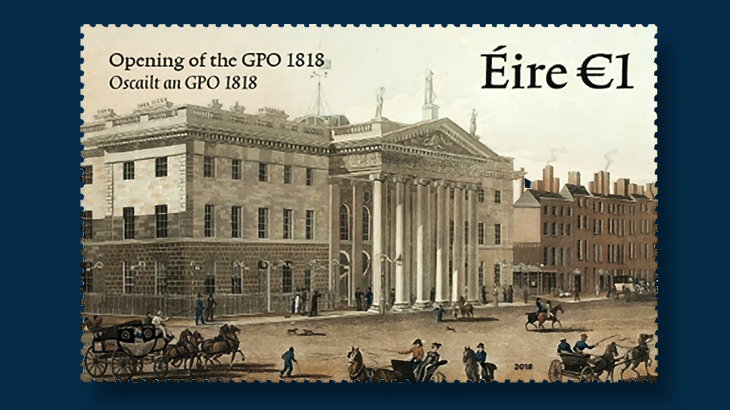 A new Irish commemorative celebrates the 200th anniversary of the general post office in Dublin.

Ireland’s An Post issued a €1 stamp Jan. 11 to commemorate the 200th anniversary of the general post office in Dublin.

On the history section of its website, An Post said of the building’s significance: “Dublin’s GPO is indelibly associated with the 1916 Rising and the events that led to the creation of an independent Irish state. The stern grandeur of its facade, Irish flag flying proudly aloft, is an image that evokes a justifiable sense of heroism and nationhood.

“In the course of its long history, the GPO has witnessed much more than the events of Easter Week. The foundation stone was laid by Lord Whitworth on the 12th August 1814 with £60 spent on entertainment for the occasion. The architect was Francis Johnston whose considerable abilities place him in the first rank of Irish architects. “

The image shown on the stamp is from an 1820 engraving by Robert Havell and Son.

The French security printer Cartor printed the stamp by lithography in sheets of 16.