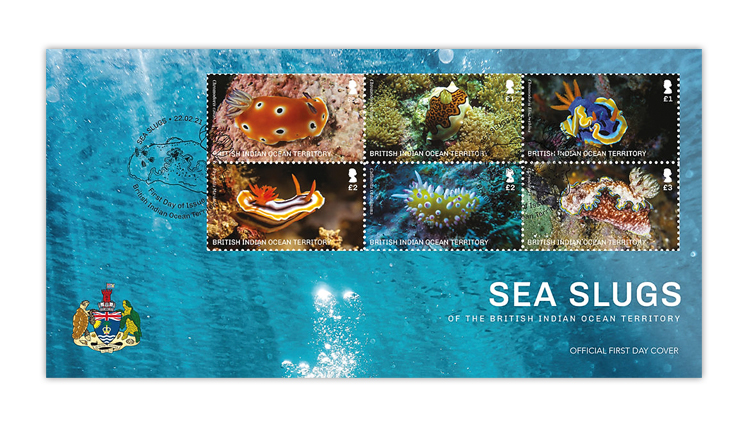 The British Indian Ocean Territory issued a set of six stamps featuring sea slugs on Feb. 22. These stamps, shown here on a cacheted BIOT Post Office first-day cover, are likely to be the last issued by the territory.

The British Indian Ocean Territory may have already issued its last stamps, and its future as a stamp-issuer is scheduled to be determined at the congress of member countries of the Universal Postal Union in August.

The UPU is the United Nations specialized agency on postal matters.

Both the United Kingdom and Mauritius claim sovereignty over this archipelago of more than 50 islands in the central Indian Ocean, also known as the Chagos Islands or Archipelago.

In that dispute, the United Nations’ International Court of Justice, the U.N. General Assembly and the International Tribunal for the Law of the Sea have upheld Mauritius’ claim.

The U.N. General Assembly’s resolution 73/295 adopted May 22, 2019, says that “the United Kingdom is under an obligation to bring to an end its administration of the Chagos Archipelago as rapidly as possible,” and also that its specialized agencies, such as the UPU, are “to recognize that the Chagos Archipelago forms an integral part of the territory of Mauritius, to support the decolonization of Mauritius as rapidly as possible, and to refrain from impeding that process by recognizing, or giving effect to any measure taken by or on behalf of, the ‘British Indian Ocean Territory.’”

And that is why the stamps of the territory will be discussed at the UPU’s 27th Universal Postal Congress Aug. 9-27 in Abidjan, Ivory Coast.

In a May 16 article headlined “UN favours Mauritian control over Chagos Islands by rejecting UK stamps,” the British newspaper The Guardian said, “Referencing the court decisions, the UPU council of administration recommended that its 192 member countries ‘cease the registration, distribution and forwarding of any and all postage stamps issued by the territory …’”

The British Indian Ocean Territory was established as a British overseas territory Nov. 8, 1965. The first postage stamps were issued in 1968, and the most recent were released Feb. 22 of this year. Those six se-tenant (side-by-side) stamps picture colorful sea slugs found in the territory.

The British Indian Ocean Territory currently has no permanent population, however there is a joint United States-United Kingdom military base on the largest island, Diego Garcia.

The BIOT Post Office website says that it “provides outbound postal services from the island of Diego Garcia. Incoming mail is handled by both the US Postal Service and the British Forces Post Office.”

The BIOT office is “managed by the Foreign and Commonwealth Office of the British Government and is operated on its behalf by Sure (Diego Garcia) Limited,” according to the aforementioned website.