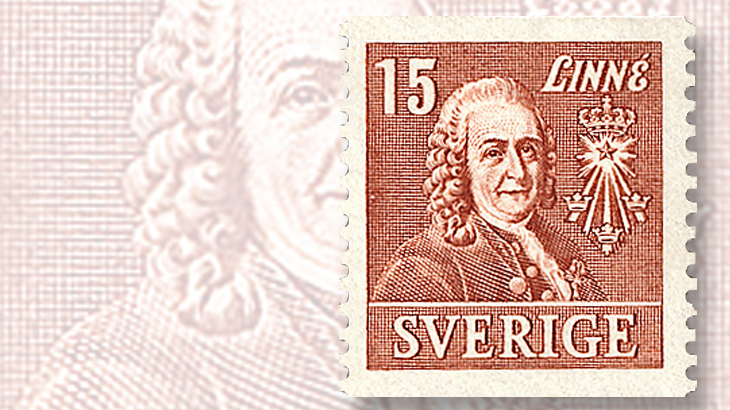 Carolus Linnaeus (Carl von Linne) on a 15-ore stamp issued by Sweden in 1939.

He studied to become a physician, but is known primarily as a botanist and zoologist who developed the system of taxonomy that classifies living organisms into various kingdoms that can then be refined into phylum, class, order, gamily, genus and species. He introduced a system of binomial or scientific names by which all organisms are known, such as Leopardus pardalis for the ocelot, for example. He is also considered to be a founder of the science of ecology.

Linnaeus studied at Uppsala University where he eventually would become professor of medicine, and later, of botany. Throughout his lifetime he discovered, studied and classified plants and animals. He moved to the Netherlands in 1735 and first published his Systema Naturae there. He traveled in Europe conducting his studies, returning to Sweden in 1738.

In 1761 he was knighted by King Aldof Frederick of Sweden, taking the name Carl von Linne.

Linnaeus died at age 70 in 1778. He was honored on 15-ore Swedish stamps issued in 1939 (Scott 296 and 298), and has been the subject of additional stamps issued by Sweden and other countries over the years.