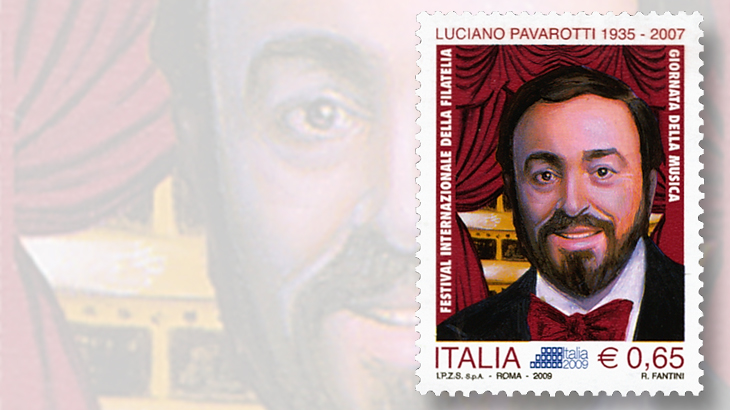 Famous Italian tenor Luciano Pavarotti was honored on this stamp issued by Italy in 2009.

Of the many great opera singers of the 20th century, the most recognized today is probably tenor Luciano Pavarotti, who was born Oct. 12, 1935, in Modena, Italy.

Pavarotti’s father, a baker, was also an amateur singer whose love of opera inspired his son. But in his youth, Pavarotti hoped to become a soccer goalkeeper, and though he underwent vocal training, he also taught elementary school for two years.

At age 19, he traveled with his father to Wales as members of a chorus that won first prize in an international singing competition. That success renewed his desire to establish a career in opera — a career that eventually brought him worldwide fame of such magnitude that he was easily recognized internationally, even by many who never pursued opera as entertainment.

In his later years, Pavarotti teamed with Placido Domingo and Jose Carreras as the Three Tenors, drawing in new fans with best-selling albums and concert tours. Beginning in the 1990s, his recognition expanded even further as he performed in charity events and recordings billed as “Pavarotti and Friends,” with popular and established stars such as Elton John, Eric Clapton, Celene Dion, James Brown and many others.