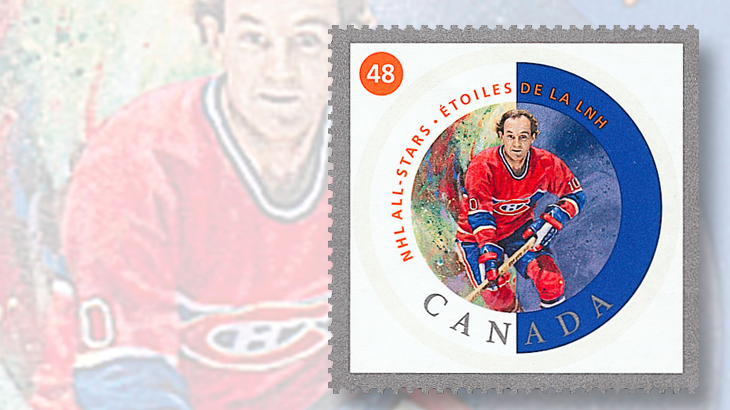 Canada's 48¢ stamp honoring hockey legend Guy Lafleur was issued in 2002. The honor for Lafleur was repeated in 2009 when he appeared on a $3 stamp.

Born Sept. 20, 1951, in Thurso, Quebec, Guy Lafleur is one of Canada’s most renowned professional hockey stars. His fame is such that the living legend has twice appeared on Canadian stamps: as part of the first National Hockey League Stars set of six 48¢ stamps issued Jan. 12, 2002 (Scott 1935b), and again on Oct. 17, 2009, on a $3 stamp with special three-dimensional plastic overlay that shows Lafleur in a brief action scene (2340c).

The 2009 stamp commemorates the 100th anniversary of the Montreal Canadiens and Lafleur’s accomplishment at right wing of scoring 500 goals. In his 17-year NHL career he scored 560 goals and became the first player to score 50 goals and 100 points in six consecutive seasons, from 1974 to 1980, with the Canadiens.

Lafleur played for the Canadiens for most of his professional career. After retiring in 1985, he was inducted into the Hockey Hall of Fame, and then returned to play the game for three more seasons: one with the New York Rangers and two with the Quebec Nordiques.

In 1980, Lafleur was appointed an officer of the Order of Canada. He became a knight of the National Order of Quebec in 2005.