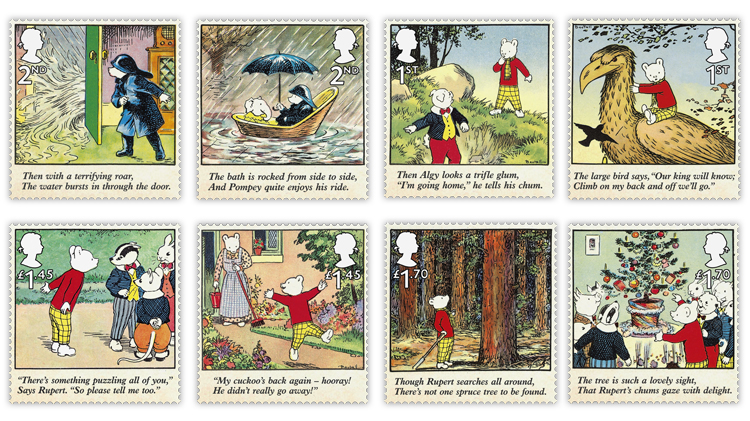 Great Britain’s Royal Mail issued eight stamps Sept. 3 to celebrate the 100th anniversary of Rupert Bear. The children’s comic strip character made his debut Nov. 8, 1920, in the Daily Express newspaper. The new stamps show illustrations created from 1944 through 1963 featuring the bear and his chums on their adventures.

Great Britain’s Royal Mail has issued eight stamps Sept. 3 for the 100th anniversary of the revered Rupert Bear comic, which first appeared in the Daily Express in 1920.

According to the Royal Mail, the character was so popular “...that even in paper rationing during the Second World War, the government sanctioned sufficient paper for the annuals to be printed, to help boost the morale of the public.”

The cuddly character lives in the town of Nutwood with his parents, Mr. and Mrs. Bear, and now appears in many forms of media, including books, movies and TV.

The stamp illustrations were created by Alfred Bestall (1892-1986), who wrote and illustrated more than 270 Rupert stories beginning in 1935.

The eight stamps are situated in four se-tenant (side-by-side) pairs. Each pair features two illustrations from one of Rupert’s adventures and includes rhyming lines of verse from the tale. For example, one of the stamps illustrating Rupert’s Christmas Tree contains the verse: “The tree is such a lovely sight / That Rupert’s chums gaze with delight.”

Rupert and the Lost Cuckoo (1963) is displayed on the pair of £1.45 stamps paying the rate for mail to Europe weighing up to 20 grams and the worldwide rate for letters up to 10 grams.

The £1.70 pair features Rupert’s Christmas Tree (1947). This denomination is the rate for mail to Europe weighing up to 100 grams and the worldwide rate for letters up to 20 grams.

Other products offered by Royal Mail in conjunction with the Rupert Bear issue include postmarks, first-day covers, a presentation pack and eight postcards featuring enlargements of each stamp in the set. The presentation pack includes the stamps and an illustrated informative foldout detailing the 100-year history of the beloved character.

In addition to the set of all eight designs, each pair is available in full sheets (60 stamps) and half sheets (30 stamps).

The seventh stamp is in souvenir sheet on one. This £3 stamp shows Rupert seated.

The island has a direct connection to the comic; Rupert’s creator, Mary Tourtel, was married to Guernseyman Herbert Tourtel.

For more information on the stamps and related products, visit. www.guernseystamps.com.