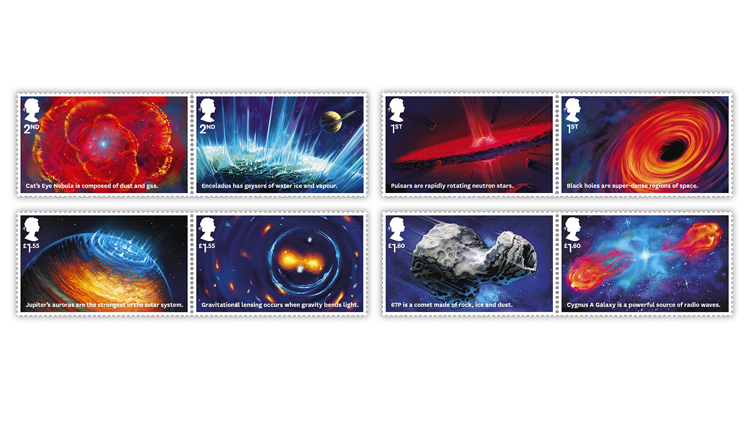 Great Britain’s Royal Mail is presenting astronomical features and phenomena studied by British astronomers and astrophysicists on a new set of stamps called Visions of the Universe. The eight stamps are being issued Feb. 11 in four se-tenant pairs. 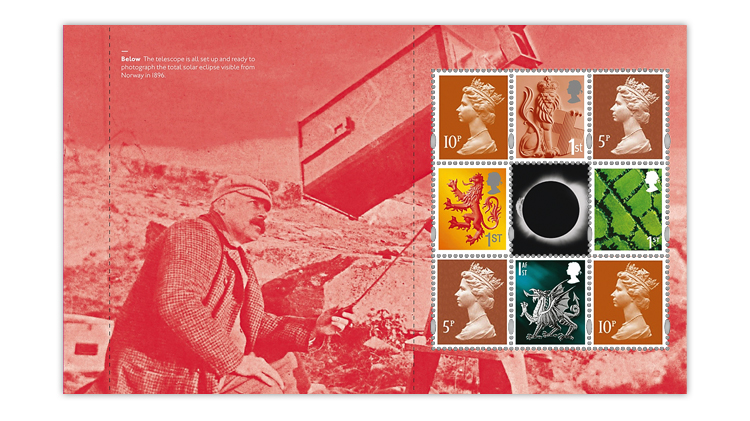 The Visions of the Universe prestige booklet tells the story of the Royal Astronomical Society, which is celebrating its 200th anniversary this year. One of the four stamp panes in this 24-page booklet includes four Queen Elizabeth II definitives and four
Previous
Next

Great Britain’s Royal Mail is commemorating the 200th anniversary of the Royal Astronomical Society by issuing eight stamps and a prestige booklet Feb. 11.

Royal Mail calls this issue Visions of the Universe and describes the stamps as showing “stunning images depicting astronomical features and phenomena studied by British astronomers and astrophysics over the centuries.”

Philip Diamond, executive director of the Royal Astronomical Society, said: “This striking and attractive set of stamps reflects the drama of the universe around us. I’m delighted that our bicentenary year is marked by a genuine collector’s item combining tradition with contemporary science.”

The stamps are in four se-tenant (side-by-side) pairs. The 24-page prestige booklet includes four panes of stamps along with pages featuring illustrations and text.

The pair of nondenominated second-class stamps show the Cat’s Eye nebula and geysers on Enceladus, the sixth largest of Saturn’s many moons.

Both men were presidents of the Royal Astronomy Society. Herschel was the first president, serving from 1821 until his death on Aug. 25, 1822. Huggins was president from 1876-78.

Herschel discovered Enceladus in 1789. This moon’s geysers were discovered in 2005 during the Cassini-Huygens mission, a joint project of NASA, the European Space Agency and the Italian Space Agency.

In its new-issue announcement, Royal Mail explained the British connection: “The geysers were found after the British-built magnetometer instrument on NASA’s Cassini spacecraft began sending back puzzling results indicating that Enceladus possessed a thin atmosphere. Michele Dougherty of Imperial College persuaded NASA to skim the space probe over the moon’s surface to take a closer look. In the process, the cameras revealed the geysers. Subsequent investigations have found that the geysers are fed by a subsurface ocean in which the water contains the molecular building blocks of life.”

Pulsars and black holes are represented on the two nondenominated first-class stamps. The inscriptions on the stamps provide basic definitions of these objects, calling pulsars “rapidly rotating neutron stars” and black holes “super-dense regions of space.”

Jocelyn Bell (later Bell Burnell) and Anthony Hewish discovered pulsars in 1967. At the time, Bell was a graduate student in astronomy at Cambridge University working with Hewish.

Royal Mail said: “Working with a pioneering radio telescope that Hewish had designed, Bell spotted a celestial radio pulse coming from the sky every 1.3 seconds. Baffled at first by the mysterious signal, the two jokingly named it LGM-1, which stood for Little Green Men.”

Bell Burnell was president of the Royal Astronomy Society from 2002-04.

Among the scientists who have studied black holes is British theoretical physicist Stephen Hawking (1942-2018). In an article on black holes, the NASA Science website said that one of Hawking’s “contributions was a theory that a black hole is not so dense in a quantum mechanical sense. The slow leak of what’s now known as Hawking radiation would, over time, cause the black hole to simply evaporate.”

Hawking was awarded the Royal Astronomical Society’s gold medal in 1985.

The two £1.55 stamps visually explore the subjects of Jupiter’s auroras and gravitational lensing.

Jupiter, the largest planet in our solar system, produces the strongest auroras. However, the power behind Jupiter’s northern and southern lights remains a mystery. A team of astronomers at the University of Leicester continues to study this phenomenon, according to Royal Mail.

The inscription on the stamp says that gravitational lensing “occurs when gravity bends light.” Albert Einstein wrote about the possibility of gravitational lensing as early as 1912, but it wasn’t confirmed until 1979 “when an Anglo-American team of astronomers that included Dennis Walsh and Bob Carswell discovered two distorted galaxies side by side that on closer inspection appeared to be identical,” Royal Mail said.

The comet known as 67P/Churyumov-Gerasimenko is pictured on one £1.60 stamp, and the Cygnus A galaxy on the other.

The former stamp is inscribed, “67P is a comet made of rock, ice and dust.”

The Advanced Science News website explained the significance of this comet: “In August 2014, after a ten year voyage through the solar system, Rosetta became the first spacecraft to orbit a comet, catching up with 67P/Churyumov–Gerasimenko (67P/C-G) (67P indicates that it was the 67th periodic comet discovered, and Churyumov and Gerasimenko are the names of its discoverers) on its own orbit around the sun.”

Another first occurred during that mission: A robotic lander made a soft landing on a comet.

The inscription on the other £1.60 stamp reads, “Cygnus A Galaxy is a powerful source of radio waves.”

An article by Elizabeth Howell about elliptical galaxies published on the Space.com website, said: “One of the most famous elliptical galaxies is Cygnus A, which is located roughly 600 million light-years from Earth and is an extremely bright radio source. Cygnus A is not only well-known to astronomers, but has a place in science fiction; it was featured in the 1985 novel ‘Contact,’ a Carl Sagan story that later inspired a Hollywood movie of the same name.”

The firm True North designed the stamps. Robert Bell collaborated with the Royal Astronomical Society to create the illustrations for the designs.

International Security Printers printed the stamps by lithography in sheets of 60 (sold in panes of 30 at most postal outlets).

Each stamp measures 50 millimeters by 30mm and is perforated gauge 14 by 14.

According to Royal Mail, “The society [Royal Astronomical Society] began on 12 January 1820, when 14 ‘gentleman astronomers’ sat down to dinner at the Freemasons’ Tavern, Lincoln’s Inn Fields, London and conceived the idea of the Society. It now boasts a membership of more than 4,000 astronomers, known as Fellows, and it continues to encourage and promote the study of astronomy and geophysics, as well as other closely related branches of science.”

The Visions of the Universe prestige booklet traces the society’s 200-year history. The text by astronomy journalist Stuart Clark “recalls key British discoveries, recounts recent space missions and charts the growth of astronomical science and geophysics,” according to Royal Mail.

Two of the four stamp panes in the booklet include the new Visions of the Universe stamps, with the second-class Cat’s Eye Nebula, first-class Pulsars, £1.55 Jupiter’s Auroras and £1.60 67P Comet se-tenant on one pane; and the second-class Enceladus, first-class Black Holes, £1.55 Gravitational Lensing and £1.60 Cygnus A Galaxy on the other.

A black hole is depicted on the label in the other pane, which includes four Queen Elizabeth II definitives (two 5p and two 10p) and four first-class country, or regional, definitives for England, Scotland, Northern Ireland and Wales.

Royal Mail is offering several first-day and other covers in conjunction with the stamps, including a combined stamp and coin cover honoring Hawking.

This cover includes the eight Visions of the Universe stamps and an uncirculated 50p coin depicting a black hole. Royal Mail reports that this coin was struck by the Royal Mint in 2019 to commemorate Hawking “who dedicated his career to the universe and its secrets.” Produced in an edition of 7,000, these covers are individually numbered.

In addition, Royal Mail is offering eight postcards reproducing the designs of the stamps and a presentation pack containing the stamp set and providing information about the Royal Astronomical Society and the astronomical phenomena and objects depicted on the stamps.