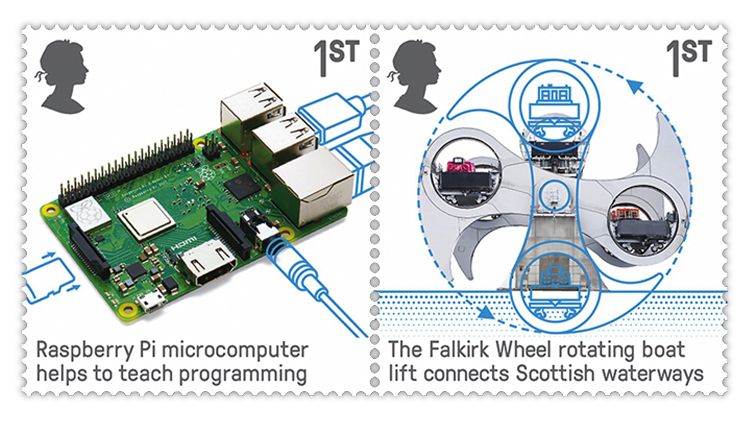 Royal Mail salutes British engineering on 10 stamps issued May 2. The pair of nondenominated first-class stamps features the Raspberry Pi microcomputer and the Falkirk Wheel, the world’s only rotating boat lift. 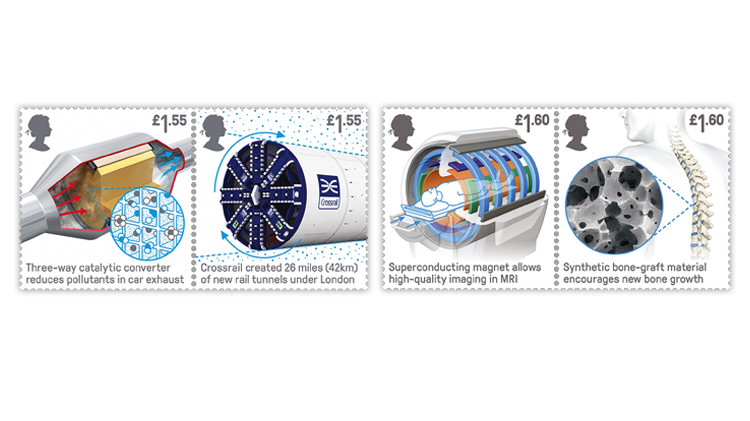 Two other pairs of stamps in the British Engineering set honor a three-way catalytic converter, the tunnel-boring project for Crossrail, superconducting magnets used in MRIs, and synthetic bone-graft material. 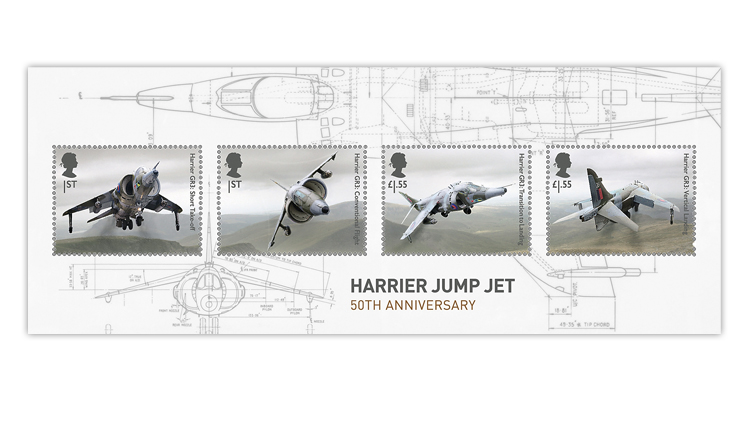 Great Britain’s Royal Mail is recognizing British innovations in engineering of the past half century on a set of 10 stamps issued May 2.

Royal Mail worked with the Royal Academy of Engineering on this stamp set, which includes six stamps in three se-tenant (side-by-side) pairs and a souvenir sheet with four stamps.

Rolls-Royce developed the Pegasus engine used in this aircraft, for which it shared the first MacRobert Award from the Royal Academy of Engineering 50 years ago, in 1969.

Three of the items featured on the stamps in se-tenant pairs also have won the MacRobert Award, the United Kingdom’s most prestigious national prize for engineering innovation.

The Raspberry Pi microcomputer, which received the award in 2017, is honored on one of the two nondenominated first-class stamps.

The 1980 award winner, a three-way catalytic converter developed by Johnson Matthey, is shown on one of the two £1.55 stamps.

One of the £1.60 stamps features Oxford Instruments’ superconducting magnets that enable MRI scanning, the award winner in 1986.

The other stamps in these se-tenant pairs honor the Falkirk Wheel (first-class); the Crossrail tunnels (£1.55), and a synthetic bone-graft substitute (£1.60).

Common Curiosity, a graphic design studio based in Birmingham and London, designed the six stamps, using illustrations by Martin Woodward.

In addition to an illustration, each design includes a brief description of the item.

For example, the first-class Raspberry Pi stamp says that this “microcomputer helps to teach programming.”

The website of the Royal Academy of Engineering (www.raeng.org.uk) mentions other uses: “The bargain micro-PC [it sells for about $35 in the United States] can be used as the control centre of just about anything, from creating your own video games to robots, multi-room sound systems, pet feeders, or even scientific experiments.”

About the size of a credit card, the Raspberry Pi is built on a single circuit board. The nonprofit Raspberry Pi Foundation has sold more than 20 million of these microcomputers since 2012.

Royal Mail provides more information in its press release announcing the stamps, “The Falkirk Wheel is the world’s first and only rotating boat lift, vertically connecting the Forth and Clyde Canal with the Union Canal. The two waterways were once connected by a series of 11 locks, which took almost a day to traverse, but these were dismantled in 1933. As part of the Millennium Link project, the British Waterways Board teamed up with Arup, Butterley Engineering and RMJM architects to reconnect the canals after 70 years with a 21st-century landmark structure.”

The catalytic converter turns the pollutants carbon monoxide, hydrocarbons and oxides of nitrogen into carbon dioxide, water and nitrogen, respectively.

Chris Morgan, technology director at Johnson Matthey, called this stamp a huge honor for “employees past and present who have been involved in Johnson Matthey’s ground-breaking work behind the catalytic converter.”

He added, “Every year, our catalytic converters prevent some 20 million tonnes of pollutants from entering the atmosphere, helping to make the world cleaner and healthier.”

The Crossrail project to create a new 60-mile railway line through London is ongoing, however the tunneling was completed in 2015 after three years of round-the-clock work.

According to the Crossrail website (www.crossrail.co.uk), eight 1,000-ton tunneling machines operated by “tunnel gangs” of 20 workers excavated 3.4 million tons of earth during those three years. Most of the excavated material was used in creating the Wallasea Island Wild Coast Project in Essex.

Royal Mail said: “This revolutionary, non-invasive technique would not be possible without powerful superconducting magnets, which were first developed in the 1960s and in the 1970s applied to body scanning by Sir Martin Wood of Oxford Instruments. The first electromagnet was invented by British scientist William Sturgeon in 1824, and today’s superconducting magnets are based on the same principles.”

Karin Hing and her team at Queen Mary University of London researched and developed bone-graft substitutes and brought them to market, for which she received the Royal Academy of Engineering’s silver medal in 2011.

Hing said of the new stamp: “It was a delightful surprise and a huge honour for my work on synthetic bone grafts to be recognised with a stamp and, in particular, to be part of a set which celebrates some incredible innovations in British engineering. I feel very fortunate that my research has gone on to have such a positive impact on people’s lives, but this would not have been possible without multidisciplinary collaboration. Having our engineering of synthetic bone grafts celebrated on a stamp like the Marvel Comics and the Harry Potter books might even impress my kids.”

The self-adhesive stamps are 35 millimeters by 37 mm each, perforated gauge 14.5 by 14. International Security Printers printed them by lithography in sheets of 60, sold in panes of 30 at most postal outlets.

International Security Printers also printed the souvenir sheet by lithography. The four stamps in this sheet, two first-class and two £1.55, have traditional gum, measure 41mm by 30mm each and are perforated gauge 14.5 by 14.

The souvenir sheet was designed by the Turner Duckworth design firm. Richard Cooke took the photographs of the Harrier GR-3, the first Harrier jump jet, that are pictured on the stamps.

The selvage shows blueprints of the aircraft and is inscribed “Harrier Jump Jet 50th Anniversary.”

The jet was developed in the 1960s by Hawker Siddeley, and began its four decades of service with the Royal Air Force in 1969. The United States and other countries also have used this and later versions of the jump jet.