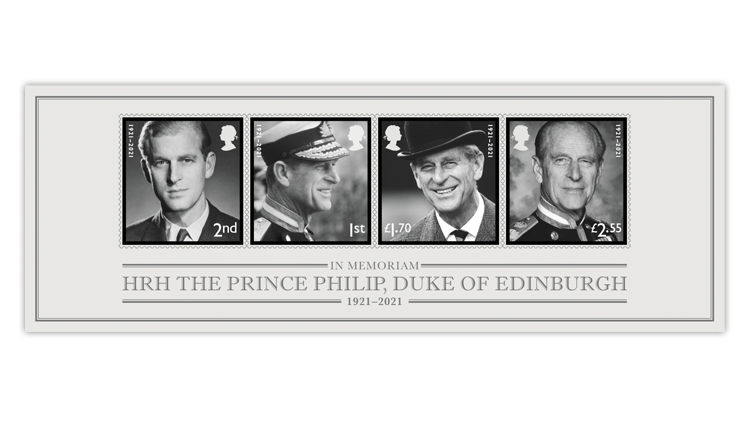 Great Britain’s Royal Mail will issue four portrait stamps in memory of Prince Philip, Duke of Edinburgh, on June 24. The stamps will be se-tenant in a souvenir sheet of four.

Simon Thompson, CEO of Royal Mail, said: ”Throughout adulthood, The Duke of Edinburgh dedicated himself to the service of this country, the Commonwealth and to the many causes he was involved with. For more than seven decades he was at the centre of our national life. His passing is a key moment in our history which we mark with this set of commemorative stamps.”

The four stamps will be se-tenant (side-by-side) in a souvenir sheet of four. Inscribed in capital letters in three lines under the stamps are “In Memoriam/HRH The Prince Philip, Duke Of Edinburgh/1921-2021.”

Neither Philip’s name nor his title appears on the stamps. They are simply inscribed with the years of his birth and death in the upper left on the two nondenominated stamps for the second- and first-class rates, and in the upper right on the £1.70 and £2.25 denominations.

The service indicator or denomination is shown in the opposite corner on each stamp (lower right for the nondenominated stamps and lower left for the £1.70 and £2.25).

As is the tradition for British stamps, an image of the reigning monarch replaces the country name. The silhouette of Queen Elizabeth is in the upper right on the second- and first-class stamps and in the upper left on the other two stamps.

The black-and-white photographs are presented in chronological order in the souvenir sheet, beginning on the second-class stamp with one taken by the photographer known as Baron (1906-56).

The first-class stamp shows Philip in uniform in a photo taken while he was “attending the passing out parade of Prince Andrew at Dartmouth Naval College, Devon,” according to Royal Mail. This parade of cadets who have completed training took place April 2, 1980.

The souvenir sheet is available for pre-order from Royal Mail.

For further information about the life of Prince Philip and his philatelic legacy, see Matthew Healey’s Great Britain Philately column in the May 17 issue of Linn’s.