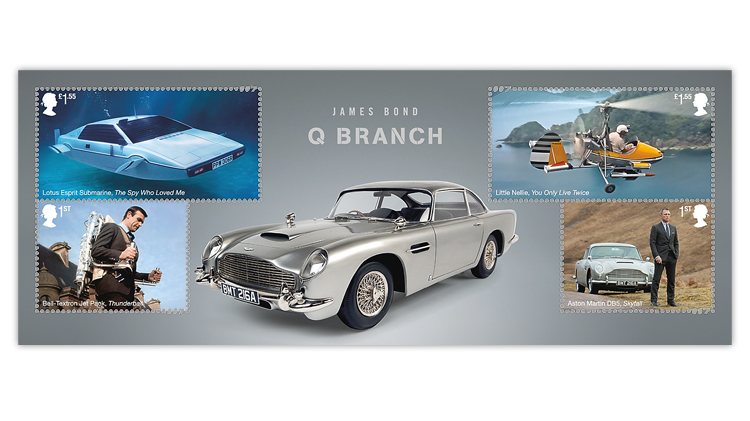 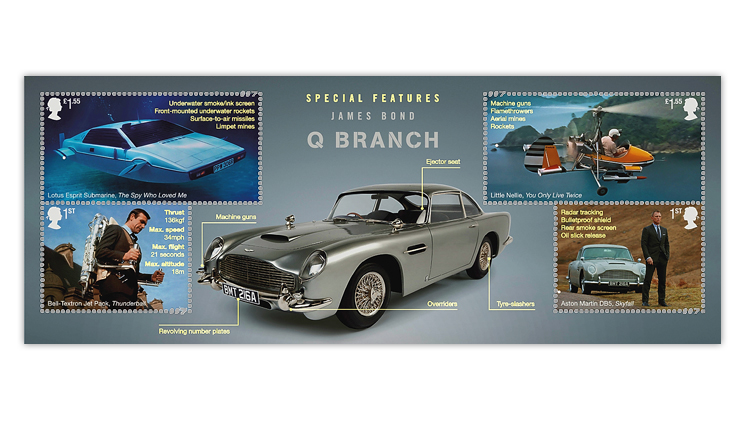 Details about each vehicle are revealed when the souvenir sheet is viewed under ultraviolet light. 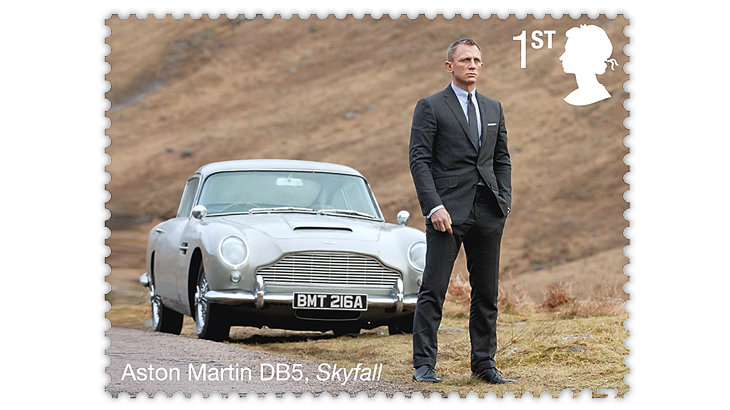 Each stamp in the James Bond souvenir sheet includes one special 007 perforation. This perforation is along the lower right edge on the nondenominated first-class stamp showing the Aston Martin DB5 and Daniel Craig as Agent 007 in Skyfall.
Previous
Next

Great Britain’s Royal Mail will celebrate James Bond films on 10 stamps to be issued March 17. The designs feature actors who have portrayed the fictional secret agent 007 and vehicles from the films.

The vehicles are shown in a souvenir sheet of four stamps, each with one special “007” perforation. The sheet also includes hidden features that can only be seen under ultraviolet light.

Royal Mail revealed the stamp designs Feb. 17 and said that the issue coincides with the release of the 25th film in the Bond franchise, No Time To Die. That film is scheduled to premiere March 31 at the Royal Albert Hall in London, according to Eon Productions’ official James Bond website. The film will be released in cinemas April 2 in the United Kingdom and April 10 in the United States.

Three earlier Bonds are shown on three se-tenant £1.60 stamps: Roger Moore, George Lazenby and Sean Connery. The £1.60 denomination pays the rate for mail to Europe weighing up to 100 grams.

Moore passed away in 2017; the other five actors are still alive.

Royal Mail said these stamps “take inspiration from six key James Bond films across the decades, with the designs a stylistic tribute to the opening titles from each film.”

Ian Fleming introduced the character of James Bond in his 1953 novel Casino Royale. Royal Mail issued a set of six stamps Jan. 8, 2008, honoring this and Fleming’s other Bond novels (Scott 2531-2538).

The first Bond film, based on the 1958 novel Dr. No, was released in 1962, starring Scottish actor Sean Connery.

Connery’s third Bond film, Goldfinger (1964), is featured on a £1.60 stamp. The actor is shown on the right side of the design, and an image based on the title sequence of Goldfinger completes the design.

Australian actor and model George Lazenby was the next movie Bond, starring in On Her Majesty’s Secret Service (1969)

The 007.com website said of Lazenby: “His physical exuberance and energy secured Lazenby the role of Bond but a long-term commitment to 007 never materialised. Lazenby departed the series after just one memorable performance.”

A £1.60 stamp depicts Lazenby and a clock from the opening credits of On Her Majesty’s Secret Service.

The other £1.60 stamp shows English actor Roger Moore in the first of his seven Bond films, Live And Let Die (1973). A skull and flames from the title sequence also are pictured.

Moore’s obituary on the entertainment and arts section of the BBC website began: “Out went the harder, crueller edge of Sean Connery’s 007 to be succeeded by sardonic humour and the inevitable raised eyebrow. …

“His tenure in the role also showcased an array of implausible gadgets and a host of new characters, designed to flesh out Ian Fleming’s original plots.”

A nondenominated first-class stamp pictures Dalton and a woman in sunglasses from the 1987 film’s title credits. In its press release, Royal Mail said: “Timothy Dalton takes on the Bond mantle in this thrilling, lightning-paced adventure. The story draws inspiration from real-life East-West defections and Soviet-Afghan war in Afghanistan, as Bond defeats the ambitious Soviet General Georgi Koskov and a rogue US arms dealer called Whitaker.”

Irish-American actor Pierce Brosnan took over the role of Bond in GoldenEye (1995), which is represented on a nondenominated first-class stamp. The design shows Brosnan and a silhouette of a woman wielding a sledgehammer.

The 007.com website said that Brosnan’s “performance as 007 captured the timeless appeal of the character in a new world of high-technology and post-Cold War intrigue.”

English actor Daniel Craig, who will star in the upcoming No Time To Die, began playing Bond in Casino Royale (2006). The 007.com website said that Craig “brought the danger, seductive rawness and realism to Bond that the 2006 reboot of the series demanded.”

The photographic portrait of Craig is shown just to the left of center on a nondenominated first-class stamp with symbols of playing card suits behind him.

The souvenir sheet is titled “James Bond Q Branch” with those words appearing in the center selvage above an image of Bond’s iconic silver Aston Martin DB5, which was introduced in the film Goldfinger. (Q Branch, also called Q Division, is the fictional research and development division of the British Secret Intelligence Service.)

A nondenominated first-class stamp at lower right on the souvenir sheet shows the Aston Martin DB5 and Craig as Bond in Skyfall (2012).

The other first-class stamp in the sheet depicts Bond (portrayed by Connery) gaining altitude with a Bell-Textron jet pack strapped to his back in Thunderball (1965).

On each of these first-class stamps, the special 007 perforation is in the lower right corner.

The two stamps at the top of the sheet are each denominated £1.55, which pays the rate for letters to Europe that weigh up to 20 grams.

The £1.55 stamp on the left shows the Lotus Esprit submarine car from The Spy Who Loved Me (1977), and the stamp on the right depicts the Wallis WA-116 Agile autogiro nicknamed “Little Nellie” from You Only Live Twice (1967).

The 007 perforation is at upper right on the Lotus Esprit Submarine stamp and at upper left on the Little Nellie stamp.

When the souvenir sheet is viewed under UV light, lists of the vehicle specifications are revealed. For example, the Aston Martin DB5 includes “radar tracking,” a “bulletproof shield,” a “rear smoke screen” and an “oil slick release.”

The London-based agency Interabang designed the stamps and the souvenir sheet. International Security Printers printed them by lithography.

One is a prestige booklet called “The Making of James Bond 007.” Royal Mail describes this 24-page booklet as “packed full of fascinating Bond facts and behind-the-scenes insight into the filmmakers, action and stunts, supporting cast and more.”

The booklet includes four panes of stamps, three of which present the 10 stamps from the new issue. The fourth pane contains Queen Elizabeth II and country (regional) definitive stamps.