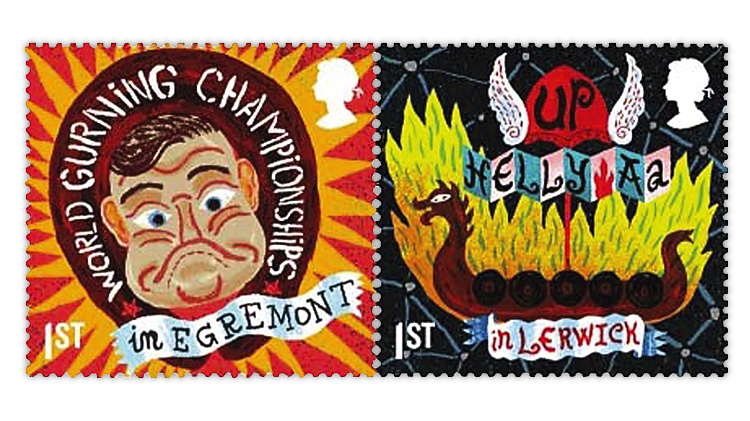 Represented on the pair of nondenominated first-class stamps are the World Gurning Championships in Egremont and Up Helly Aa in Lerwick. Gurning is a tradition that involves making faces. 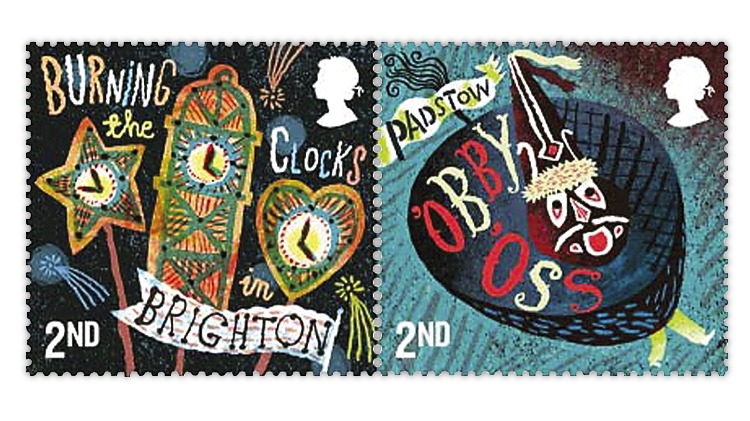 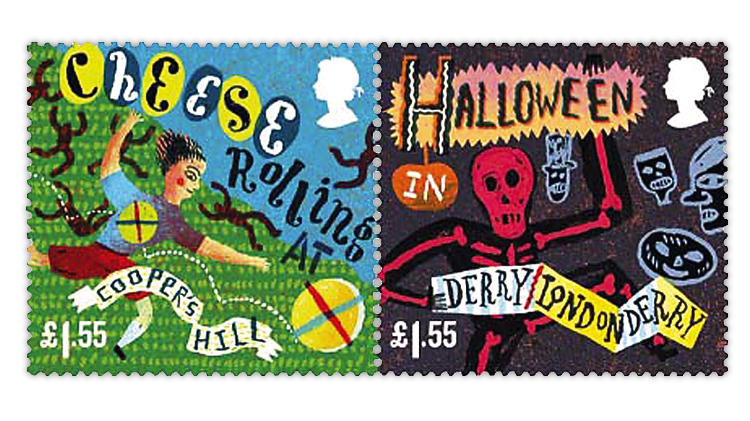 The pair of £1.55 stamps commemorates the cheese rolling competition at Cooper’s Hill, Brockworth, and the weeklong Halloween festival in Derry/Londonderry. 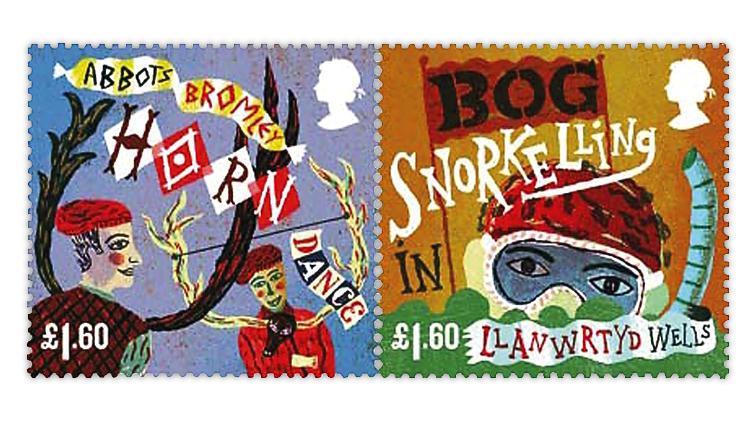 Pictured on the two £1.60 stamps are scenes from the Horn Dance at Abbots Bromley and bog snorkeling at Llanwrtyd Wells.
Previous
Next

In announcing the new Curious Customs set, Royal Mail said that the eight colorful and engaging illustrations capture the “spirit of well-known and some not so well-known customs that take place around the UK each year.”

Royal Mail added, “Many of these customs involve dancing, singing, dressing up and — literally — playing with fire.”

Designed by NB Studio, using illustrations by Jonny Hannah, the stamps were printed by International Security Printers in se-tenant pairs.

The pair of nondenominated second-class stamps represents a winter solstice festival in Brighton called Burning the Clocks and a May Day festival in Padstow called ‘Obby ‘Oss (local dialect for hobby horse).

A relatively new custom, Burning the Clocks dates to 1933 when it was established by a community arts charity.

That charity, Same Sky, said on its website: “Burning the Clocks is a unique community event held on the 21st of December, created by Same Sky, that brings the whole city together to mark the shortest day of the year. Local people make their own paper and willow lanterns, using our kits, and after parading through the city, they pass them into a blazing bonfire on Brighton beach, as a token of the year’s end.

The stamp design features clocks in different shapes, including a heart and a star.

The other second-class stamp shows one of the two creatures called osses from the Padstow festival. Nobody knows when the tradition originated, but when it was first documented in 1803 it was already believed to be centuries old.

A Cornwall tourism site describes this May Day event: “Locals spend the night decorating the town’s streets with flags, flowers and greenery complete with a maypole and the following morning two ‘osses,’ one red and one blue emerge from their stables. The ‘osses,’ swirling and dancing proceed through Padstow’s streets taunted by a Teazer, who leads the dance with theatrical movements. … Last, but not least, are the followers, young and old who join the procession every year singing of the traditional May Song.”

The two nondenominated first-class stamps feature a competition of making faces and a fire festival, respectively.

In Britain, gurning refers to making a distorted face, and the World Gurning Championships are held each year as part of the Egremont Crab Fair. One of the oldest fairs in the world, it was established in 1267.

A website for Cumbria said of the gurning championships: “The competition consists of people making grotesque faces while sticking their heads through a horse’s collar. The winner is the person receiving the largest amount of applause from the audience.”

The design depicts a man’s head in a horse collar.

Several fire festivals, called Up Helly Aa, pay tribute to the Viking heritage of the Shetland Islands. The largest of these is held each year on the second Tuesday of January in Lerwick, the main town on the islands.

In addition to people dressed like Vikings carrying torches, the Up Helly Aa procession includes a full-size wooden Viking longship, which is set on fire at the end of the festivities.

One of the two £1.55 stamps depicts a cheese rolling competition at Cooper’s Hill in Brockworth. The other features a skeleton representing the world’s biggest Halloween Party in Derry/Londonderry, Northern Ireland.

The tradition of chasing large wheels of cheese down Cooper’s Hill is believed to date back centuries, perhaps to Roman times, but in recent times has been held in conjunction with the Spring Bank Holiday.

In fact, the Time and Date website includes the following description of this often dangerous event on its page about the public holiday in late May: “On Cooper’s Hill in Brockworth, Gloucestershire, people race down a steep hill following a large round cheese. The hill is concave and has an incline of 1:1 in some places. The first person to cross the finishing line wins a Double Gloucester cheese weighing about 8lbs (around 3.5kg).”

The event called Derry Halloween isn’t just a one-day festival; this year it will take place Oct. 26 through Nov. 1. It is expected to attract as many as 100,000 people from throughout the world to watch parades and fireworks, to take ghost walks around the walled city and to participate in about 100 other events at 40 venues.

Local pubs started the festival in the 1980s, and in 2015 it was named as the world’s best Halloween celebration in a USA Today reader’s choice poll.

Rounding out the Curious Customs set is a pair of £1.60 stamps showing participants in a horn dance and a bog snorkeling competition.

The Horn Dance at Abbots Bromley is named for reindeer antlers that have been carbon-dated to around the year 1000.

The village’s website said, “The Abbots Bromley Horn Dance, performed at the Barthelmy Fair in August 1226, is one of the few ritual rural customs to survive the passage of time.”

Today, the dance is performed in early September by six men carrying the reindeer antlers and by characters dressed as Maid Marian, a fool, a hobby horse and a bowman.

Bog snorkeling is a modern sport; the first event was held in 1976 near Llanwrtyd Wells. Now, the Welsh town hosts the World Bog Snorkeling Championship each August.

Lonely Planet, a travel guide publisher, has included bog snorkeling on a list of 50 must-do events. The website explains the event’s rules: “The mucky endurance test challenges contestants to swim two lengths of a 55-metre-long [about 180 feet] trench, with only flippers and a snorkel to help them through the quagmire. Conventional swimming strokes are not allowed.”

The stamps were printed by lithography in sheets of 60 (sold in panes of 30 at most postal outlets). Each stamp measures 37 millimeters by 35mm and is perforated gauge 14 by 14.5.

In addition to the stamps, Royal Mail is offering first-day covers, eight postcards reproducing the designs of the stamps, and a presentation pack.

The presentation pack includes the eight stamps; information about the customs by folklorist Steve Roud, who worked with Royal Mail on this stamp issue; and the poem Customs and Exercise by Matt Harvey, which Royal Mail commissioned for the issue.