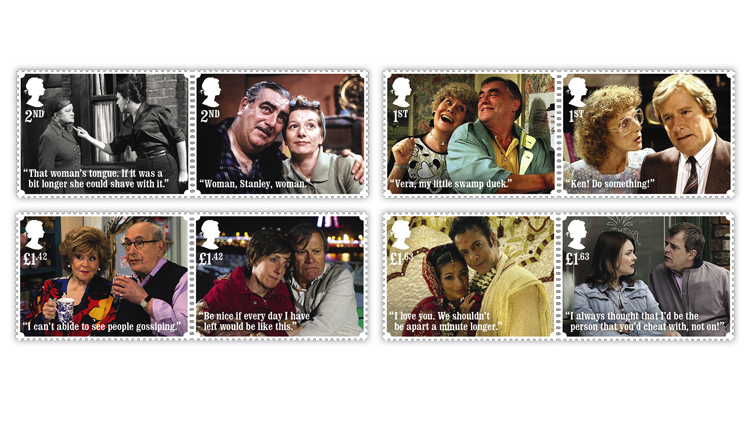 The world’s longest-running soap opera, Coronation Street, debuted Dec. 9, 1960, in Great Britain and is still on the air. Royal Mail honors the show’s 60th anniversary on stamps being issued May 28. Eight of the stamps (in four se-tenant pairs) picture s 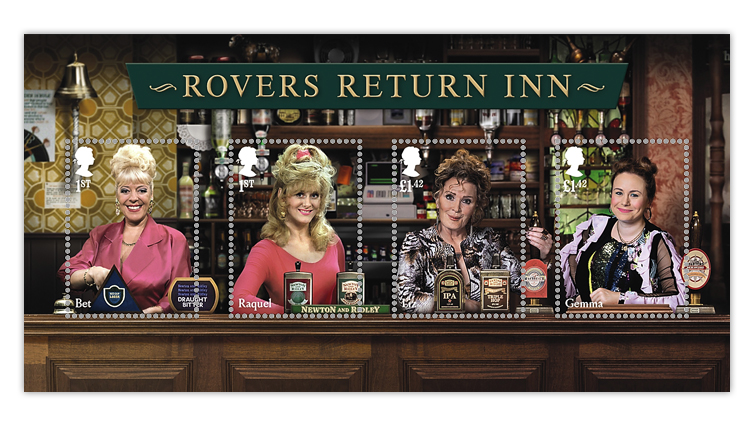 The souvenir sheet in Royal Mail’s Coronation Street set features four characters who have worked behind the bar at the Rovers Return Inn pub.
Previous
Next

Coronation Street follows the lives of the residents of the fictional town of Weatherfield in northwestern England.

The stamps feature photographs of a few of the more than 5,000 characters that have appeared on the show.

Couples are pictured on eight of the stamps, issued in four se-tenant (side-by-side) pairs. Each of these stamps includes a quote that captures “the essence of the characters’ connection — from loving partnership to love-hate relationship,” according to Royal Mail.

The other four stamps are se-tenant in a souvenir sheet and picture characters who have tended bar at the show’s pub, Rovers Return Inn.

One stamp in the set shows a scene in black-and-white featuring two of the show’s original characters: Ena Sharples (played by Violet Carson, 1898-1983) and Elsie Tanner (Pat Phoenix, 1923-1986). The quote on this nondenominated second-class stamp reflects their adversarial relationship.

The other second-class stamp in this se-tenant pair depicts the working-class couple Stan (Bernard Youens, 1914-84) and Hilda (Jean Alexander, 1926-2016) Ogden.

He is listed by Guinness World Records as the “longest-serving TV soap star.” The entry for Roache also says that he “holds the record for longest time to play the same role in any TV series.”

The first stamp in the £1.42 pair shows Rita Sullivan (Barbara Knox) and Norris Cole (Malcolm Hebden). Pictured on the second stamp in this pair are Hayley (Julie Hesmondhalgh) and Roy Cropper (David Neilson).

Iain MacLeod, the producer of Coronation Street, said: “In our historic 60th year, it is an honour to have the show immortalised in this fashion. Coronation Street has had many iconic double acts down the years. Indeed, it’s a defining feature of the show. I hope fans will agree that the ones we’ve chosen, after much heated debate, are among the best of the bunch. This fun idea is a great way to pay homage to the nation’s best loved soap and give lovers of Coronation Street a little smile when an envelope pops through their letterbox and they see their favourite characters looking up at them.”

The Chase designed the stamps and souvenir sheet. International Security Printers printed them by lithography.

The stamps in se-tenant pairs were produced in sheets of 60 (sold in panes of 30 at most postal outlets). These stamps measure 41 millimeters by 30mm each and are perforated gauge 14.5 by 14.

The two first-class stamps also were issued in a booklet. In addition to these two stamps, the booklet contains four first-class Queen Elizabeth II definitives.

Other products offered by Royal Mail in conjunction with the Coronation Street issue include postmarks, first-day covers, a presentation pack, and 13 postcards reproducing the designs of the stamps and the souvenir sheet.