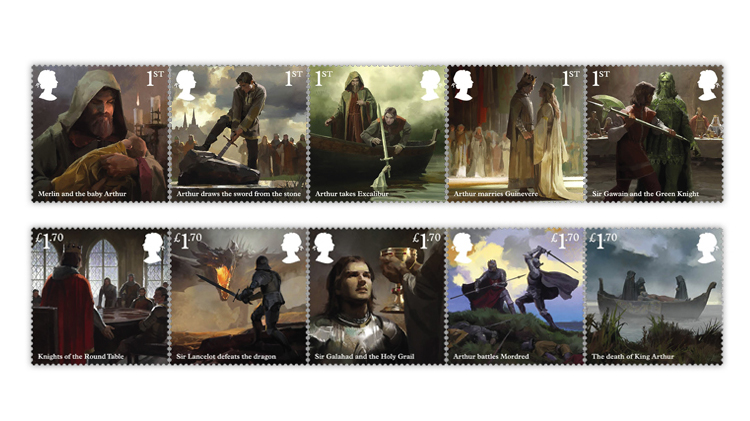 Great Britain’s Royal Mail issued 10 stamps March 16 showing illustrations by Jaime Jones of key scenes from the legend of King Arthur and his knights: Arthur’s birth, the sword in the stone, the Lady in the Lake and Excalibur, the wedding of Arthur and G

Royal Mail said: “The Legend of King Arthur is one of the most enduring stories of all time. Though his tale is rooted in the fifth and sixth centuries, it has captivated people for a millennium and a half, with its sword in the stone, knights of the round table and the wizard Merlin. At least 50 films and hundreds of novels have been produced about the story, which over centuries has come to symbolise part of British identity.”

The first written account of Arthur dates back to the ninth century. According to an article by Chantry Westwell on the website of the British Library: “The earliest written account of King Arthur as a historical figure is the Historia Brittonum (History of the Britons), a history of the British people. The history was assembled from a variety of sources in 829 or 830, by a cleric sometimes known as Nennius, probably under the patronage of the king of Gwynedd (r. 825–844).”

Later accounts, especially Geoffrey of Monmouth’s Historia Regum Britanniae (A History of the Kings of Britain) in the 12th century provided more details. Westwell said, “This work, together with his Vita Merlini (Life of Merlin) gives the first detailed account of Arthur’s education by Merlin, the sword in the stone, his death on Salisbury plain and his final resting place at Avalon.”

Since then, the tales of King Arthur and his famed knights have been told and retold through countless works of art, music, literature and more.

Royal Mail spokesman Philip Parker said: “These atmospheric illustrations bring to life the timeless stories of the King and the Knights of the Round Table. With its themes of magic, chivalry and quests, the enduring legend of King Arthur has entranced for centuries and will continue to do so.”

Each stamp bears an inscription briefly describing the illustration. For example, the first stamp is inscribed “Merlin and the baby Arthur.”

Royal Mail provided more information about this design, “Merlin holds baby Arthur, the future king, whose origins remain shrouded in mystery, and in Merlin’s power, until Arthur is revealed to be [King] Uther Pendragon’s rightful son and heir.”

The next two stamps feature the magical sword known as Excalibur.

One stamp shows a crowd watching while a teenage Arthur pulls the sword from the stone. Royal Mail said, “Arthur’s birthright to the crown of England, according to later romance traditions, is confirmed when he pulls out the sword in view of the Archbishop of Canterbury and the whole court.”

On the other stamp, “Arthur takes Excalibur,” the arm of the Lady of the Lake reaches out of the water to hand the sword to Arthur, who is in a boat with Merlin.

The fourth stamp in the strip depicts Arthur marrying Guinevere. According to many of the retellings of the Arthurian legend, Guinevere’s dowry was the Round Table.

One of the knights of the Round Table was Arthur’s nephew Sir Gawain. The final illustration in the strip depicts Gawain preparing to chop off the head of the Green Knight.

The only known surviving manuscript of the 14th-century poem Sir Gawain and the Green Knight is at the British Library. On its website, the library said: “The poem opens with a description of a Christmas feast at Camelot, the Arthurian court. During the feast a mysterious knight, with green hair and green skin, riding a green horse, arrives and challenges the assembled crowd to a bizarre game, which sets off a chain of events in which Gawain faces trials and temptations.”

A scene of Arthur with the Knights of the Round Table is illustrated on the first stamp in the £1.70 strip. Royal Mail said, “Around the Round Table, knights from Europe and all nations in the British Isles share the same values of loyalty and unite as equals to protect the weak and defend the realm.”

The second and third stamps in this strip illustrate legends associated with two of the knights: Sir Lancelot and his illegitimate son, Sir Galahad. Lancelot is slaying the dragon, and Galahad is receiving the Holy Grail.

Royal Mail said of the first scene: “Emblematic since Arthur Rackham’s illustrations dating from the early 20th century, Lancelot’s slaying of the dragon shows God’s grace granted to Lancelot in the fight with the Devil/darkness, despite Lancelot’s own sins.”

Of the second scene, Royal Mail said: “Sir Galahad, the pure knight, is the epitome of perfection among Round Table knights, and the opposite of his father, Lancelot. His unique success in the Grail Quest reveals the moral failures of Arthurian chivalry.”

The fourth stamp depicts Arthur engaged in battle with Mordred, who is described in some accounts as Arthur’s son and in others as his nephew. In this battle, Mordred mortally wounds Arthur.

Royal Mail describes the design of the last stamp, “The wounded Arthur departs for Avalon on a barge driven by three queens,” adding that this “represents hope for the king’s return, and the agency of women in healing and in preserving his memory and stories.”

International Security Printers printed the stamps by lithography in sheets of 50 (sold in panes of 25 at most postal outlets). The stamps are square, 35 millimeters by 35mm, and are perforated gauge 14.5.

In conjunction with the Legend of King Arthur issue, Royal Mail also is offering postmarks, a first-day cover, 10 postcards reproducing the designs of the stamps, and a presentation pack. The pack includes the stamps, images by Jones and text by Raluca Radulescu, a professor of medieval literature and English Literature and a specialist in Arthurian legend.