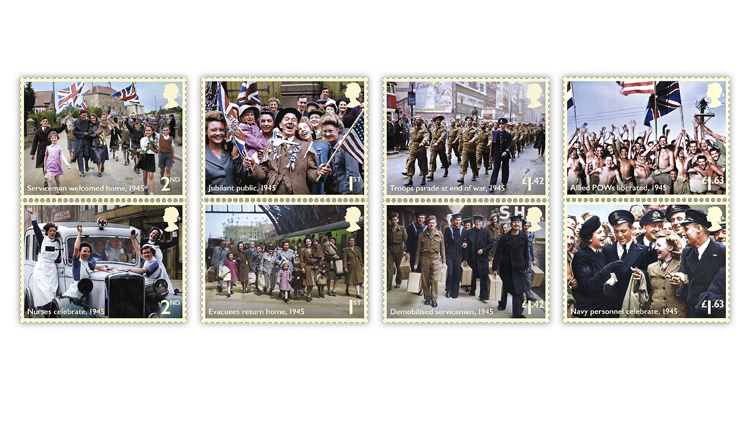 Great Britain’s Royal Mail is remembering the 75th anniversary of the end of World War II on a set of eight stamps and a souvenir sheet of four being issued May 8. The designs of the eight stamps are based on 1945 photographs of people celebrating the end 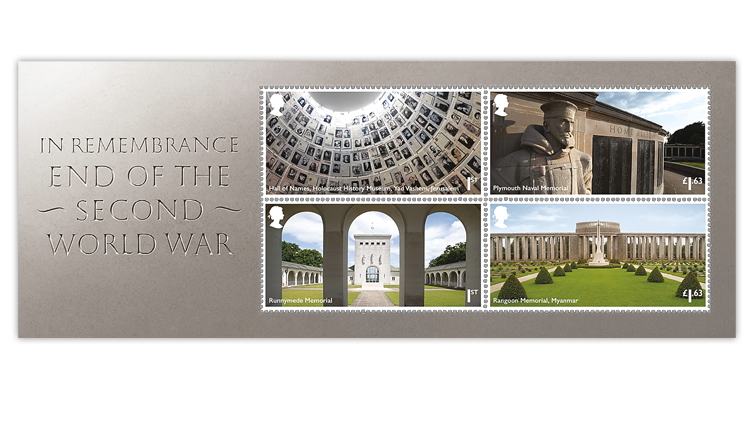 The souvenir sheet in Royal Mail’s the End of the Second World War issue depicts a holocaust memorial in Jerusalem, two war memorials in England and a war memorial in Myanmar.
Previous
Next

A set of 12 stamps from Great Britain’s Royal Mail commemorates the 75th anniversary of the end of World War II.

Royal Mail is issuing the stamps May 8, the 75th anniversary of Victory in Europe Day. Eight of the stamps are se-tenant (side-by-side) in four pairs, and the other four are se-tenant in a single souvenir sheet. A prestige booklet combines the stamps with text and images.

Royal Mail is calling this issue the End of the Second World War and said that it “reflects on the end of the war both in Europe and in the Far East, with three concepts: celebrating, returning and remembering.”

The concept of remembering is represented by the four memorials depicted on the stamps in the souvenir sheet.

The themes of celebrating and returning are illustrated on the stamps in the se-tenant pairs. Royal Mail described the designs as “featuring evocative photographs capturing the relief and jubilation that followed the formal conclusion of the conflict in 1945.” The original black-and-white photographs were colorized by Royston Leonard.

Another V-E Day celebration, this one in London’s Piccadilly, is captured on the photograph reproduced on a nondenominated first-day class stamp. The image includes two American flags, one being waved by the man in the center of the photograph and another one tucked in the breast pocket of his suit.

Pictured on the other first-class stamp are evacuees returning home by train to London in early June 1945 after staying in Leichester during the war.

In an article on the BBC’s website, David Priest wrote: “The evacuation of Britain’s cities at the start of World War Two was the biggest and most concentrated mass movement of people in Britain’s history. In the first four days of September 1939, nearly 3,000,000 people were transported from towns and cities in danger from enemy bombers to places of safety in the countryside.

“Most were schoolchildren, who had been labelled like pieces of luggage, separated from their parents and accompanied instead by a small army of guardians — 100,000 teachers.”

The pair of £1.42 stamps features two photos of servicemen.

In one photo, troops march through Oxford Street in London during a parade for the Victory Over Japan exhibition. The exhibition opened Aug. 21, 1945, and was visited by more than a million people before it closed four months later, according to the blog site of historian Christopher Knowles.

Victory Over Japan, or V-J Day, which marks the end of the war, is commemorated on different dates: Sept. 2 in the United States (on Sept. 2, 1945, Japan formally surrendered aboard the USS Missouri); and Aug. 15 in Great Britain (on Aug. 15, 1945, the surrender was announced).

The photo on the other £1.42 stamp pictures soldiers and sailors leave a demobilization center in 1945. They are carrying their civilian clothes in boxes, according to Royal Mail.

Celebration scenes are depicted on the two £1.63 stamps.

The first £1.63 stamp shows Allied prisoners of war at the Aomori (Omori Camp) near Yokohama, Japan, cheering their rescuers, the U.S. Navy, on Aug. 29, 1945. The POWs are waving flags of the United States, Great Britain and the Netherlands.

Royal Mail describes the second £1.63 as showing, “A member of the Women’s Royal Naval Service (WRENS) proposes a toast during VE Day celebrations in Glasgow.”

According to a BBC web-based project about WWII, the WRENs “reached its largest size in 1944, with 74,000 women doing over 200 different jobs. 303 Wrens were killed on wartime service.”

Starting in the upper left of the souvenir sheet, a first-class stamp shows Yad Vashem, the world Holocaust remembrance center, in Jerusalem. The £1.63 next to it depicts the Plymouth Naval Memorial in Devon, England.

A memorial to the air forces, the Runnymede Memorial, is pictured on the first-class stamp in the bottom row. The £1.63 stamp shows the Rangoon Memorial. Located in Taukkyan War Cemetery, this memorial honors the land forces of the British Empire who died during the campaigns in Burma, now known as Myanmar.

Inscribed in four lines in the selvage of the sheet, in letters that resemble carvings in stone, is “In Remembrance/End of the/Second/World War.”

Royal Mail describes the prestige booklet as a “24-page fact-packed publication includes detailed accounts of key moments, including the Battle of the Bulge and the defeat of Japan.”

The fourth stamp pane contains eight Queen Elizabeth II definitives (four 5 pence and two each 50p and £1.63) and a central label with a V for Victory design.

Hat-Trick Design designed the stamps and the souvenir sheet. International Security Printers printed them by lithography.

The stamps were produced in sheets of 60 (sold in panes of 30 at most postal outlets). Each stamp measures 41 millimeters by 30mm and is perforated gauge 14.5 by 14.

Royal Mail reports that it worked with experts and curators from the Imperial War Museums, the Commonwealth War Graves Commission, the National Maritime Museum, and the Association of Wrens in creating this issue. Professor Richard Overy of Exeter University and military historian Iain Ballantyne also were consulted.

Other products offered by Royal Mail in conjunction with the End of the Second World War issue include postmarks, first-day covers, a presentation pack, and 13 postcards reproducing the designs of the stamps and the souvenir sheet.