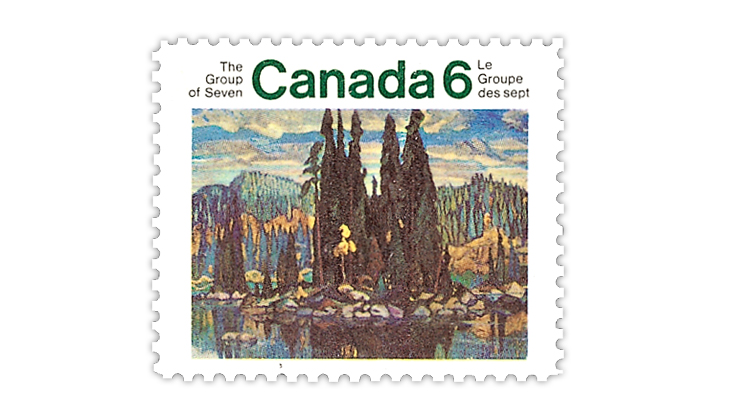 Canada Post will commemorate the 100th anniversary of the Group of Seven, a group of landscape artists formed in 1920, on seven stamps to be issued in 2020. A 6¢ stamp issued in 1970 marked the group’s 50th anniversary.

Canada Post will commemorate the 75th anniversary of the end of World War II in Europe, medical groundbreakers, artists and more on stamps to be issued in 2020.

In a Sept. 10 press release, Canada Post said, “The stories behind some of Canada’s most historic moments, awe-inspiring achievements, artistic icons and medical visionaries will come to life in the 2020 stamp program.”

The press release announces seven sets of commemorative stamps planned for 2020, but it does not mention issue dates or specific design details about the stamps.

The end of WWII in Europe, known as Victory in Europe or V-E Day, was celebrated May 8, 1945, following the German surrender to the Allies. Canada Post’s stamps for the 75th anniversary will honor “Canadians who contributed to the Allied victory.”

Among the artists to be commemorated on Canada’s stamps in 2020 is Mary Riter Hamilton (circa 1867-1954). Shortly after the end of WWI in 1919, Hamilton was commissioned by Amputation Club of British Columbia to travel to Europe to paint battlefield landscapes.

The Canadian Encyclopedia website said, “She produced over 350 works in three years, which are a document of the destruction and devastation caused by the war.”

Canada Post describes the Hamilton stamp as featuring an “evocative work” by the WWI artist.

A set of seven stamps will highlight notable works by the Group of Seven and commemorate the 100th anniversary of the formation of this group of landscape artists in 1920.

In 1970, Canada Post issued a 6¢ stamp for the 50th anniversary of the Group of Seven. In addition, several other Canadian stamps have featured the paintings of Group of Seven artists: Franklin Carmichael, Lawren Harris, A.Y. Jackson, Frank Johnston, Arthur Lismer, J.E.H. MacDonald and Frederick Varley.

The 2020 program also will include a set of stamps displaying vintage travel posters with the themes of “promising sunny skies,” “memorable sights” and “fascinating adventures.”

A set of five stamps, which Canada Post calls Medical Groundbreakers, will honor the “life-saving contributions of some of Canada’s most respected health care researchers.”

The set named Canada’s First Nations, Inuit and Metis will portray the history, culture and contributions of these indigenous peoples.

Rounding out the 2020 commemorative stamps will be a tribute to two legends of Canadian ballet, and a single stamp or a set illustrating the history of radio in Canada.

As for Canada Post’s stamp series, dahlias have been picked for the Flowers stamps; and images of Carcajou Falls in the Northwest Territories, the village of French River on Prince Edward Island, and Kootenay National Park in British Columbia will appear on stamps in the From Far and Wide series. The national park will celebrate its 100th anniversary in 2020.

The Black History Month series also will continue, but Canada Post said that “the long-running Lunar New Year series will reach the tail end with the Year of the Rat.”

Rounding out the program will be a new Canada Post Community Foundation semipostal stamp issue supporting Canadian children and youth; and holiday issues for Christmas, Hanukkah, Eid and Diwali.

Canada Post added that the religious-themed Christmas stamps will show traditional scenes of the Nativity and the secular-themed stamps will feature folk art by Maud Lewis (1903-70).