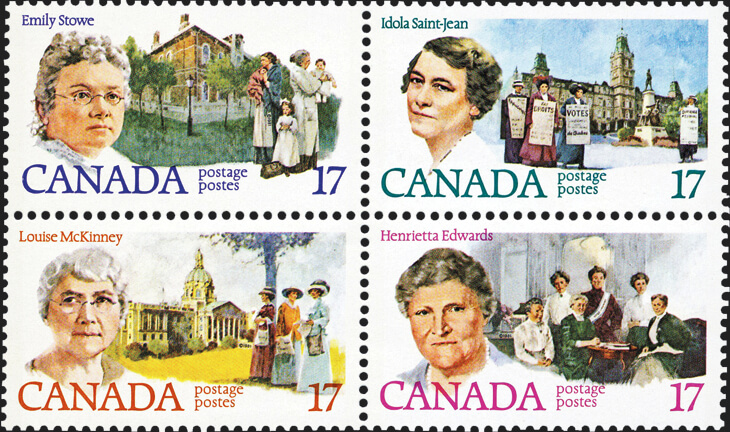 Issued March 4, 1981, this block of four se-tenant 17¢ Women of Achievement stamps (Scott 879-822) commemorates four women who played important roles on the road to suffrage for women and respect for their greater roles in Canadian public life: physician 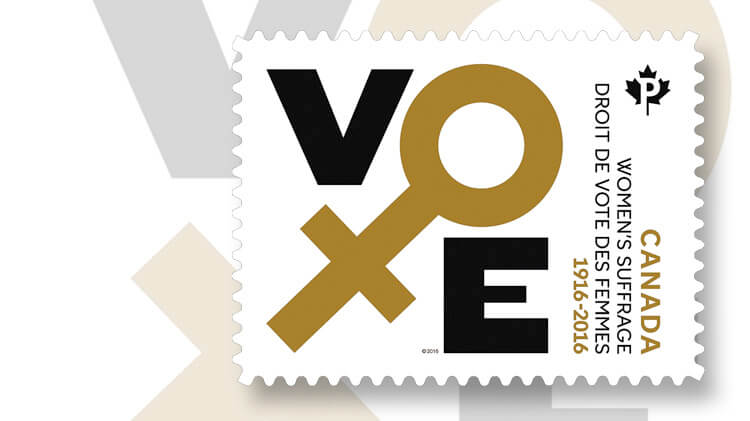 Canada Post issued this nondenominated permanent-rate stamp March 8 to commemorate the 100th anniversary of women’s right to vote in Canada. 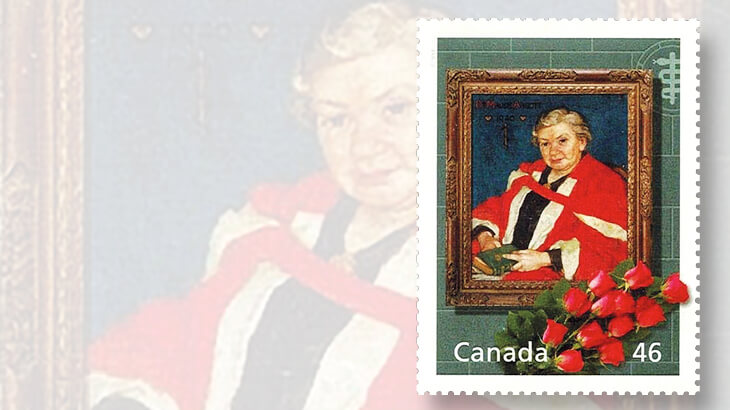 Issued in 2000, this 46¢ Medical Innovators Millennium commemorative for Maude Abbott (Scott 1822d) pays tribute to a woman snubbed when she applied to McGill University Medical School in the 1890s, who got her medical degree elsewhere and returned to mak 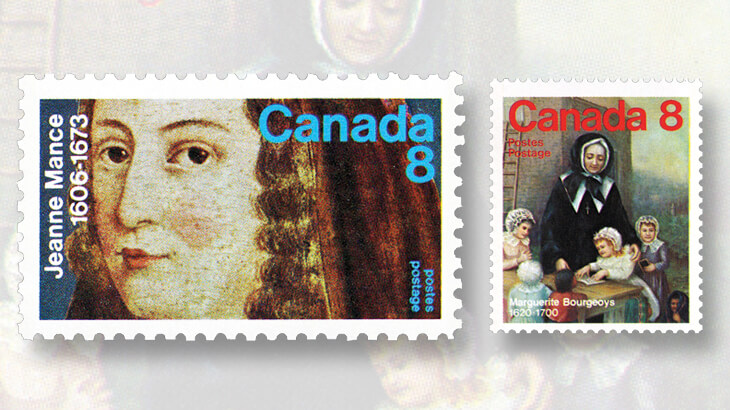 Two 8¢ stamps from Canada honor Jeanne Mance (Scott 615) and Marguerite Bourgeoys (660), who were among the first French immigrants to what would one day be Quebec. The two women worked to bring medical care, educational opportunity, and the word of God t 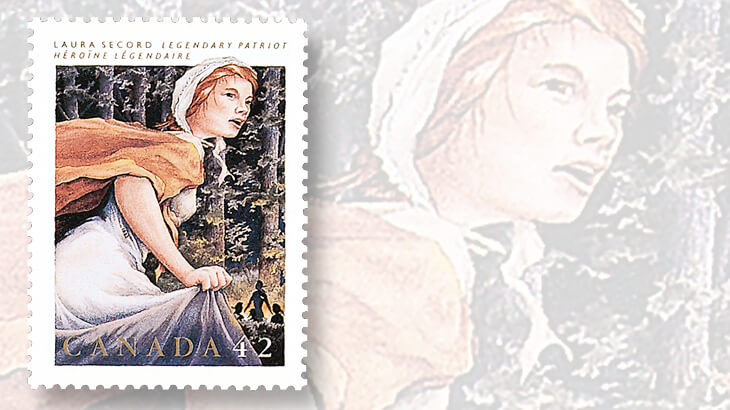 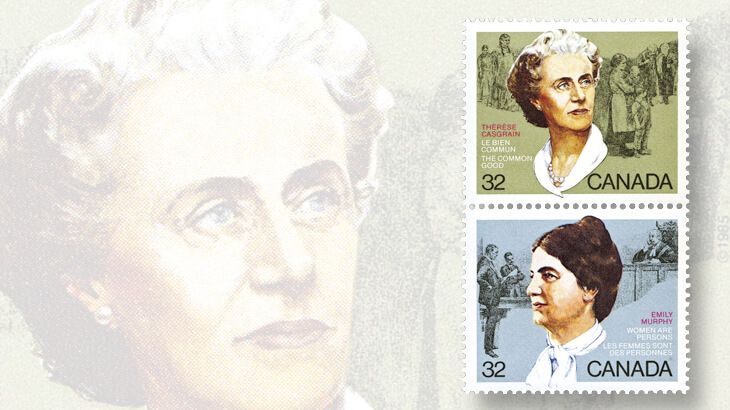 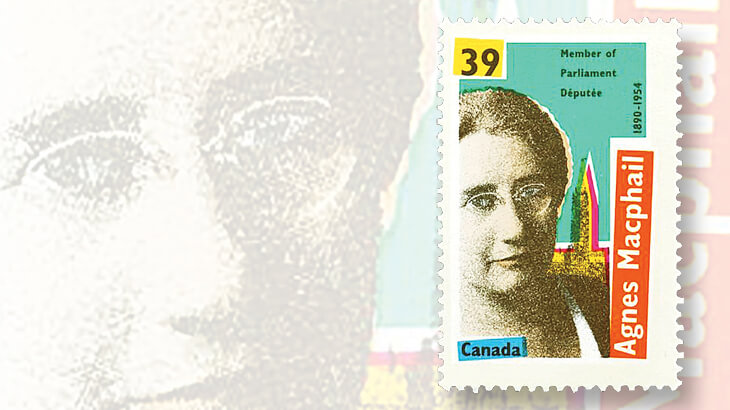 This 1990 39¢ commemorative stamp salutes the 100th birthday of Agnes Macphail (Scott 1293), who in 1921 became the first woman elected to the Canadian House of Commons, and in 1943 one of the first two women elected to the Ontario legislature.
Previous
Next

Before women’s suffrage became national in Canada, it was provincial, beginning Jan. 28, 1916, when the women of Manitoba received both the right to vote for and the right to hold provincial office.

The new stamp was issued in Winnipeg, Manitoba’s capital, with its simple message “VOTE” in black and gold, using the ages-old Venus/Aphrodite symbol for womanhood to form the “O” and “T.” It’s a striking and a clever design, but for me, it lacks a human touch.

Who were the women who paved the way for the rest? What are their stories?

Two of the earliest of these women were honored on 8¢ stamps issued by Canada in 1973 and 1975, respectively.

Born in France in 1606, Jeanne Mance, pictured on a 1973 commemorative (Scott 615), is chiefly celebrated as the first secular (not a member of a religious order) nurse in Canada, a claim that far underrates her importance and misrepresents her service to six generations of fellow settlers.

As the Archives of Canada puts it, she fully deserves to be recognized as the cofounder of Montreal and one of its most important early benefactors. The hospital she founded and generously endowed, Hotel-Dieu de Montreal, cared for 200,000 patients in the 150 years from 1760 to 1910.

The Scott Standard Postage Stamp Catalogue lists a scarce error of the stamp printed on the gummed side of the paper (Scott 615a), valued in italics at $800.

A 1975 stamp salutes Marguerite Bourgeoys (Scott 660), another French-born settler and founder of the Congregation of Notre Dame of Montreal, where she moved in 1653, educating young girls, the destitute, and native Canadians until her death in 1700.

She eschewed the cloistered life, then the norm for most women in the Catholic Church, in favor of living and working alongside her fellow settlers, the better to serve them, teach them, and spread the word of God. A great success, she was canonized as a Catholic saint in 1982.

A se-tenant block of four 17¢ stamps recognizing women of achievement was issued in 1981 (Scott 879-882). Each stamp pictures  a woman against a background associated with her accomplishments. All four of these women played roles — directly, inspirationally, or both — in nurturing the woman’s rights movement in Canada.

Emily Stowe (Scott 879), born in 1831, was Canada’s first practicing female doctor, an activist and founder of the Canadian suffragist movement, and a campaigner for a Canadian medical college for women.

Rudely barred from the Toronto School of Medicine in 1865, she earned her degree at the homeopathic New York Medical College for Women in 1867, and successfully practiced in Toronto. It was while in New York that she met Susan B. Anthony and went on to become a founding member in 1889 and first president of Canada’s Dominion Women’s Enfranchisement Association.

In 1991, Canada issued a 40¢ stamp for Jennie K. Trout (Scott 1302), the first Canadian woman to become a medical doctor legally, and the only woman in Canada licensed to practice medicine until 1880, when Stowe completed her official qualifications.

McKinney stood for temperance, stronger liquor control, women’s property rights, and the Dower Act that would allow a married woman legal rights to one-third of her husband’s property.

Montreal-born Idola Saint-Jean (Scott 881), a journalist, educator, and feminist, devoted her life to the pursuit of equal rights for women in Quebec. In 1927, she founded the Canadian Alliance for the Vote for Women in Quebec, and was one of a group who met with the Quebec premier to demand suffrage for women, returning before the Quebec National Assembly each year until 1940, when women finally won the right to vote.

Canadian women’s rights activist and reformer Henrietta Edwards (Scott 882), raised in an upper middle-class family in Montreal, founded with her sister, Amelia, a Working Girls’ Association in 1875 to provide meals, reading rooms, and study classes. The two sisters also published the magazine The Working Women of Canada, which they paid for out of their own pocket.

Wife of a doctor who ministered to Indians on reservations in the prairies, in 1897 she helped establish Canada’s Victorian Order of Nurses.

In 1985, a se-tenant 32¢ pair (Scott 1047-1048) honored two other influential women from the same generation. Following in the footsteps of Idola Saint-Jean, fellow Montrealer Therese Casgrain (Scott 1047) followed her work in Quebec’s women’s suffrage movement with leadership of the League for Women’s Rights (1928-42).

After World War II, she joined the Co-operative Commonwealth Federation. Her leadership of the Quebec wing of that social-democratic political party in 1951-57 made her the first Canadian woman to head a political party. Prime Minister Pierre Trudeau appointed her to the Canadian senate in 1970.

Born in a small town on Lake Simcoe, Ontario, Emily Murphy (Scott 1048) was a women’s activist, jurist, and author who in 1916 became the first female magistrate in the British Empire.

Most memorable, however, was her role in confronting the question of whether or not women in Canada counted as persons under the law and the political system.

Murphy was one of Canada’s “Famous Five,” a group of activists that included stamp honorees Henrietta Edwards,  Louise McKinney, and Nellie McClung (Scott 622), along with women’s farm leader, activist, and politician Irene Parlby, the only member of the quintet who has yet to be honored postally.

In 1927, these women launched the Persons Case (the common name for Edwards v. Canada), eloquently contending that women should be eligible to sit in the Senate. The Supreme Court of Canada ruled that they were not. However, upon appeal to the judicial committee of the British Privy Council, then the highest court for the Dominion of Canada, the women won their case.

Hailed with a 39¢ stamp to mark the centennial of her birth in 1990, Agnes Macphail (Scott 1293) in 1921 became the first woman elected to the Canadian House of Commons, and was one of the first two women elected to the Ontario legislature in 1943.

Concluding the old century and reminding us of the progress made during it was a 46¢ Medical Innovators stamp for Maude Abbott (Scott 1822d). This stamp, issued Jan. 17, 2000, as part of the Millennium series, shows a framed portrait in her McGill University finery, holding an early medical reference in her lap, with a bouquet of roses in the foreground and on the wall a stylized rod of Asclepius, the symbol of medicine and healthcare.

Abbott received a scholarship in 1885 to McGill University, where she won high honors and an arts degree, but she yearned to study medicine. Barred from that at McGill, she was accepted at the medical school of Bishop’s College in Lennoxville, Quebec, graduating with honors as the only woman in her class in 1894, then studying three additional years in Europe.

Subsequent success in her practice in Montreal and brilliant research in congenital heart disease won her the acclaim she sought, and in 1900 she was named curator of the McGill Museum of Medicine, a position she held until she retired in 1936.

Abbott organized the museum’s extensive collections, founded the International Association of Medical Museums, and introduced the museum as a learning tool at McGill.

I couldn’t close this column without a mention of Canada’s well-known military heroine, Laura Secord, whose likeness graces both a 1992 42¢ stamp (Scott 1434) in a block of four with other legendary Canadian heroes and a 2013 permanent-rate (63¢) commemorative in the Heroic Figures of the War of 1812 se-tenant pair (Scott 2651a).

Just as the United States has issued stamps for Molly Pitcher and Sibyl Ludington, so has Canada honored Secord for her 20-mile night-time jaunt — through fields, woods, and swamp — out of occupied territory to warn British troops about the American raid-in-force that she apparently heard about among the chit-chat of U.S. troops billeted in her home.

This enabled the British and their much-feared Mohawk allies to surprise, overwhelm, and capture a much larger American force at the Battle of Beaver Dams on June 24, 1813.

It’s true that the first of the Secord stamps (Scott 1434) was in fact sponsored by Laura Secord Inc., manufacturer since 1913 of fine chocolates.

Kindly refrain from jeering unless you think that the wife of President Madison, another woman who played a historic role in the War of 1812, always wanted a snack cake named after her.

For thumbnail stamp images and capsule biographies of 60 famous Canadian women celebrated on stamps from 1961 to 2011, visit the Stamp Echo blog of Arpin Philately.

More articles for the collector of Canada: