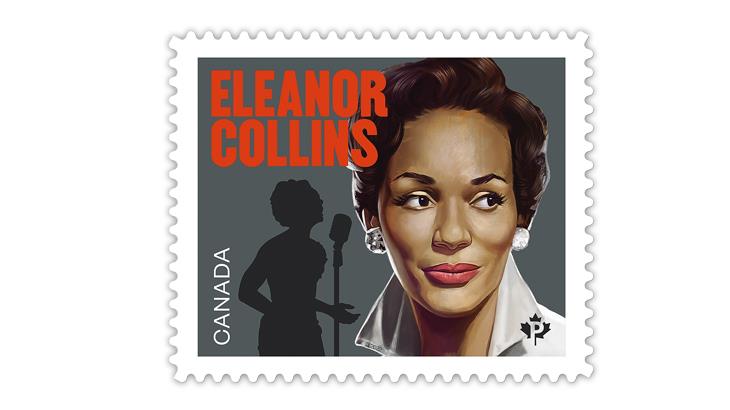 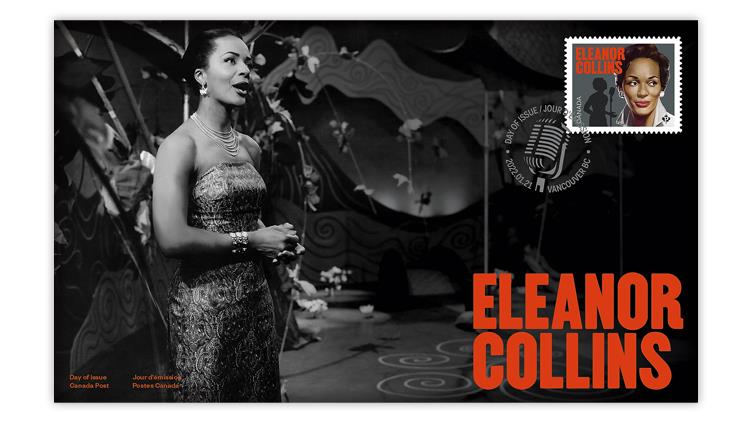 Canada Post’s first-day cover for the Eleanor Collins stamp was canceled in Vancouver, British Columbia, where she lived and worked for most of her life. The photograph on the front was taken in 1955.
Previous
Next

A living legend at 102 and Canada’s “first lady of jazz,” Eleanor Collins was honored on a postage stamp issued Jan. 21 by Canada Post. It is the latest stamp in Canada’s long-running Black Heritage Month series, which began in 2009.

In addition to being known “for her mesmerizing vocals and sophisticated style,” according to Canada Post, Collins was also a television pioneer.

Canada Post said: “Collins was a trailblazer — becoming the first female Canadian jazz artist (and one of the first Black performers in North America) to host a national television series, The Eleanor Show, in 1955. She hosted a second namesake TV series — Eleanor — in 1964.”

In a pre-recorded interview shown during that presentation, Collins answered the question of how she felt about being on a postage stamp.

“I feel wonderful and honored,” she said. “You know at 102 years old, one doesn’t expect to even be remembered. But I am grateful — now that’s something that you can’t take away. The honor is there, the excitement even is there, but to really have someone affirm your work and life on a postage stamp. … There is only one word for that, and that is surreal.”

Designed by Paprika, the stamp features an illustration by David Belliveau based on photographs by Franz Lindner. The photos are from the CBC Still Photo Collection.

The stamp shows two images of Collins: a portrait from a publicity photo on the right and a silhouette of her with a microphone on the left.

Her name appears in bold, orange letters in the upper left of the design. The “P” inside a maple leaf, representing that this is a permanent-rate stamp, is in the lower right on the collar of her blouse.

Lowe-Martin printed the stamp by five-color lithography in booklets of six. The quantity printed was 150,000 booklets. The stamp is 34 millimeters by 28mm.

The front of the booklet shows the portrait image from the stamp design, the inside includes another photo of Collins, and text on the back summarizes her career.

Collins was born Elnora Ruth Proctor on Nov. 21, 1919, in Edmonton, Alberta. Her parents were immigrants from Oklahoma who settled on the Canadian prairies, according to Canada’s national online encyclopedia.

Collins sang at home and in the Baptist church her family attended before being discovered after winning a local talent contest at age 15.

In the late 1930s, she moved to Vancouver, British Columbia.

Canada Post said, “In the 1940s, she was featured on CBC Radio with the gospel group Swing Low Quartet and, later, with Ray Norris in the jazz series Serenade in Rhythm. In the early 1950s, Collins appeared with other top musicians, such as Chris Gage, Phil Nimmons, Lance Harrison, Doug Parker, Fraser MacPherson, Don Thompson and Dave Robbins. Collins’ moving performances earned her the informal title of Canada’s first lady of jazz.”

She made her television debut in 1954 on the CBC variety series Bamboula: A Day in the West Indies, which aired in 1954.

“Collins appeared on numerous other television and radio shows through the 1950s, 1960s and 1970s,” according to Canada Post, “and made her last concert appearance in Vancouver when she was in her mid-90s. At 102 years old, Collins has received several lifetime achievement awards and in 2014 became a Member of the Order of Canada.”

Collins’ appointment to the Order of Canada was “for her pioneering achievements as a jazz vocalist, and for breaking down barriers and fostering race relations in the mid-20th century.”

She married Richard Collins in 1942, and they had four children. One of them, daughter Judith Maxie, was involved in the stamp’s creation, as was Eleanor Collins, according to Suromitra Sanatani, chair of the board of directors of Canada Post. Sanatani hosted the online unveiling of the stamp.

In addition to the stamp booklet, Canada Post is offering official first-day covers for the stamp. The cover is canceled with a silver microphone cancel from Vancouver.