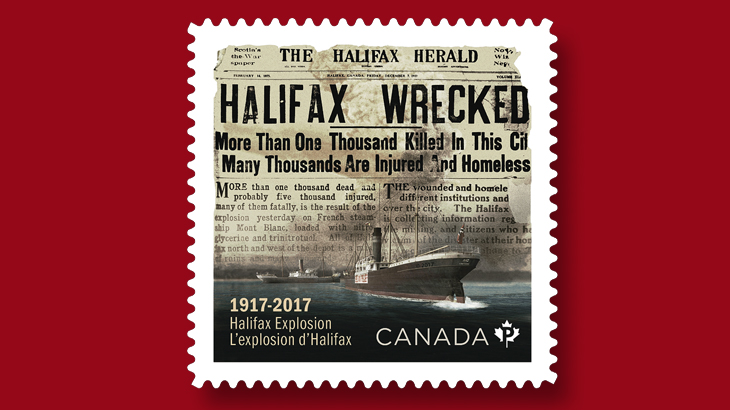 A new Canadian stamp remembers the devastation of the Halifax explosion a century ago (Dec. 6, 1917), overlapping a recreation of the two ships moments before the collision that caused the tragedy with the front-page of the Halifax Herald detailing the bl

Early on Nov. 6, Canada Post released a stamp that remembers the devastating explosion that rocked the Nova Scotia port of Halifax at 9:04 a.m. on Dec. 6, 1917, when two ships – one loaded with explosives – collided in the narrows leading to the inner harbor of the busy wartime port. Issued a month before the centennial, “the issue also salutes the resilience of the Haligonians who rebuilt their city from the ashes” according to Canada Post.

“With this stamp, Canada Post remembers those whose lives were lost or forever changed in this terrible incident,” said Canada Post President and CEO Deepak Chopra. “We also pay tribute to the residents of Halifax, other Canadians and people from around the world who helped those affected and contributed to the recovery effort.”

According to a report by Elizabeth McMillan on CBC News/Radio One/Halifax, Canada Post commissioned the Halifax marketing firm Burke & Burke to create the stamp in 2015.

Because there are few images of the ill-fated vessels before the accident, Halifax illustrator Mike Little recreated the central scene on the stamp scene based on historic accounts and materials. It captures the momentous scene seconds before disaster became inevitable, when the Norwegian ship Imo carrying relief supplies for Belgium, collided with the French munitions transport Mont-Blanc, packed with 2,622 tons of explosives bound for the Western Front, as the two ships passed through the narrowest part of Halifax harbor. The 2½-kiloton blast was largest human-made explosion prior to the detonation of the first atomic bomb.

This image of the ships is superimposed onto the front page of The Halifax Herald from the day after the explosion, detailing the horrendous aftermath that resulted from the blast.

It was years before an accurate count would be made, but the Halifax Explosion killed an estimated 2,000; maimed or blinded 9,000 more; and left more than 25,000 without shelter.

The die-cut self-adhesive 32-millimeter by 32mm stamp designed by Larry Burke and Anna Stredulinsky of Burke & Burke is a permanent stamp paying the domestic letter rate (currently 85¢). It is available in 10-stamp booklets (Canada Post order no. 414068111).

Canada Post’s somber first-day cover for the stamp shows the ruined superstructure of the relief ship Imo, which escaped the annihilation that destroyed Mont-Blanc, but was hurled onto the shore. Rendered in gold, the face of a clock records the exact moment the two ships collided on the Halifax first-day cancel. While the stock of 9,000 lasts, FDC is available for $1.85 (Canada Post order no. 414068131).