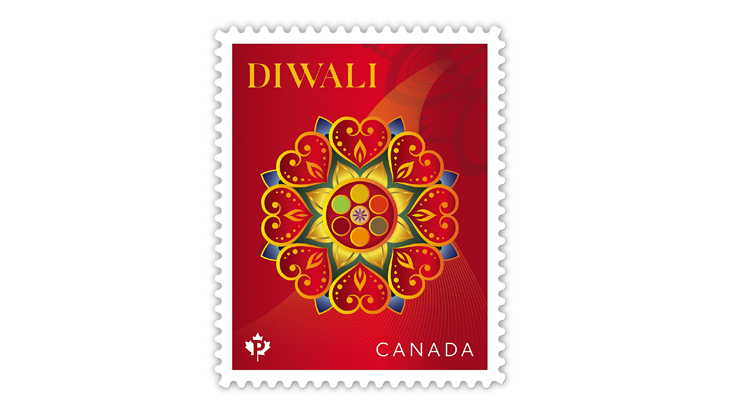 Canada Post issued this permanent-rate Diwali stamp Oct. 19 in a booklet pane of 10. The design is based on symbolic rangoli art patterns.

Canada Post issued a new stamp Oct. 19 for the holiday of Diwali. Also known as the Festival of Lights, it is a celebration of good over evil.

In its Oct. 19 press release, Canada Post described it as “one of the largest and most widely celebrated festivals in India. Observed by Hindus, Buddhists, Jains, Sikhs and others around the world, the five-day celebration falls on November 4 this year.”

Like most recent Canadian stamps, all of the Diwali stamps are permanent-rate stamps paying the basic domestic letter rate (currently 92¢).

“Rangolis are an important part of the celebrations,” Canada Post said in the October issue of Details, its publication for collectors. “Drawn on floors in entranceways, living rooms and courtyards using flower petals, coloured sand and other materials, these temporary works of art are traditionally created to invite Lakshmi, the goddess of good fortune, into celebrants’ homes.”

The artwork in the center of the stamp includes lotus flowers, one in blue on the outside and another in yellow in the center. These flowers symbolize new beginnings, according to Canada Post.

Depicted inside the yellow lotus flower is an Indian spice box called a masala dabba. Canada Post said that this box alludes to the food that is shared during the festival.

The ring of heart-shaped oil lamps in the design represents love and gratitude, Canada Post said. These lamps are called diyas, and the name Diwali comes from the Sanskrit word that means “row of lights.”

In Details, Canada mentioned two other symbolic elements on the stamp: “The rich golds in the design evoke a sense of wealth, while the stream of light in the background represents the gods illuminating the path to peace and prosperity.”

The same basic rangoli-based design is shown on a red background on Canada Post’s official first-day cover for the stamp. The first-day cancel, which shows a heart-shaped diya, is from Vancouver, British Columbia.

Lowe-Martin printed the stamp by six-color offset lithography in 80,000 booklets of 10. The stamp is 28 millimeters by 35mm.