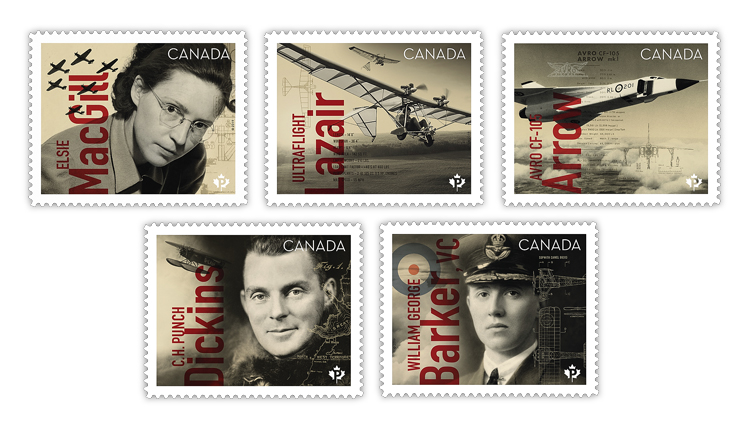 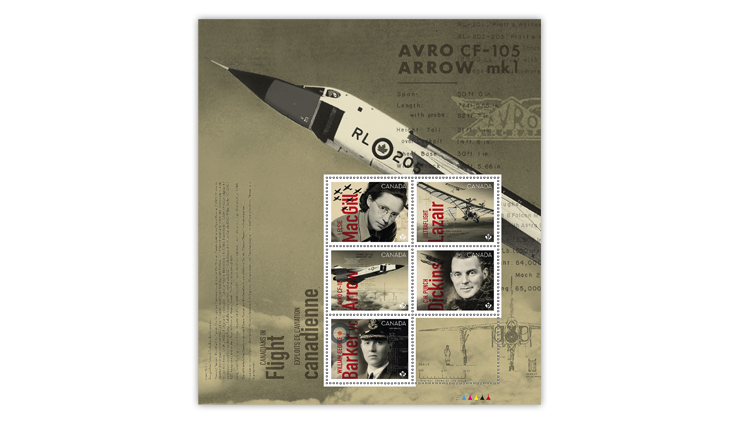 The Canadians in Flight stamps were issued in booklets of 10 and in a pane of five (shown).
Previous
Next

Issued March 27, the stamps are nondenominated, paying the basic domestic letter rate (currently 90¢). Canada Post calls these permanent stamps, and they are identified with the letter “P” inside a symbolic maple leaf.

In announcing the stamps, Canada Post’s new president and CEO Doug Ettinger said, “As Canada’s storyteller, Canada Post is proud to share these stories of personal bravery and ingenuity, and to commemorate the aircraft that demonstrate Canadian technological innovation.”

Among the three people pictured on the stamps is Elizabeth “Elsie” MacGill (1905-80).

MacGill was inducted into Canada’s aviation hall of fame in 1983 and into the pioneer hall of fame of Woman in Aviation International in 2012.

“Early in World War II, Elsie was appointed Chief Aeronautical Engineer for the Canadian Car and Foundry Plant in Fort William, Ontario, where the Hawker Hurricanes were built for the Allied forces overseas. Elsie promoted mass production techniques for the aviation industry, modified the Hurricane for winter use, and established standards for test pilot reporting.”

A 1942 comic book about her accomplishments called her “Queen of the Hurricanes.”

Like MacGill, Dickins is a member of Canada’s aviation hall of fame, inducted in 1974. His induction citation reads: “Despite adversity, he demonstrated to the world the value of the bush plane, and his total contribution to the brilliance of Canada’s air age can be measured not only by the regard in which he is held by his peers, but by the nation as a whole.”

In 1928, Dickins flew the first scheduled airmail flight from Winnipeg, Manitoba, to Edmonton, Alberta, and also received the Trans-Canada (McKee) trophy for his 4,000-mile flight over uncharted land in the Northwest Territories.

His bush plane for that flight, a Fokker Super Universal, is pictured on a 60¢ Canadian stamp issued in 1982 (Scott 972).

In all, Dickins logged more than 1 million miles flying across northern Canada.

Canada’s most decorated war hero, William George Barker (1894-1930), also is honored on a stamp in the Canadians in Flight issue.

In its Details publication for collectors, Canada Post said of the WWI fighter pilot: “For his wartime deeds and bravery, including 50 aerial victories in more than 900 hours of combat, Barker received the Distinguished Service Order (twice), the Military Cross (three times), the Croix de Guerre and the Medaglia d’Argento al Valor Militare (twice). He was awarded the Victoria Cross for downing four German planes during his final fight over France in October 1918, despite being vastly outnumbered and falling in and out of consciousness from his wounds.”

Among other achievements, Barker was the first Canadian pilot to carry international mail, doing so in 1919 as part of a round-trip aerial race from Toronto, Ontario, to New York. He was inducted as a member of Canada’s aviation hall of fame in 1974.

The earliest of the two aircraft pictured on the new stamps is the Avro CF-105 Arrow developed and produced in Ontario between 1953-58.

This twin-engine, supersonic interceptor could fly at more than twice the speed of sound. “It is considered one of the greatest technological achievements in Canadian aviation history. Some of its innovative technologies are still in use today,” according to Canada Post.

The other aircraft, the ultralight Lazair, was designed by Dale Kramer of Port Colborne, Ontario, and manufactured as kits in Canada between 1979 and 1985.

Canada Post said that these twin-engine, high-wing ultralight monoplanes are still “considered one of the best light aircraft ever made.”

The Canadians in Flight stamps were developed with the support of the Canada Aviation and Space Museum.

They were designed by Ivan Novotny of Taylor|Sprules and printed by Lowe-Martin, using five-color lithography, as self-adhesives in booklets of 10 (two of each design) and with PVA gum in a pane of five with the five designs se-tenant. The stamps measure 40 millimeters by 32mm each.

Canada Post also produced five official first-day covers. Each cover bears a different first-day cancel related to the person or aircraft honored. For example, the FDC for the stamp honoring Dickins shows his plane and is canceled in his birthplace, Portage la Prairie, Manitoba.

The ordering number for the set of five FDCs is 414106131; the FDCs also are sold separately.

The new Canadians in Flights stamps and related items are available online from Canada Post at www.canadapost.ca/shop, and by mail order from Canada Post Customer Service, Box 90022, 2701 Riverside Drive, Ottawa, ON K1V 1J8 Canada; or by telephone from the United States or Canada at 800-565-4362, and from other countries at 902-863-6550.