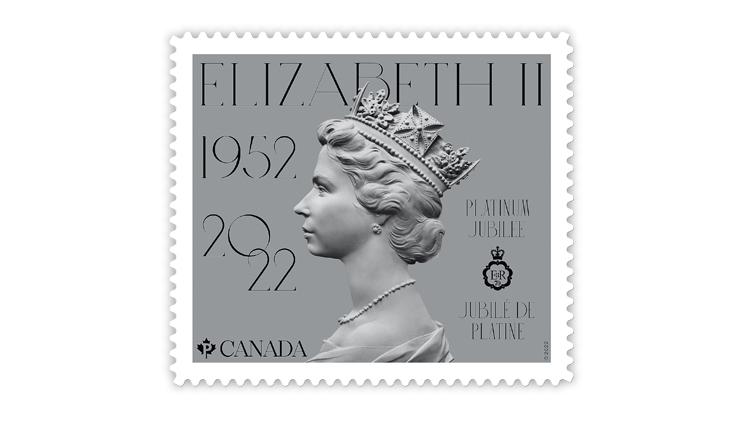 Canada Post issued a stamp Feb. 7 to commemorate the platinum jubilee of Queen Elizabeth II. The queen is the only sovereign of Great Britain and the Commonwealth to reign for 70 years.

On Feb. 7, Canada Post issued a stamp to commemorate the platinum jubilee of Queen Elizabeth II, the longest-reigning monarch of Great Britain and the Commonwealth. The platinum jubilee celebrates 70 years since the queen ascended to the throne on Feb. 6, 1952.

While the queen has appeared on more than 70 Canadian stamps, this is the first Canadian issue to feature Royal Mail’s profile of the queen sculpted by Arnold Machin. This profile has been used on Great Britain’s definitive stamps since 1967.

“Our iconic national stamp program has a long-standing tradition of commemorating The Queen’s reign and her connection to Canada,” said Doug Ettinger, president and CEO of Canada Post. “We are proud to continue that tradition by celebrating this historic 70-year anniversary with a new stamp, and the first of our stamps to feature the Royal Mail’s classic ‘Machin’ profile.”

The new nondenominated permanent-rate stamp is valued at the Canadian domestic rate (currently 92¢). The stamp was kept secret until it was unveiled on Sunday, Feb. 6, one day before it was issued.

In addition to the Machin profile of the queen, this Platinum Jubilee stamp shows a special Canadian jubilee emblem created by Cathy Bursey-Sabourin of the Canadian Heraldic Authority.

Text gives the queen’s name, the year dates marking her 70-year reign, and “platinum jubilee” in English and French.

Queen Elizabeth II first appeared on a Canadian stamp in 1935 as a part of a series celebrating the silver jubilee of her grandfather, King George V (Scott 211). The 1¢ stamp pictured then-Princess Elizabeth at age 9.

Canada issued a stamp featuring Princess Elizabeth and her sister, Princess Margaret (249), four years later as part of a set commemorating the first trip to Canada by King George VI and Queen Elizabeth.

Canada Post also has featured the queen on stamps honoring historical events, such as the June 1, 1953, Coronation issue (Scott 330).

Other stamps mark royal visits, including the first visit of Princess Elizabeth and the Duke of Edinburgh in 1951 (Scott 315), and a 1967 visit to commemorate Canada’s centennial (471).

In 2015, when Elizabeth had reigned 63 years, Canada Post issued a stamp (2859) to celebrate her becoming the longest-reigning British monarch.

Designed by Paprika, the new Platinum Jubilee stamps were printed by Colour Innovations using two-color lithography. Self-adhesive stamps are available in booklets of 10, and stamps with moisture-activated gum in panes of 16 and four corner blocks of four.

Canada Post’s official first-day cover was canceled in Ottawa, Ontario. The cancel uses the same Canadian emblem as the stamp.