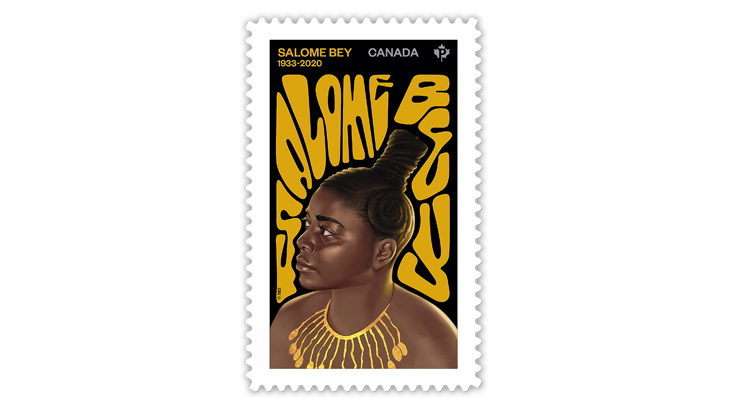 On April 22, Canada Post celebrated the life and work of Salome Bey with a nondenominated permanent-rate stamp. Bey, a Grammy-nominated singer-songwriter, was also involved in theater as a performer, writer and director.

“Bey was an award-winning singer-songwriter, composer, producer, director and actor, who was also widely revered for how she mentored young artists,” Canada Post said.

Bey was born in Newark, N.J., in 1933. During the 1950s, she toured North America and Europe with her brother and sister in a group called Andy Bey and the Bey Sisters.

Salome Bey made Canada her home after meeting her future husband, Howard Matthews, in Toronto, Ontario, in the 1960s, according to Canada Post. She passed away Aug. 8, 2020, in Toronto.

In a press release, Canada Post called Bey’s talents multifaceted. She sang blues, jazz and pop music as part of her solo career. In addition to releasing several solo albums, she appeared on recordings with pianist Horace Silver and composer/pianist Galt MacDermot.

Bey wrote, directed or appeared in a number of musicals, sometimes directing or starring in them. Writing her own songs and musicals “allowed her to provide more opportunities to Black performers,” according to Canada Post.

For her performance in the off-Broadway Love Me, Love My Children (called Justine in Canada), Bey earned an Obie award in 1972. Her performance in Broadway’s Your Arms Too Short to Box with God led to her and the other performers receiving a Grammy nomination for the original cast recording.

Bey wrote and starred in Indigo, a cabaret show celebrating the history of black music, for which she earned two Dora Mavor Moore awards. The show ran from 1978 to 1980, and a television adaptation aired in 1984.

In 1985, Bey participated with other Canadian artists in the charity single Tears Are Not Enough to raise funds for famine relief in Ethiopia. In 1986, she was a key organizer and songwriter for the Toronto Arts Against Apartheid Festival. The festival, held to protest apartheid in South Africa and raise funds for Toronto charities, was attended by Desmond Tutu.