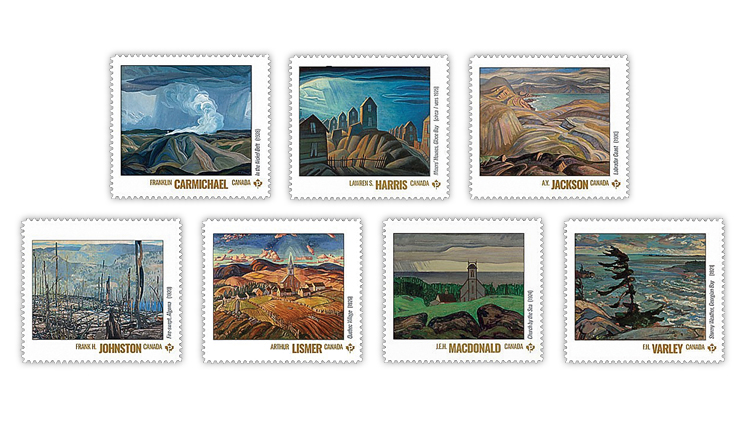 Canada Post is issuing seven stamps May 7 honoring the 100th anniversary of the first art exhibition of the landscape painters who called themselves the Group of Seven. Each stamp depicts a painting by one of the artists: Franklin Carmichael, Lawren S. Ha

New stamps from Canada Post commemorate the 100th anniversary of the Group of Seven’s first art exhibition. The stamps are being issued on the May 7 anniversary date of that exhibition held in 1920 in Toronto, Ontario.

These seven nondenominated permanent rate (currently 92¢) stamps feature paintings by the seven founding members of this group of landscape artists.

The stamps were unveiled online May 6 in partnership with six art galleries across the country.

In announcing the stamps, Canada Post said: “It was on May 7, 1920, that Canadian artists Franklin Carmichael, Lawren S. Harris, A.Y. Jackson, Frank H. Johnston, Arthur Lismer, J.E.H. MacDonald and F.H. Varley held their first exhibition as the Group of Seven at the Art Gallery of Toronto (now the Art Gallery of Ontario [AGO]). Inspired by Tom Thomson — who had drowned three years earlier — and encouraged by their shared creative vision, the Group changed the way Canada was viewed at home and abroad. Their raw and daring depictions of the landscape gave birth to a unique Canadian aesthetic that influenced generations of artists.”

In addition to displaying a painting, each stamp includes the name of the artist at the bottom and the name and date of the painting reading up on the right side.

Lowe-Martin printed the stamps as self-adhesives in a booklet and with traditional stamp gum in a souvenir sheet with all seven stamps.

Canada Post created seven official first-day covers, one for each stamp in the set.

Each FDC shows a black-and-white photograph of the artist and is canceled in a location significant that artist.

The stamps and FDCs were designed by Lionel Gadoury, Andrew Conlon and Matthew Killin of Context Creative, using works from six major Canadian galleries and photographs from the McMichael Canadian Art Collection Archives.