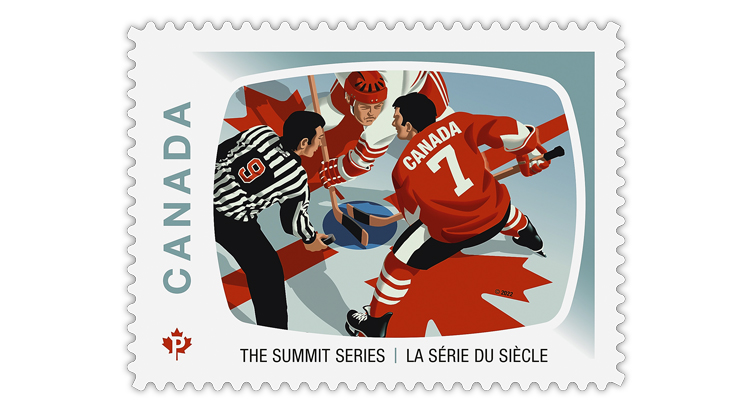 Canada Post issued a stamp Sept. 21 to commemorate the 50th anniversary of the Canada-USSR hockey series, now known as the Summit Series. It marked the first competition between the Soviet national team and a Canadian team with professional players.

On Sept. 21, Canada Post issued a stamp to commemorate the 50th anniversary of the 1972 Canada-USSR hockey series, now known as the Summit Series.

The eight-game series was played from Sept. 2–28, 1972, and marked the first competition between the Soviet national team and a Canadian team with professional players.

“The stamp is issued to inspire a sense of nostalgia and pride among Canadians who experienced the series and inform those who didn’t of a great moment in Canadian hockey history,” Canada Post said.

The nondenominated Summit Series stamp pays the permanent rate for domestic letters weighing up to 30 grams (currently 92¢). This is represented by the letter P inside a maple leaf in the lower left corner of the design.

According to Canada Post, the inspiration for the stamp design came from a face-off between Canada’s Phil Esposito and a Soviet player during the third game of the series on Sept. 6, 1972.

A frame reminiscent of a 1970s-era television contains the figures within the stamp design and recalls the experience of the millions who watched the games on television.

In its Sept. 21 press release about the new stamp, Canada Post said that Canadians “rode an emotional roller coaster” during the nearly month-long duration of the series.

Going into the eighth and final game of the series, both teams had won three games; the third game had ended in a tie.

Canada Post remarked on the significance of that last game for Canadians across the country: “On September 28, 1972, an estimated 13 to 15 million Canadians (out of 21 million) tuned in for that decisive game. They watched in their living rooms and panelled basement rec rooms. They watched in bars and Royal Canadian Legion Halls. They watched in factories and offices. They lined up shoulder to shoulder in front of televisions on sale in department stores. Schoolchildren watched on boxy TVs on stands wheeled into their gymnasium or classroom. Businesses closed to let employees watch.”

Those watching would not be left disappointed in terms of excitement. The Soviet team led 5-3 going into the third and final period, but Canada scored two goals to tie the game.

The game remained tied until the final seconds. “With a mere 34 seconds left in the game, Paul Henderson scored the series-winning goal. He later said, ‘When I saw it go in, I just went bonkers.’ So did the country,” Canada Post said.

The significance of this moment remains poignant. The September issue of Canada Post’s Details new-issue bulletin for stamp collectors poses the question: “Where were you on Thursday, September 28, 1972?” Roughly two-thirds of the Canadian public alive at the time would have a similar answer to that question.

The success of this series led to the creation of the Canadian Cup tournament, an international hockey tournament held five times between 1976 and 1991. It also led to a series of exhibition games, referred to as the Super Series, between Soviet and National Hockey League teams from 1976 to 1991.

In 2005, members of Canada’s 1972 Summit Series team were inducted into the Canadian Sports Hall of Fame.

Jim Ryce Design and Direction designed the Summit Series stamp using an illustration by Gary Alphonso. Lowe-Martin printed the stamp by lithography in five colors in a quantity of 300,000 booklets of 10.

The stamp measures 38 millimeters by 28mm.

Canada Post serviced 10,000 first-day covers for this stamp with a Winnepeg, Manitoba, cancellation dated Sept. 21. For a brief period on Sept. 21, Canada Post’s website mistakenly showed an FDC dated Sept. 6, the date the stamp originally was scheduled to be issued.

A video featuring prominent Canadians recalling their experiences with the series and its impact on the country is available through Canada Post.