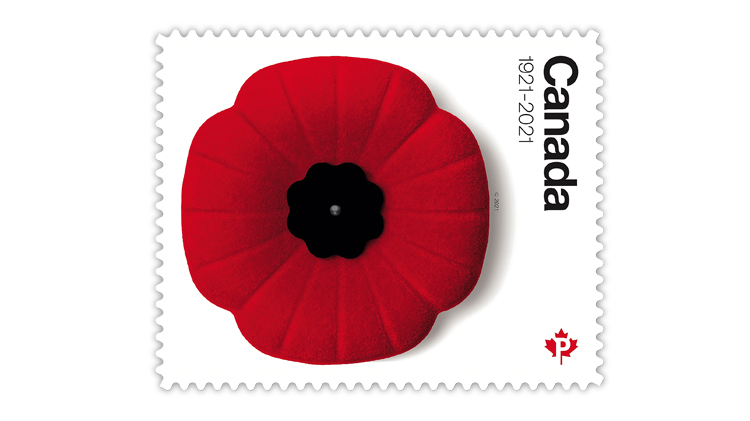 Canada Post issued a stamp Oct. 29 to commemorate 100 years of the poppy as a symbol of remembrance. The crimson poppy flower on a white background gives a clear representation of this common symbol. The small detail of the pinhead in the center of the re

On Oct. 29 Canada Post issued a stamp celebrating the 100th anniversary of the official adoption of the poppy as a symbol of remembrance in the country. The date had significance because each year the Royal Canadian Legion’s National Poppy Campaign begins on the last Friday of October. This release coincided with this year’s start of the campaign.

Striking in its simplicity, the stamp portrays a single red poppy flat against a white background. Subtle text in the upper right corner gives the range of years from the start of the poppy’s adoption to now.

The letter “P” inside the red maple leaf in the lower right indicates that it is a permanent-rate stamp paying the basic domestic letter rate (currently 92¢).

A press release from Canada Post explained that each year the legion raises close to $20 million through the Poppy Fund. The flowers are distributed freely, although the legion accepts donations. These donations help to provide financial assistance and other support for veterans and their families.

The press release further explained that poppies in the battlefields of France and Belgium during World War I inspired Lt. Col. John McCrae of Guelph, Ontario, to write the poem In Flanders Fields after losing a friend in the Second Battle of Ypres.

This poem started the trend that led to the Great War Veterans’ Association of Canada (the legion’s predecessor) adopting the poppy as a symbol of remembrance on July 6, 1921. Now, the annual campaign gives citizens a highly visible way to honor all those who have served.

Blair Thomson of the studio Believe In designed the stamp. According to Canada Post’s magazine for collectors, Details, Thomson is also an ardent philatelist. Colour Innovations printed a run of 250,000 by four-color lithography.

Special care was given in matching the red ink of the poppy on the stamp to the crimson of the natural flower. The inner parts of the flower are black. For the flower’s pinhead, metallic ink further provides a dark contrast to the red of the petals. Taken together, the two parts of the flower vividly appear against the white background of the stamp.

Thompson said of his stamp design in Details, “I envisioned packages and letters literally wearing their own poppy.”

“My approach is to strip away all that’s unnecessary, focusing on the purest form of visual clarity, and eliminating distraction,” he added.

“To me, simple, beautiful compositions have the greatest impact, are emotionally stimulating, and resonate longer in the mind.”