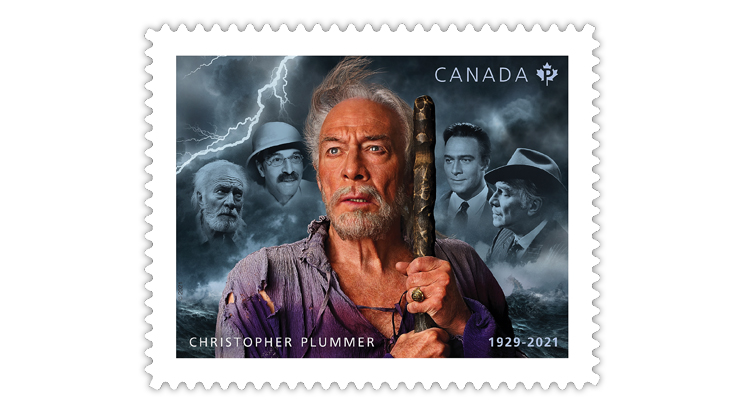 Canada Post issued a stamp Oct. 13 to commemorate Canadian actor Christopher Plummer (1929-2021). The stamp shows him in five of his roles for stage and screen, including as Captain von Trapp in the 1965 movie The Sound of Music.

Canada Post revealed the stamp design Oct. 13 and issued the stamp the same day in a booklet of 10 and a pane of six.

In the press release announcing the stamp, Canada Post said that when Plummer was approached with the idea in 2019, “he was thrilled at the prospect of being featured on a Canadian stamp, adding that “He was consulted in the process from the very beginning and personally approved the stamp design.”

In Details, Canada Post’s publication for collectors, Jim Phillips, director of stamp services, said, “We’re very glad that he was aware he was receiving this honour and able to be part of the process.”

Plummer also helped choose five roles representing his “much loved and celebrated” 70-year stage and film career to appear on the stamp, according to a blog post on Canada Post’s website.

Featured in color in the center of the design of the nondenominated, permanent-rate (currently 92¢) stamp is Plummer as Prospero in the 2010 stage production of Shakespeare’s The Tempest.

Plummer is shown in two film roles 10 years apart to the right and left of the image of Prospero.

Pictured to the right is his portrayal of Captain von Trapp in the 1965 film version of the Rodgers and Hammerstein musical The Sound of Music. The blog post article said, “His role in the 1965 movie brought him fame on the big screen, and a lifelong friendship with co-star Julie Andrews.”

On the left, Plummer is shown playing Rudyard Kipling in the 1975 adventure film The Man Who Would Be King, which also starred Sean Connery and Michael Caine.

On the far right of the design, the actor is depicted in his Tony Award-winning role as John Barrymore in the 1996 play Barrymore. He reprised this role in a 2011 Canadian film.

On the far left, Plummer stars in another Shakespearean play, the 2002 Stratford Festival of Canada production of King Lear.

Canada Post described the “moody, tempestuous background” of the stamp design as “symbolic of the drama he brought to the stage and screen.”

Completing the stamp design is Plummer’s name in the lower left, the years of his birth and death “1929-2021” in the lower right, and the country name and the “P” in maple leaf emblem (designating a permanent-rate stamp) in the upper right.

The stamp was designed by Stephen Slipp, using illustrations by Spooky Pooka.

Colour Innovations of North York, Ontario, printed the stamp by five-color lithography. The printing quantities were 200,000 booklets of 10 and 35,000 panes of six.

The cover of the booklet shows the design of the stamp, while the selvage of the pane of six features the lightning and stormy seas image from the background of the stamp.

A similar image is shown on the overall cachet on Canada Post’s first-day cover for the Christopher Plummer stamp. The first-day cancel shows Plummer’s signature and is from Toronto, Ontario, where Plummer was born on Dec. 13, 1929.

The text on the back of the cover summarizes Plummer’s career: “Toronto-born Christopher Plummer (1929-2021) was one of the world’s most distinguished and celebrated actors. Over his 70-year career, he appeared in hundreds of films, television movies and miniseries.

“Although his performance as Captain von Trapp in The Sound of Music brought him fame on the big screen in 1965, he was 80 before he received his first Academy Award nomination — as Tolstoy in The Last Station. His first Oscar, for his role in Beginners, made him, at 82, the Academy’s oldest winning supporting actor. Six years later, he became the oldest Academy-nominated actor for his performance as J. Paul Getty in All the Money in the World.

“On stage, Plummer’s magnetic presence was recognized in such classic roles as Hamlet, King Lear, Iago and Prospero, and earned him Tony Awards for his portrayals of Cyrano de Bergerac and John Barrymore.

“Among many honours, he was appointed a Companion of the Order of Canada.”