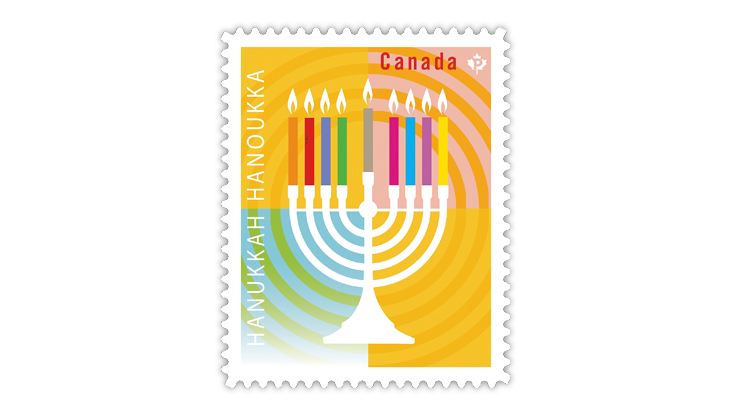 The wide variety of colors present in Canada Post’s new Hanukkah stamp contrasts well with the white of the menorah and flame, making the subject matter significant in its subtlety. The stamp was issued Nov. 8.

On Nov. 8 Canada Post issued a stamp for the 2021 Hanukkah season. This colorful stamp comes in self-adhesive booklets of 10.

The stamp design centers around a white menorah holding nine differently colored candles, each lit with a white flame. Concentric circles accentuate the curves of the menorah and connect the four background panes. Similar to the candles, each of the four panes is a different color.

The “P” inside a maple leaf representing the domestic letter mail permanent rate (currently 92¢) appears at the top right just above the menorah. “Hanukkah” is lettered along the left side in English and in French (as “Hanoukka”).

Canada Post also produced a first-day cover franked with a single Hanukkah stamp. The decorative envelope reproduces the same menorah image as the stamp design. Here the concentric circles emanate farther from the menorah, and text announcing the celebration of Hanukkah in English and in French follow the lines of the circles.

The Toronto, Ontario, pictorial first-day postmark on the FDC has outlines of three candle flames with text underneath.

The lighting of the menorah commemorates the miracle of a single day’s supply of oil lasting for eight days in the rededicated temple.

Details, Canada Post’s publication for stamp collectors, said that now the menorah “is usually placed in a window, so it can share its light with the world. Many families display several in their homes — some handed down from generation to generation or crafted by children at school.”

The Hanukkah stamp measures 28 millimeters by 35mm and was printed in a quantity of 80,000 in booklets of 10. A total of 4,500 Hanukkah FDCs were produced. Joseph Gault and Avi Dunkelman did the design and illustration, and Lowe-Martin printed the stamps.

The new Hanukkah stamp and FDC are available from Canada Post’s website.