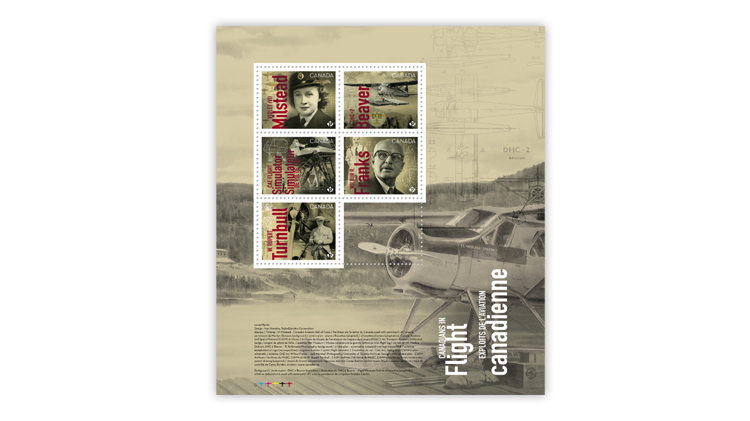 The Canadians in Flight stamps were issued in booklets of 10 and in a pane of five (shown).

Canada Post issued a set of Canadians in Flight stamps Oct. 17 in celebration of the people, planes and technologies that have led to the country’s innovations in aviation.

“Since the early days of flight, Canadians have made global advances in the fields of aviation and aeronautics, with some contributions remaining the foundation for ongoing advancement in these fields,” Canada Post said in its Details publication for collectors.

The nondenominated stamps pay the basic domestic letter rate (currently 92¢). Canada Post calls these permanent stamps, and they are identified with the letter “P” inside a symbolic maple leaf.

Among the three people pictured on the stamps is Wallace Rupert Turnbull (1870-1954).

Details called the variable pitch propeller his most notable achievement, and an Oct. 16, 2015, article posted on the website of Radio Canada International explained Turnbull’s role in producing the propeller in 1918.

The article noted that the angle of the variable pitch propeller could be increased to create more pull during takeoff and decreased to consume less fuel when cruising at lower power.

Later versions allowed for the now standard practice of enabling the pilot to change the pitch from the cockpit, the article said, and Details noted that Turnbull’s influence can still be seen in propeller-driven aircraft.

Another stamp in the set features an example of propeller-driven aircraft, the de Havilland Canada DHC-2 Beaver, which the Canadian Engineering Centennial Board named one of Canada’s top 10 engineering achievements of the 20th century.

Between the Beaver’s first flight in 1947 and the end of its production in 1968, the aircraft manufacturer de Havilland Canada built 1,692 models and delivered them to 62 different countries, Details said.

“With its short take-off and landing capability, flexibility to be fitted with wheels, floats or skis, and ability to carry up to nine passengers or bulk cargo, the Beaver is considered the best bush plane ever built,” Details said.

A third stamp in the set honors someone who Details called one of Canada’s first female pilots of these bush planes, Violet “Vi” Milstead (1919-2014).

Milstead earned her pilot’s license in 1939, followed by a commercial license, and by 1941 passed her flight instructor test to begin training military and civilian students to fly, according to an Oct. 28, 2014, article by Susanna McLeod in the Kingston Whig-Standard, a newspaper in Kingston, Ontario.

“During the Second World War, she joined Britain’s Air Transport Auxiliary,” Details said, “ferrying military aircraft — everything from single-engined fighters to large multi-engined bombers — between the factories and frontline squadrons.”

In the Kingston Whig-Standard article, McLeod noted Milstead’s numerous awards, including an Amelia Earhart Medallion from the First Canadian Chapter of the Ninety-Nines, an international women’s pilots club.

Milstead was made a member of the Order of Canada in 2004 and was inducted into the Canadian Aviation Hall of Fame in 2010.

Another stamp in the set commemorates an individual who also made contributions to the war effort during WWII. Wilbur Rounding Franks (1901-86) developed what became the world’s first anti-gravity suit to be used in combat.

Franks worked conducting cancer research at the University of Toronto before joining an aviation medicine research team in 1939 to study the risks caused by strong gravitational forces experienced during high-speed aerial maneuvers, according to Canada Post.

High gravitational forces can pull blood from pilots’ heads to the lower parts of their bodies and cause them to lose consciousness.

Details said that Franks developed and personally tested a rubber flying suit lined with water-filled pockets, which created enough hydrostatic pressure to counter the pull of blood from gravitational forces.

The last stamp in the set celebrates the Canadian flight-simulator technology that allows pilots to train without having to expose themselves to risks such as the ones posed by gravitational forces.