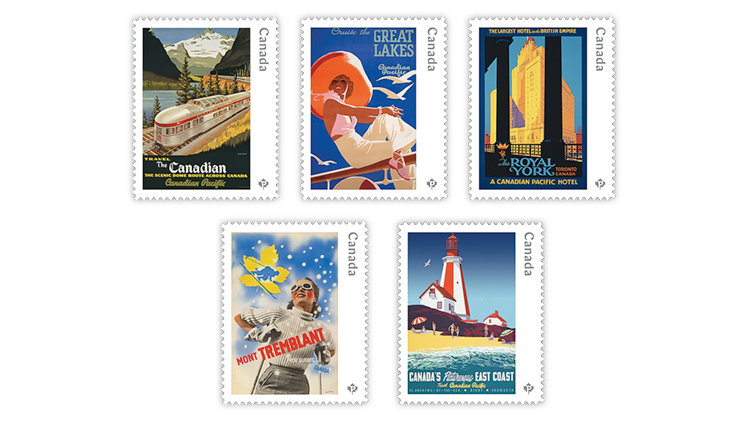 The stamps were unveiled on their issue date as part of the opening ceremonies at Capex 2022, the June 9-12 international single-frame stamp championship exhibition in Toronto, Ontario, Canada.

In a press release, Canada Post explained that the country’s popularity as a tourist destination surged in the 20th century due to railway expansion and the advent of the automobile.

The distinctive and elegant style of these travel advertisements promoted the growth of a golden age for commercial art in the country, according to Canada Post. The five posters included in this stamp issue span around 20 years from this golden age.

One stamp from the set shows a poster featuring the observation car on the Canadian, Canadian Pacific Railway’s premier transcontinental train, according to Canada Post. The Rocky Mountains can be seen in the background of the 1955 poster by Canadian artist Roger Couillard.

The poster on another stamp shows a woman sitting atop a ship’s railing against a background of a blue sky with seagulls in flight; text encouraging the viewer to cruise the Great Lakes. Canada Post said the poster dates from around 1937 and credits British artist Tom Purvis for the design.

Toronto’s Royal York hotel dominates the background of the poster on another stamp. The poster, by Norman Fraser and dated around 1935, calls this luxury hotel the largest in the British empire.

Canada Post credits Austrian-born artist Herbert Bayer with the artwork on the 1939 poster showing a woman skiing at the Mont-Tremblant ski resort in Quebec. While the woman’s outfit may not seem practical for skiing (especially by today’s standards), it may point to specific marketing decisions from what Canada Post calls “an era of glamorous travel.”

The remaining stamp features a poster advertising Canada’s picturesque east coast, with people on the beach and a lighthouse in the background. The poster, by Saskatchewan-born artist Peter Ewart and from around 1950, names the towns of St. Andrews by-the-Sea in New Brunswick, and Digby and Yarmouth in Nova Scotia.

Paprika of Montreal, Quebec, designed the stamps. They were printed by Lowe-Martin.

The two souvenir sheets each contain the five stamps. One sheet also is overprinted with the Capex 2022 logo.

In addition, Canada Post also is offering postal cards sold individually and in a set of five, and an official first-day cover.