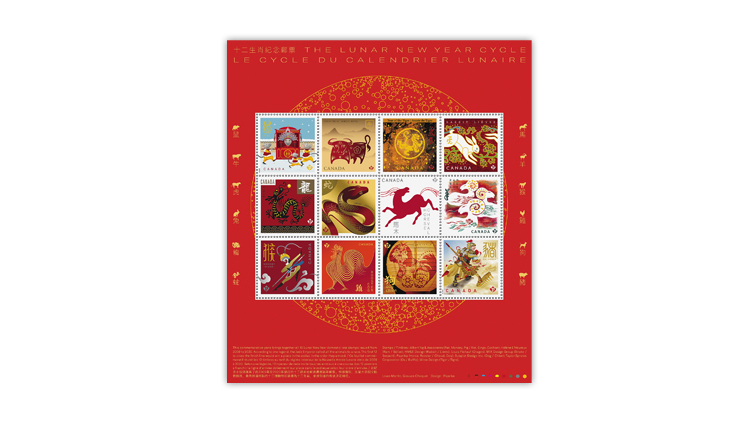 Canada Post is celebrating the end of its 12-year Lunar New Year stamp series with a retrospective that “brings together in a single issue all of the stamps” from the series. This retrospective includes 24 stamps to be issued Jan. 15 in a pane of 12 and a booklet pane of 12.

The stamps in the new pane of 12 are moisture-activated. They show the designs of the 12 permanent-rate stamps in the series, and like those stamps each new stamp includes the letter P inside a maple leaf to indicate that it pays the permanent domestic letter rate (currently 92¢). Also based on Canada Post’s publicity image of the pane, each stamp contains microprinting with a 2021 year date.

The self-adhesive booklet stamps reuse the designs of the previous international-rate stamps. However, now each stamp is nondenominated, paying the permanent domestic letter rate.

Also to be issued Jan. 15 is a moisture-activated uncut press sheet including 12 souvenir sheets, one from each year in the series.

It is possible that collectors may have 36 new stamps to add to their collections, depending on how the stamps in this Lunar New Year retrospective were produced.

In announcing the stamps in its new-issue bulletin Details, Canada Post included this disclaimer, “Stamp designs and printing processes are based on, but not identical to, the original designs.”

Jim Phillips, Canada Post’s director of stamp services, said in Details: “Even before we began this series of Lunar New Year stamps, we envisioned bringing them all together for a grand finale.

“That required a plan from the very beginning. We developed standardized specifications that made the stamps consistent across issues in terms of dimension, format and palette, but still allowed sufficient creative freedom for each to be spectacular in its own right.”

Lowe-Martin printed the new pane of 12, the booklet pane of 12 and the uncut press sheet.

The booklet pane of 12 stamps was printed by lithography with seven colors of ink, embossing and foil stamping in a quantity of 250,000 booklets (product no. 414158111).

A first-day cover was not listed among the products being released for this stamp issue.