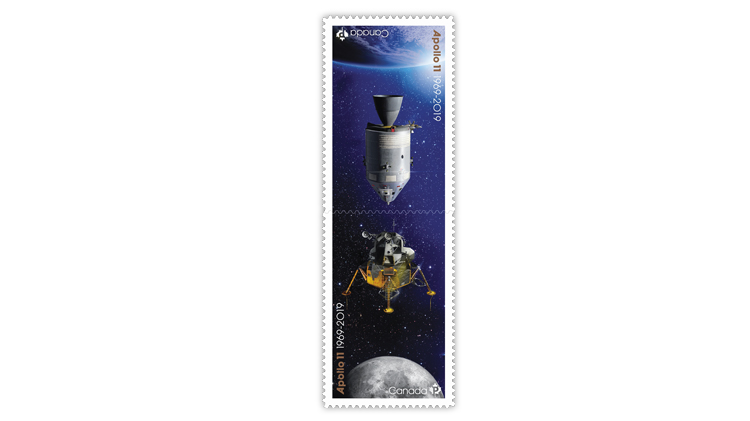 On June 27, Canada Post unveiled a pair of stamps commemorating the 50th anniversary of the first manned moon landing. The two permanent-rate stamps were issued on the same day in a booklet of 10 and pane of six. 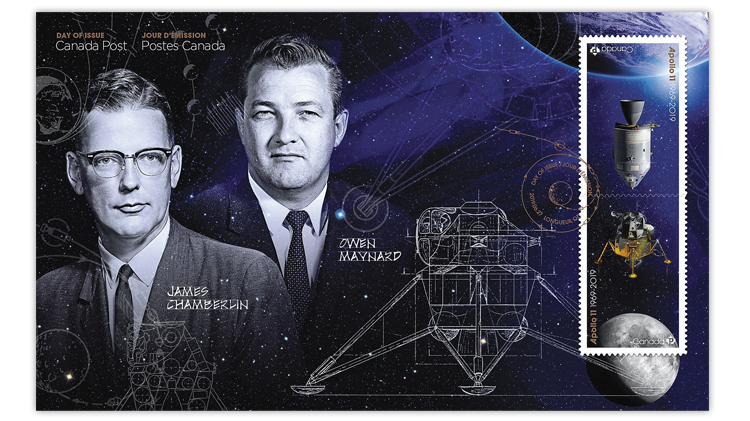 Canada Post’s first-day cover features two Canadian engineers that played key roles in the success of the Apollo 11 mission: James Chamberlin and Owen Maynard. The first-day cancel is from Longueuil, Quebec, home of Heroux-Devtek, the company that manufac
Previous
Next

Canada’s contributions to the Apollo 11 mission are highlighted on two stamps issued June 27 by Canada Post to commemorate the 50th anniversary of the first manned mission to the moon.

The designs and the subject of the stamps were revealed on the June 27 issue date, although Canada Post had provided a hint with the promise of a June stamp issue “that is out of this world,” in a report in the April-June issue of its Details magazine.

A Canada Post publicity image of a pair of the new permanent-rate (currently 90¢) stamps is shown nearby. The pair is tete-beche, with one stamp upside down in relation to the other.

The top, or upside down, stamp in this image depicts the Apollo 11 command and service modules and Earth. The bottom stamp shows the lunar lander Eagle nearing the surface of the moon.

Each stamp is inscribed “Apollo 11 1969-2019.” The country name and “P” inside a maple leaf emblem for permanent-rate stamps are also included in the designs.

Matthew Clark of Subplot Design Inc. of Vancouver, British Columbia, designed the stamps. Lowe-Martin printed them in a booklet of 10 stamps (five pairs) and in a pane of six stamps (three pairs).

In the press release announcing the stamps, Canada Post said: “Canadian engineers working at NASA, and a company based in Longueuil, Que. that built part of the lunar lander, were instrumental in making the mission a success.”

The engineers are James Chamberlin (1915-81) and Owen Maynard (1924-2000), and the company is Heroux-Devtek. They are honored on Canada Post’s official first-day cover, which was canceled at Longueuil and includes portraits of Chamberlin and Maynard on the front and their biographies on the reverse.

Chamberlin was born in Kamloops, British Columbia, and Maynard in Sarnia, Ont. Both moved to the United States in 1959 after the Canadian government canceled the project to build the supersonic fighter aircraft CF-105 Avro Arrow.

Before Apollo 11, Chamberlin served as head of engineering for the first U.S. space flight program, Project Mercury, and later as the project manager and chief designer for the Gemini spacecraft.

Canada Post said of Chamberlin’s role in the 1969 manned moon mission: “He helped determine the type of spacecraft that would transport the Apollo 11 astronauts and was one of the first at NASA to recognize that flying directly to the moon wasn’t the best option. Instead, Chamberlin favoured having a smaller landing module travel to lunar orbit attached to the main spacecraft, then descend to the moon’s surface and later reconnect with the main spacecraft. This approach, known as lunar orbit rendezvous, became fundamental to the Apollo program.”

Canada Post said that Maynard, like Chamberlin “played an important role in determining the safest way to reach and land on the moon.”

Head of the Systems Engineering Division for the Apollo spacecraft program, Maynard “sketched early designs of the main Apollo command module and is credited as the person at NASA most responsible for the design of the lunar lander,” Canada Post said.

Maynard also planned the sequence of missions that led to Apollo 11.

Heroux-Devtek, founded in 1942 as Heroux Machine Parts Ltd., originally specialized in machine tooling of aircraft components. In 1960, the company changed its focus to landing gear. In 1969, it manufactured the landing gear legs for the Eagle lunar module. These legs remain on the moon.

In a 2009 story for the 40th anniversary of the moon landing, Sheryl Ubelacker of the Canadian Press news agency wrote, “ … even before Neil Armstrong’s booted feet stepped onto the rocky, crater-pocked surface of the moon, Canadian-made legs on the lunar landing module had settled into the satellite’s dust first. The splayed legs were produced from light-weight aluminum using a compressible honeycomb design by Quebec’s Heroux-DEVTEK, which won the NASA contract.”

According to Canada Post, the stamps include hidden images of the moon and stars that are visible under ultraviolet light.