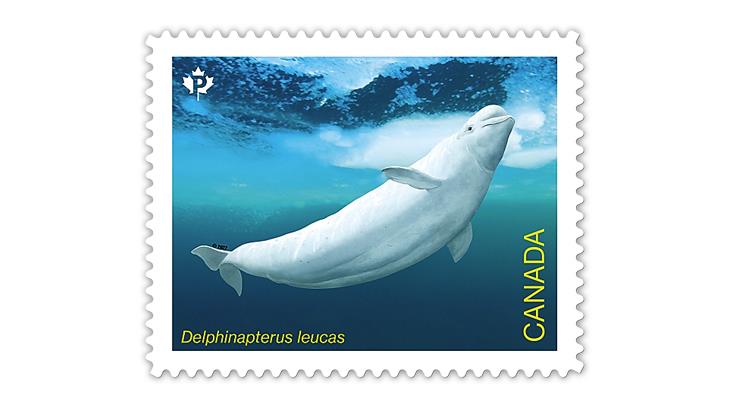 A beluga whale graces one of the designs in a May 20 set of five nondenominated, permanent-rate Endangered Whales stamps from Canada Post. 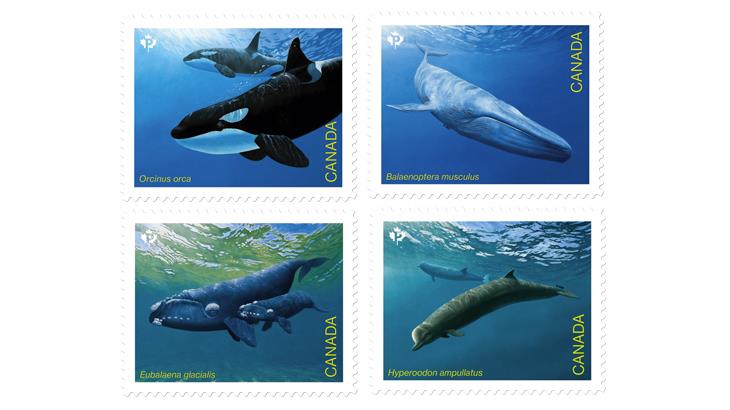 Canada Post seeks to raise awareness about the condition of five whale species categorized as endangered by the Committee on the Status of Endangered Wildlife in Canada with a set of five stamps issued May 20.

“Canadian waters are home to a remarkable diversity of whales, with more than 30 species,” Canada Post said in a press release. “Sadly, some whale populations are at risk. Whales continue to die from ship strikes or entanglement in fishing gear and debris. Pollution, climate change and ocean noise also threaten their populations.”

The nondenominated, permanent-rate (currently 92¢) Endangered Whales stamps were issued in a booklet of 10 with two stamps of each design and in a souvenir sheet with the five different designs se-tenant (side-by-side).

Artist David Miller illustrated the stamps, with each design showing a different whale categorized as endangered.

The beluga whale (Delphinapterus leucas) lives in groups of several hundred. It is called the canary of the sea because it uses a variety of clicks, whistles and other noises to communicate.

Beluga whales have flexible, rounded parts on their heads, called melons, that allow them to navigate, hunt and find holes in the ice by locating objects using reflected sound in a process called echolocation.

In Canada, beluga whale populations are at risk in the St. Lawrence Estuary, Cumberland Sound and Ungava Bay.

As the largest animal on earth, the blue whale (Balaenoptera musculus) can grow to a length of almost 98 feet. It is also one of the loudest animals, with the ability to make sounds that can be heard hundreds of miles away.

Blue whales spend summers in northern polar waters and migrate south for the winter. Population numbers were once over 350,000 worldwide, according to Canada Post, and are now below 10,000. A $10 Canadian stamp (Scott 2405) issued Oct. 4, 2010, also features a blue whale.

Another social species, the killer whale (Orcinus orca) lives in family-based groups and typically remains with its mother for life.

Orcas are called killer whales despite belonging to the dolphin family. A killer whale appears on a 57¢ Canadian stamp from 1987 (Scott 1173).

Three distinct groups of killer whales – transient, offshore and resident – live in the Pacific Ocean off Canada. The resident group includes northern and southern populations, according to Canada Post, and the southern residents number about 75 with few successful births in recent years.

The North Atlantic right whale (Eubalaena glacialis) earned its name by being considered the right whale to hunt. This was due to its slow speed and abundance of oil and baleen, the strong and flexible whalebone once used in corsets and other kinds of clothing. Hunting led to the decimation of populations in the 19th century, and current projections warn the species could be extinct in 30 years, according to Canada Post.

The Gulf of St. Lawrence is an important habitat for North Atlantic right whales, and they can be seen socializing and displaying a range of other behaviors at the water’s surface. A North American right whale is pictured on two 2007 stamps (2229a, 2230) in the Endangered Animals series.

One of the world’s deepest diving mammals, the northern bottlenose whale (Hyperoodon ampullatus) often holds its breath for over an hour.

Once heavily hunted, northern bottlenose whales’ curiosity about stationary vessels and their tendency to remain close to wounded group members made them easy prey.

The northern bottlenose whale is only found in the North Atlantic Ocean, where it frequents deep waters associated with underwater canyons. A population at the Scotian Shelf, one such canyon, is estimated at only 164 individuals, according to Canada Post.