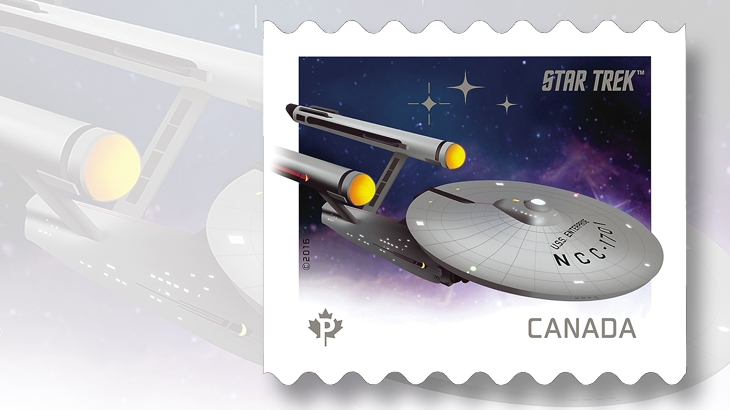 The Federation starship Enterprise is one shown on a coil stamp that will alternate with a stamp showing a Klingon vessel. 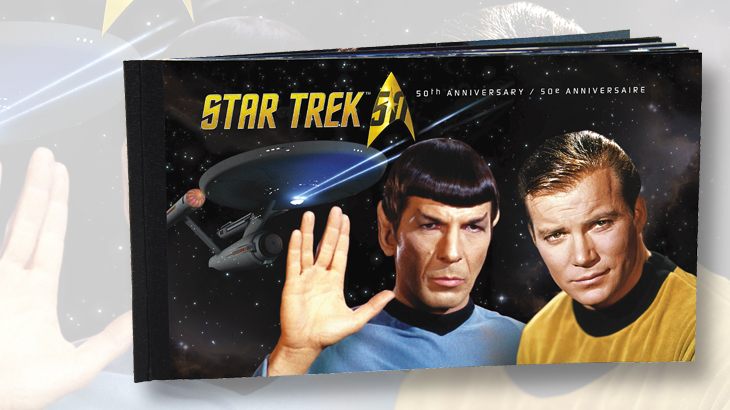 Along with souvenir sheets, booklets, coils, and pane varieties, most of Canada Post’s Star Trek stamp designs will be offered in a prestige booklet with multiple panes. 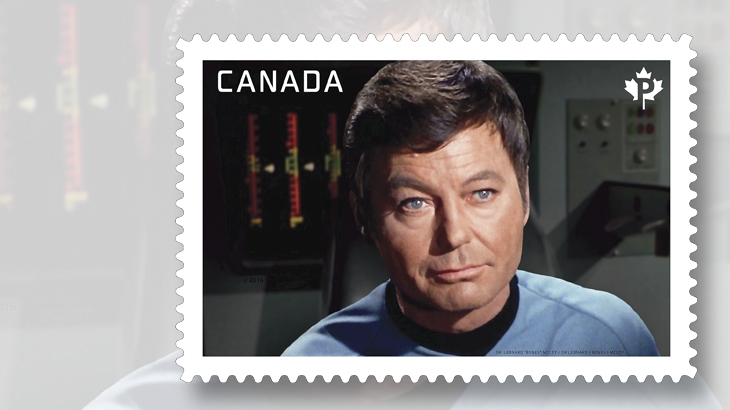 The role of Dr. Leonard McCoy was played by DeForest Kelly throughout the original TV series and the subsequent film sequels. 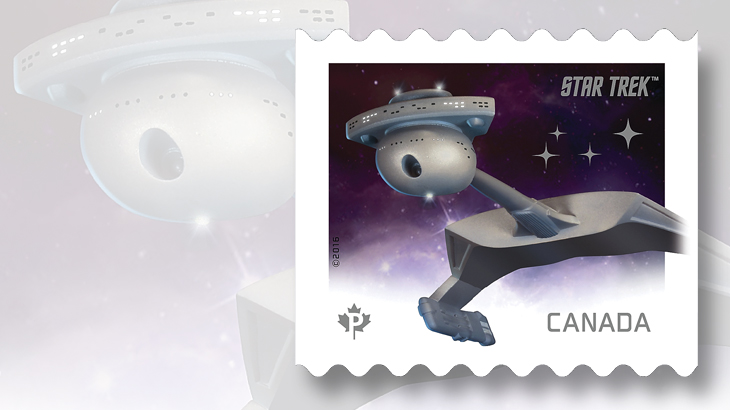 The second space vessel shown in the set is a Klingon D7-class battle cruiser. 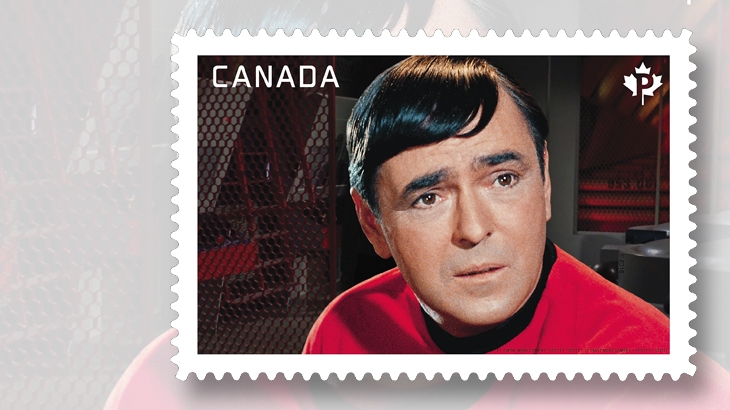 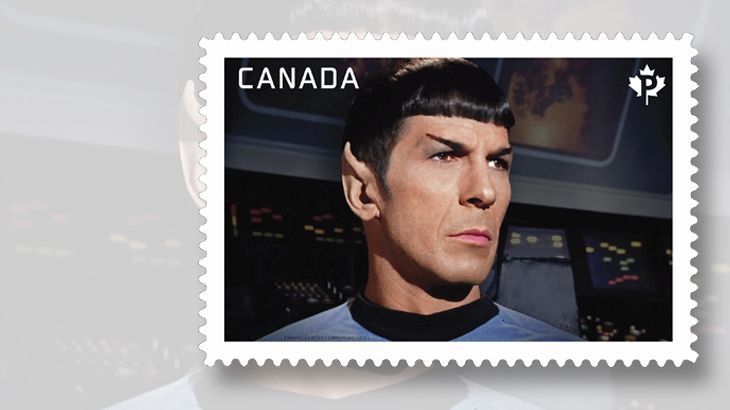 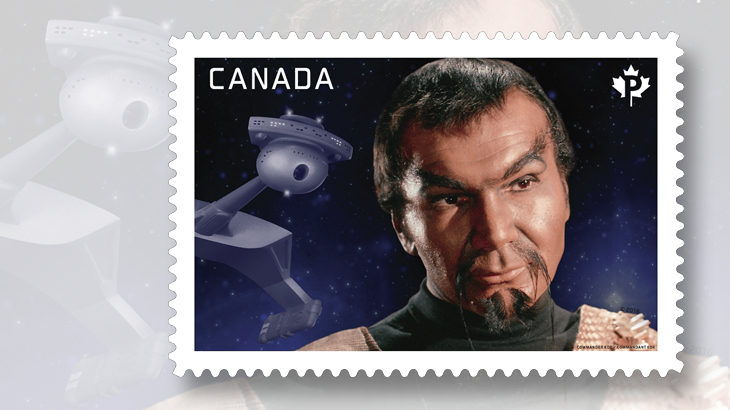 John Colicos, a stage and screen actor from Canada, is shown in his role as Klingon Commander Kor. 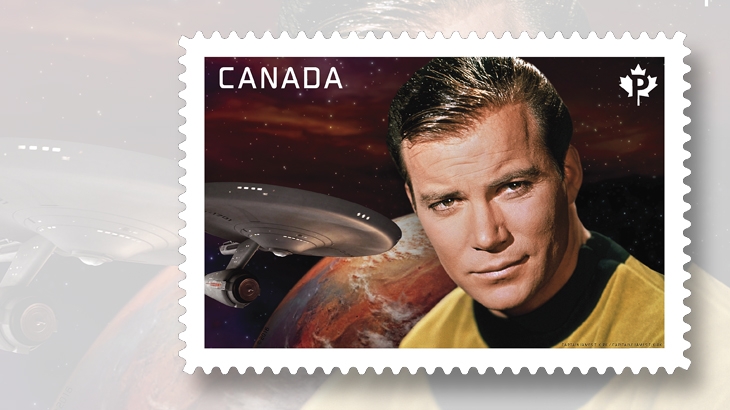 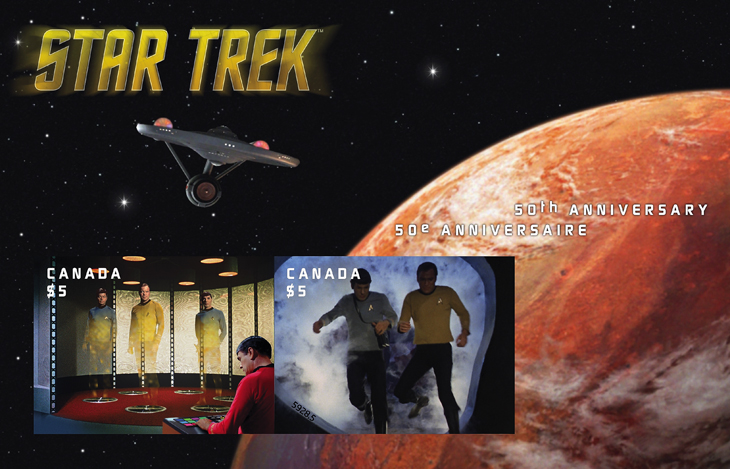 Canada Post issued its new Star Trek 50th anniversary set May 5, with stamps and first-day covers in almost every imaginable format, including a prestige booklet.

And revealed for the first time on the day of issue, the set also includes two additional stamps utilizing lenticular printing, “a method that makes images appear in motion when viewed from different angles,” according to Canada Post.

The lenticular stamps are denominated $5 each, and are offered in a souvenir sheet of two.

The scenes on the lenticular stamps feature the transporter from the Enterprise on one, and a glimpse of the popular television episode The City on the Edge of Forever on another.

“Stamp designer Kosta Tsetsekas, of Vancouver-based Signals Design Group, saw lenticular as an opportunity to recognize both the show’s futuristic vision and the special effects that brought it to life,” according to Canada Post.

The lenticular souvenir sheet selvage pictures the Enterprise in orbit above a planet. The back side includes informational text.

The Kor stamp and the Klingon battle cruiser stamp were unveiled April 28 during a panel presentation on Conversational Klingon taking place at the Calgary Comic and Entertainment Expo.

Colicos was born in Toronto, Ontario. Shatner and Doohan were also born in Canada. Of the five actors featured, only Shatner, who is 85, is still living.

The stamps showing the Enterprise and the Klingon ship will be issued alternating in a single coil roll of 50 stamps. Collectors desiring a smaller quantity will be able to purchase coil strips of four or 10.

In addition, a souvenir sheet of two stamps showing the same designs of the two starships is being offered by Canada Post.

The souvenir sheet selvage pictures the Enterprise in action, firing its phasers.

The coil stamps and the pair in the souvenir sheet are all permanent-rate stamps paying the current 85¢ (Canadian) domestic letter rate.

The coil stamps are self-adhesive, and the souvenir sheet stamps are perforated with moisture-activated adhesive.

The five commemoratives will be sold as permanent-rate self-adhesive stamps in booklets of 10 with a cover design showing the five characters and the Enterprise in orbit.

Also available will be a pane of five perforated stamps with a large selvage area showing a design similar to the booklet cover.

Unlike the booklet stamps, the perforated stamps in the pane of five have moisture-activated adhesive and come in various denominations: the Kirk stamp is permanent rate, while the other stamps are $2.50 (Spock), $1.20 (McCoy), $1.80 (Scotty) and $1 (Kor).

Each pane in the booklet shows different full color scenes from the television series and includes text describing the action in English and in French.

The eight first-day covers include the seven permanent-rate stamps with full-color photo illustrations as cachets, plus the lenticular stamp souvenir sheet. The first-day covers also can be ordered individually.

The covers are postmarked in the following cities: Kirk in Montreal, Quebec; Spock in Vulcan, Alberta; Scotty in Vancouver, British Columbia; McCoy in Vulcan; Kor in Toronto, Ontario; the lenticular souvenir sheet, the Klingon ship and the Enterprise first-day covers each in Vulcan.

On the picture side of each postal card are three images from one popular episode of the Star Trek original series: The Trouble with Tribbles, A Piece of the Action, Amok Time, Mirror Mirror, and The City on the Edge of Forever.

Canada Post stamp products are available on the Canada Post's website. Stamps and FDCs are available by mail order from Canada Post Customer Service, Box 90022, 2701 Riverside Drive, Ottawa, ON K1V 1J8 Canada; or by telephone from the United States and Canada at 800-565-4362, and from other countries at 902-863-6550.

More on the 50th Anniversary set: