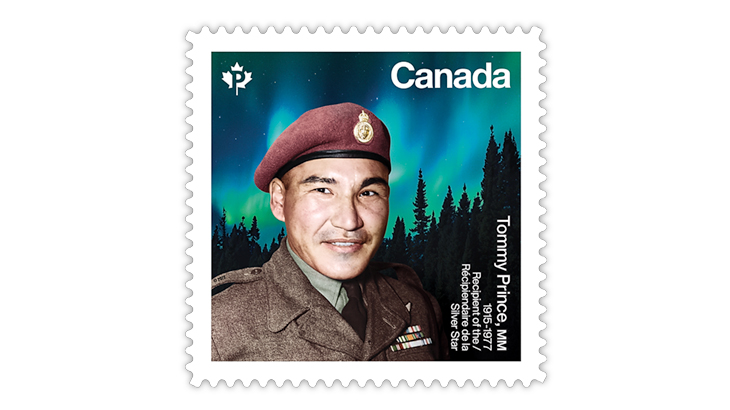 Canada Post will honor Tommy Prince, a decorated Indigenous war veteran, on a stamp to be issued Oct. 28.

“For his service during the Second World War and Korean War, Prince was awarded 11 medals, including the Military Medal and the Silver Star (U.S.). After the Second World War, he served as vice-president of the Manitoba Indian Association, advocating for the abolition of the Indian Act and for the government to respect existing treaties,” Canada Post said.

Canada Post will issue the nondenominated permanent-rate (currently 92¢) Tommy Prince stamp in a booklet of 10.

Prince was born in 1915 into the Brokenhead Ojibway Nation on the St. Peter’s Reserve in Manitoba.

He enlisted with the Royal Canadian Engineers in 1940. In 1942, he joined the 1st Special Service Force, a joint Canadian-United States reconnaissance and raiding unit that became known as the Devil’s Brigade.

Prince established himself as a top soldier known for his marksmanship, stealth and scouting skills — not to mention sheer nerve, according to Canada Post.

Prince served in the 2nd Battalion, Princess Patricia’s Canadian Light Infantry during the Korean War. He died in Winnipeg, Manitoba, in 1977 at age 62.

The stamp shows a photo of Prince in his Korean War uniform in the foreground. The Northern lights in the background “represent the sky above the Brokenhead Ojibway Nation, where he was raised,” according to Canada Post.

Inscriptions on the stamp include Prince’s name, followed by “MM” (Military Medal), the years of his birth and death, and “Recipient of the Silver Star.”

A special unveiling of the Tommy Prince stamp took place Oct. 17 at the Canadian Museum for Human Rights in Winnipeg.

Blair Thomson, creative director and founder of Believe in Studio, designed the stamp using a photograph from the Library and Archives Canada for the foreground. The northern lights image in the background is by Andy Beaver.

The stamp was printed by Lowe-Martin using four color offset lithography. In addition to the stamp, Canada Post is offering an official first-day cover canceled in St. Peter’s Reserve, Manitoba.

Canada Post has not yet announced the printing totals or the product numbers for the stamp and FDC.