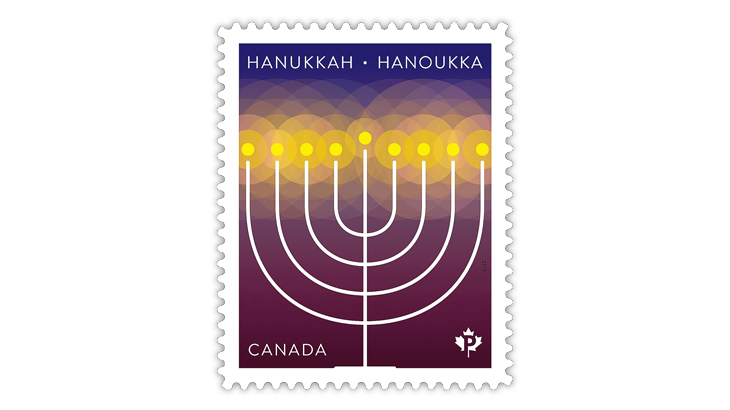 Canada Post’s new Hanukkah stamp will be issued Nov. 14 in Montreal, Quebec, in self-adhesive booklets of 10. A total of 130,000 stamps were printed.

Canada Post will issue a new Hanukkah stamp Nov. 14 in self-adhesive booklets of 10.

The stamp features a stylized menorah with its nine candles shining brightly against a background that transitions from purple at the top to dark red at the bottom.

The “P” inside a maple leaf representing the permanent rate (currently 90¢) appears at bottom right, just below the menorah.

Also available is a first-day cover franked with a single Hanukkah stamp. A series of expanding concentric circles on the decorative envelope represent the nine glowing candles of the menorah.

This circle theme is repeated for the Montreal, Quebec, pictorial postmark on the cover, which features nine three-ring circles arranged in a row. The middle three-ring circle, representing the menorah’s shamash (helper) candle, sits slightly above the other eight circles.

Context Creative, a marketing firm based in Toronto, Ontario, designed the Hanukkah stamp.

The Hanukkah stamp measures 28 millimeters by 35mm and was printed in a quantity of 130,000. A total of 7,000 Hanukkah FDCs were produced.

The new Hanukkah stamp and accompanying FDC are available from Canada Post’s online shop, www.canadapost.ca/shop. Stamps and FDCs are available by mail order from Canada Post Customer Service, Box 90022, 2701 Riverside Drive, Ottawa, ON K1V 1J8 Canada; or by telephone from the United States or Canada at 800-565-4362, and from other countries at 902-863-6550.