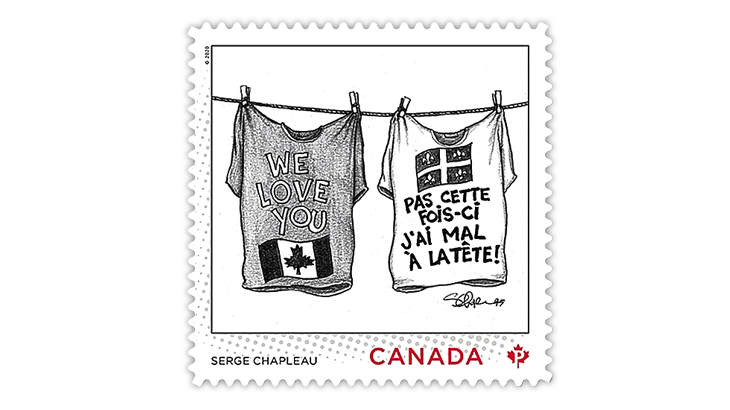 Throughout this week, Canada Post also will reveal the designs of stamps paying tribute to Brian Gable (to be unveiled Oct. 5), Terry Mosher (Oct. 6), Duncan Macpherson (Oct. 7) and Bruce MacKinnon (Oct. 8). All except Macpherson (1924-93) are still alive.

The five Editorial Cartoonists stamps will be issued on Oct. 8.

In the Oct. 4 press release announcing the Serge Chapleau stamp, Canada Post referred to this editorial cartoonist at La Presse as “a true pioneer of his profession.”

Canada Post also said: “Chapleau has drawn inspiration from the biggest European cartoonists and is known for his unique style and high-precision work. From his very first drawing, a portrait of singer Gilles Vigneault published in Perspectives magazine in March 1972, Chapleau became an overnight sensation and quickly established himself as one of the top cartoonists in the Montreal press. After working for various publications, including Le Devoir, L’actualite and 7 jours, he became staff cartoonist for daily newspaper La Presse in 1996, a position he holds to this day.”

“Through more than 7,000 drawings over the past 50 years, Chapleau has made people laugh and think by conveying the zeitgeist in a single image. … ”

He also made people laugh with the portrayal of the character Gerard D. Laflaque (first as a puppet then through animation) on a television series aired on Radio Canada from 2004-19.

The drawing selected for the design of the nondenominated, permanent-rate (currently 92¢) stamp was created in 1995 in response to a referendum on whether or not Quebec should declare sovereignty. By a narrow margin (50.58 percent), the citizens of Quebec voted to remain as a province of Canada.

Chapleau’s editorial cartoon shows two T-shirts hanging on a clothesline with “We Love You” and Canada’s maple leaf flag on one shirt and “Pas cette fois-ci j’ai mal a la tete!” (French for “Not this time, I have a headache!” and Quebec’s fleurs-de-lis flag on the other.

Among the honors Chapleau has received for his work are eight National Newspaper awards in the editorial cartooning category, and he was named a member of the Order of Canada in 2015.

They also will be available from many new-issue stamp dealers, and from Canada Post’s agent in the United States:
Interpost, Box 400, Hewlett, NY 11557.