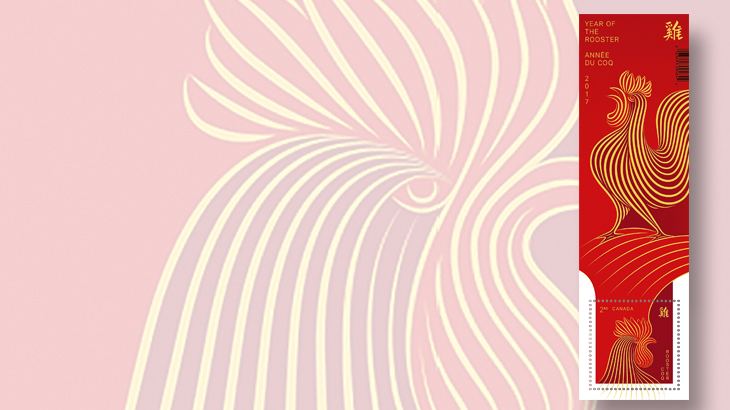 A long, scroll-like souvenir sheet contains a single example of the $2.50 Year of the Rooster stamp. 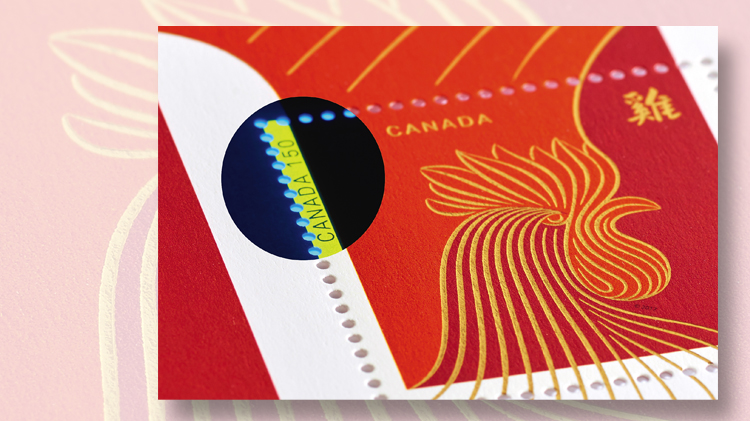 This Canada Post photograph shows the “Canada 150” text that is hidden on the $2.50 international-rate stamp celebrating the year of the rooster. The text can be seen when viewing the stamp under ultraviolet light. 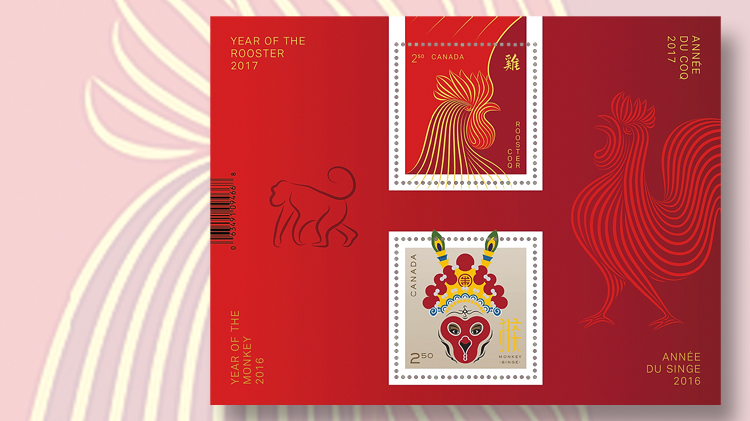 Canada Post calls this a “transitional” souvenir sheet. It includes this year’s $2.50 Year of the Rooster stamp and last year’s Year of the Monkey stamp. 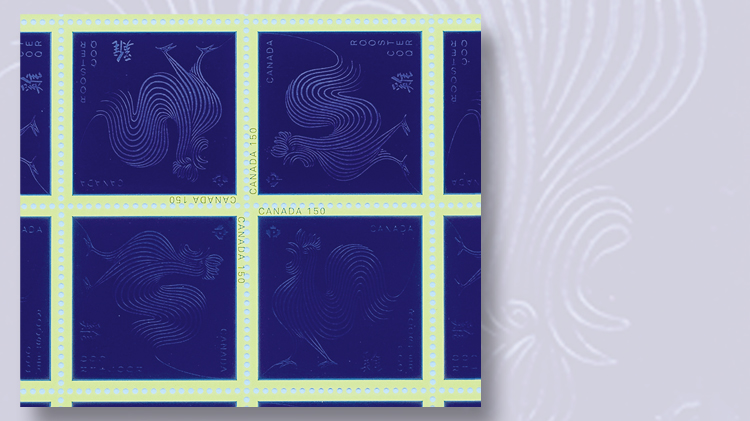 All of Canada’s commemorative stamps issued in 2017 will include hidden references to the 150th anniversary of confederation. On the pane of 25 permanent-rate stamps, “Canada 150” is revealed on four stamps in the bottom two rows when the pane is viewed u 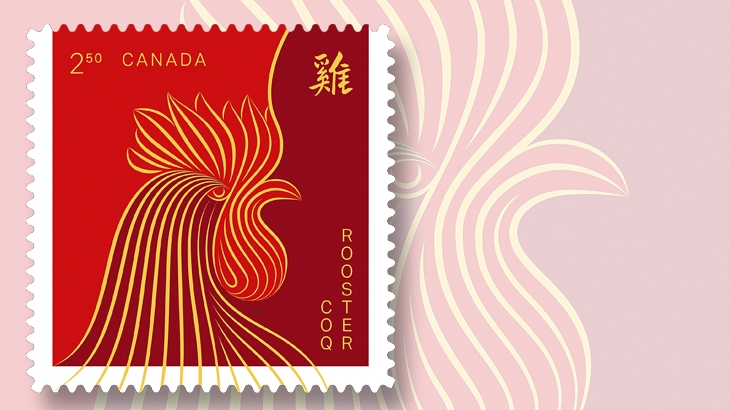 Canada’s international-rate Year of the Rooster stamp depicts a rooster’s head in profile. It was designed by Paprika, with calligraphy by Albert Ng. 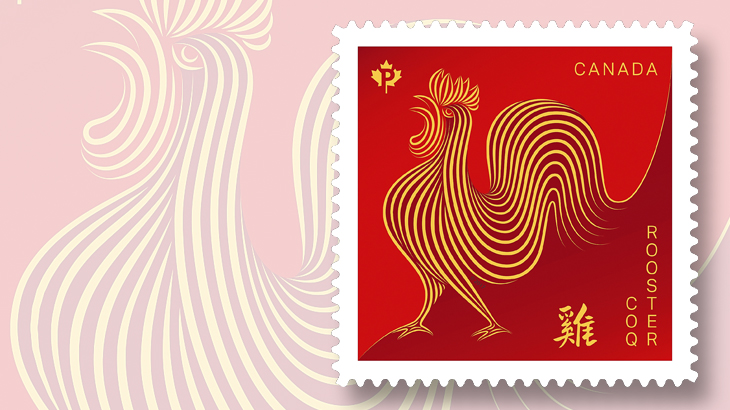 Canada Post welcomed the year of the rooster with stamps and postal stationery issued Jan. 9. The domestic-rate stamp with a “P” for permanent shows an image of a rooster with its chest puffed out.
Previous
Next

Canada Post is hiding references to the 150th anniversary of Canada’s confederation in all of its 2017 stamp issues, starting with the Year of the Rooster on Jan. 9.

Jim Phillips, director of stamp services for Canada Post, said in Details (Canada Post’s publication for collectors): “It’s a special year, so we wanted to do something fun, interesting, even a bit challenging for collectors and consumers and give everyone a reason to take a closer look at this year’s philatelic offerings. As such, every stamp that comes out in 2017 will have a special reference to Canada’s sesquicentennial.”

Some of the references will be easy to spot, while others might be more challenging, according to Phillips. He added that all of them will be revealed in issues of Details.

For the Year of the Rooster issue, the references appear in tagging around stamps in a pane of 25, a booklet, and the uncut press sheet.

The Year of the Rooster issue includes two stamps: a nondenominated domestic “P” permanent-rate stamp (85¢) sold in booklets of 10 and panes of 25; and a $2.50 international-rate stamp available in booklets of six and two different souvenir sheets. Two postal cards, one imprinted with the permanent-rate design and one with the international-rate design, also were issued.

Both stamps are gold and red, and feature different images of symbolic roosters. Each design also includes the word rooster in Chinese (ji), French (coq), and English in the lower right.

Paprika, a firm in Montreal, designed the stamps, using calligraphy by Albert Ng.

Lowe-Martin printed the stamps by lithography with foil stamping. The stamps are square, measuring 32 millimeters by 32mm.

Canada Post describes the design of the domestic-rate stamp as an undulating pattern featuring “the bird in full form — its crest puffed out with pride.”

The rooster’s “stately profile” is captured in gold lines on the $2.50 stamp, according to Canada Post.

One souvenir sheet, measuring 40mm by 140mm, contains a single $2.50 stamp at the bottom. The selvage above the stamp includes the rooster image from the domestic-rate stamp and inscriptions relating to the year of the rooster.

The booklet stamps are self-adhesive, while those in the pane of 25 and the two souvenir sheets have moisture-activated gum.

The stamps in the pane of 25 are rotated in relationship to each other on the pane to complement the “wavy design,” according to Canada Post.

This is the first time that Canada Post has used such an arrangement. The United States Postal Service used a similar layout for the Jimi Hendrix pane of 16 issued in 2014 (Scott 4880).

Included in the margin of Canada’s Year of the Rooster  panes of 25 are different well wishes and blessings for the new year in the four corners, images of the 12 animals of the Chinese zodiac (along the bottom), and Canada’s sesquicentennial logo in gold (center bottom).

In addition, under ultraviolet light the words “CANADA 150” appear dropped out of the tagging between the second and third stamps in the bottom two rows of the pane, according to a diagram in Details.

The same inscription also can be seen when looking at the booklet of six $2.50 stamps under ultraviolet light. It is located on the left side of the middle stamp in the top row.