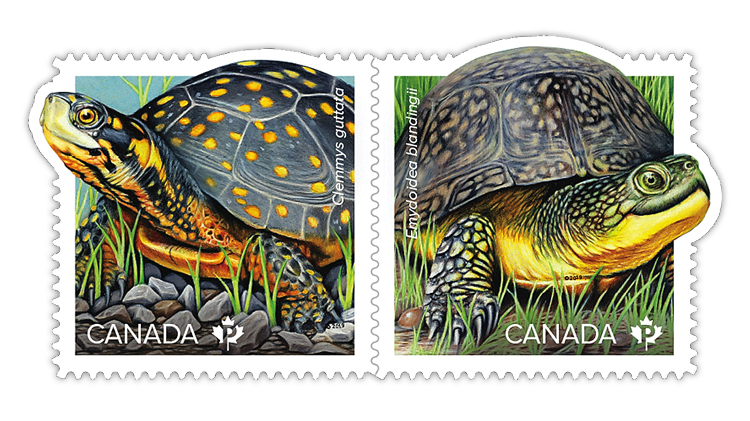 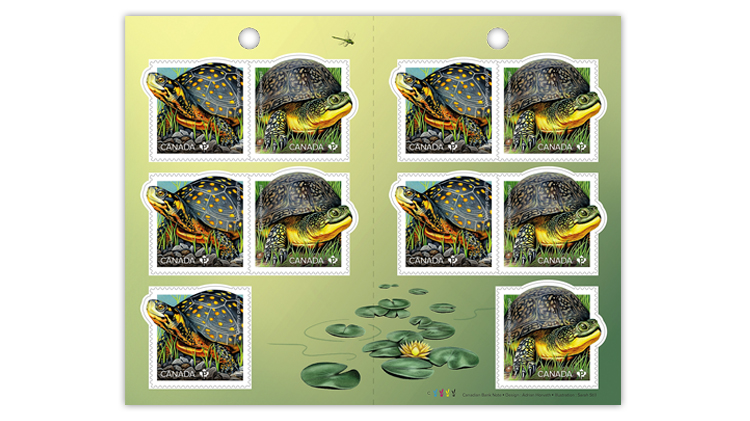 Canada’s Endangered Turtles stamps were printed in booklets of 10 and in a souvenir sheet of two stamps. The booklet pane includes color registration marks in the shape of cattails, located below the lily pads on the right.
Previous
Next

American Tortoise Rescue, a nonprofit organization sponsors World Turtle Day to help people celebrate and protect turtles and tortoises and their disappearing habitats around the world. The first World Turtle Day was observed in 2000.

The stamps are nondenominated paying the basic domestic letter rate (currently 90¢). Canada Post calls these permanent stamps, and they are identified with the letter “P” inside a symbolic maple leaf.

One stamp depicts the spotted turtle (Clemmys guttata), and the other shows Blanding’s turtle (Emydoidea blandingii). Both species have been assessed as endangered by the Committee on the Status of Endangered Wildlife in Canada.

As its name suggests, the spotted turtle has spots. The website of the Ohio Department of Natural Resources (www.ohiodnr.gov) describes it as a “small (less than six inches) black turtle with distinctive yellow spots on the carapace (top of shell). The head of the spotted turtle is often colorfully adorned with reddish-orange to yellow blotches on the sides and chin. The forearms may also be bright orange. The plastron (bottom of the shell) is yellowish-tan with dark markings.”

In the United States, the spotted turtle is found along the eastern seaboard and in the Great Lakes region as far west as Indiana. In Canada, it is “now found only in isolated pockets around central and southern Ontario,” according to Canada Post.

Loss of habitat and collection for the illegal pet trade have contributed to the decline of the spotted turtle population.

The website of the Nature Conservancy (www.nature.org)  said that this medium-sized turtle is “recognizable by the bright yellow on its chin and throat and the light dots across its high-domed shell.”

In Canada, Blanding’s turtle inhabits ponds, marshes and shallow lakes and streams in the Great Lakes-St. Lawrence region of Ontario and Quebec with a small population of less than 500 at Kejimkujik National Park near Maitland Bridge in southwestern Nova Scotia. It is also found in about 15 states in the United States.

The stamps are cut to shape, with the turtle’s head extending on the left side of the Spotted Turtle stamp, and the right side of the Blanding’s Turtle stamp. The two turtles are looking away from each other in the se-tenant pair.

In the April-June issue of Canada Post’s magazine for collectors, Details, Horvath said, “I wanted these turtles to pop off the stamp.”

He added that the challenge was “to break the subjects out of the stamp frame in a way that worked in every application,” referring to the booklet, souvenir sheet, official first-day cover and a single stamp used on cover.

The design in the selvage of the booklet pane includes lily pads between the two lower stamps, and a dragonfly at the top. Also in the lower right selvage is the name of the printer, Canadian Bank Note, along with the names of the designer and illustrator, and four symbolic cattail plants.

The cattails are cyan, magenta, yellow and black, respectively, representing that Canadian Bank Note printed the stamps by four-color lithography.

The souvenir sheet contains a se-tenant pair of stamp at the top, with lily pad and dragonfly artwork below. The inscription “Endangered Turtles” in English and French appears in the lower left corner.

Text on the reverse provides a fact (in English and French) about each of the featured turtles:

“Blanding’s turtles (Emydoidea blandingii) can live, and continue to reproduce, for more than 80 years, and possibly much longer.

The official FDC bears a pair of the stamps with a dragonfly postmark from Maitland Bridge, Nova Scotia.

The Endangered Turtles stamps and FDCs are available online from Canada Post at www.canadapost.ca/shop, and by mail order from Canada Post Customer Service, Box 90022, 2701 Riverside Drive, Ottawa, ON K1V 1J8 Canada; or by telephone from the United States or Canada at 800-565-4362, and from other countries at 902-863-6550.