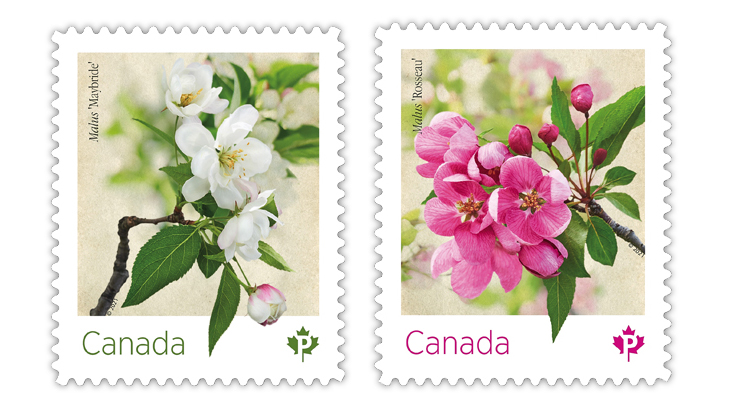 In announcing the stamps in its Details magazine for collectors, Canada Post said: “The sweet fragrance of a crabapple tree in bloom is one of the most pleasant reminders that spring is, quite literally, in the air. The blossoms depicted on this year’s flower stamp issue pay tribute to two Canadian-bred varieties.”

The latter was bred by horticulturist Isabella Preston (1881-1965) and introduced in 1928 at the Central Experimental Farm in Ottawa, Ontario, according to Canada Post.

The Ontario Agricultural College of the University of Guelph called Preston “one of Canada’s most successful breeders of ornamental plants,” and said of her accomplishments:

Two of Preston’s successors at the Central Experimental Farm, Daniel Foster Cameron and Dexter Reid Sampson, bred the Malus “Maybride,” introducing it in 1973, according to Canada Post.

Like apple trees and many other trees that bear fruit, the crab apple is part of the rose family.

Canada is home to both wild species of crab apple trees and hundreds of cultivars.

Canada Post said, “Gardeners plant crabapple trees for their fruit, their hardiness and their spectacular, fragrant blossoms. While sour to the taste, the tree’s fruit makes excellent jams and its wood is often used for smoking meat and cheese. Crabapples are also an important food source for mammals, birds and insects.”

Canada Post reports that it introduced the floral series in 2005 with stamps showing daffodils (Scott 2091-2093).

Canada Post adds that these stamps are best sellers and often used on wedding-related mail, including invitations.