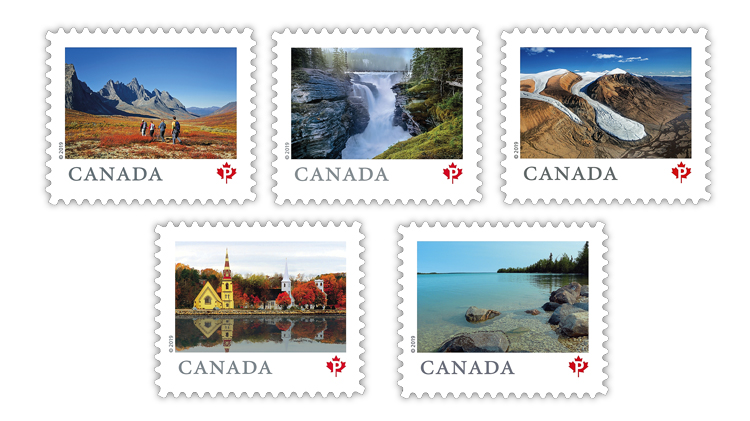 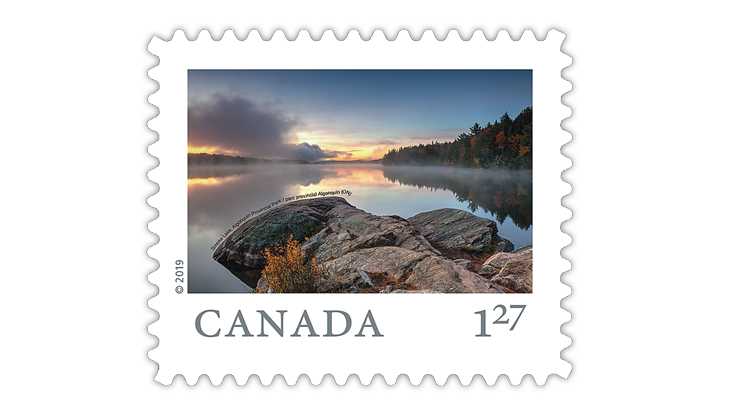 Canada’s new postage rate to the United States is $1.27. The From Far and Wide definitive stamp for that rate features Smoke Lake in Algonquin Provincial Park in Ontario. 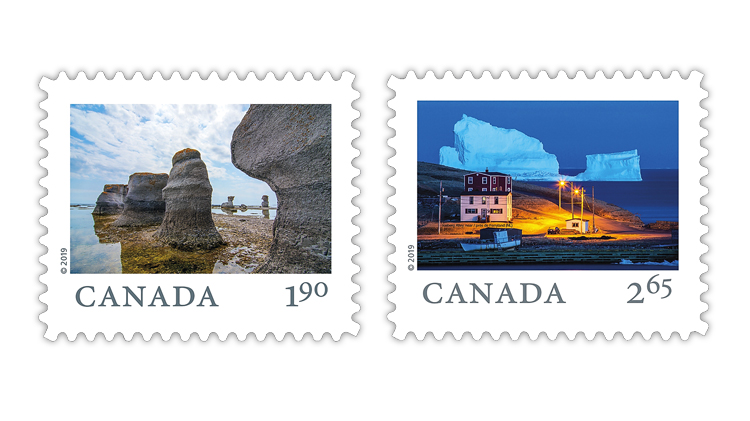 The designs of the two highest denominations in Canada’s Jan. 14 From Far and Wide definitive set of stamps picture photographs of Mingan Archipelago National Park Reserve in Quebec ($1.90), and Iceberg Alley near Ferryland, Newfoundland and Labrador ($2.65). 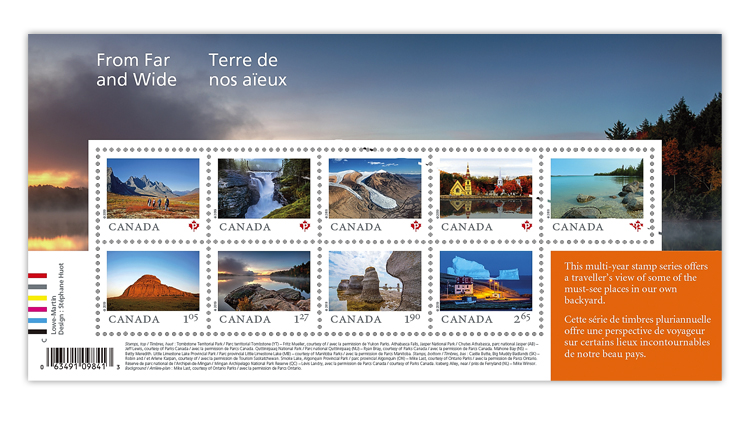 A souvenir sheet includes all nine stamps in the new From Far and Wide definitive set with the designs se-tenant (side-by-side). 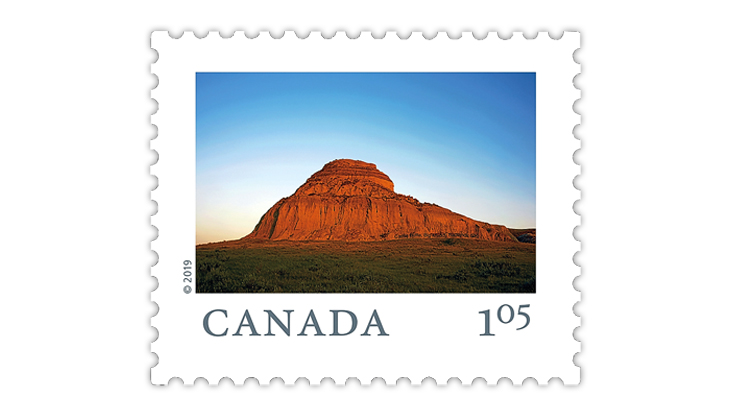 Canada Post increased its postage rates Jan. 14, with a new basic domestic rate of 90¢ for stamps purchased in multiples, such as a booklet of 10. However, the rate to purchase an individual stamp is $1.05. The new $1.05 definitive shows Castle Butte in the Big Muddy Badlands of Saskatchewan.
Previous
Next

The stamps are the second set in the From Far and Wide series that began Jan. 15, 2018.

The series is named after lyrics in the national anthem O Canada, and Canada Post says that the stamp designs provide an armchair journey to some of the country’s “most breathtaking and memorable must-see locations.”

Five of the stamps are nondenominated, with a “P” for “permanent” inside a red maple leaf in place of the denomination. These stamps, which Canada Post calls permanent stamps, are always valid for the domestic first-class rate. As of Jan. 14, the rate is 90¢; it previously was 85¢.

The five permanent stamps are se-tenant in booklets of 10, coils of 100 and in a souvenir sheet that includes all nine designs in the new series.

The first stamp in the booklet depicts a group of four hikers in Tombstone Territorial Park in the Yukon. Like all the stamps in the series, the name of the location is hidden in the design. In this case, the microprinting with the park’s name is on the left, just below the ragged mountains.

The Yukon Territory’s website (www.yukon.ca) said of this remote park: “Tombstone Territorial Park’s 2,200 km2 [approximately 850 square miles) protect a unique wilderness of rugged peaks, permafrost landforms and abundant wildlife, all reflected in a rich First Nations culture. The park is a legacy of the Tr’ondek Hwech’in Land Claim Agreement and lies within their Traditional Territory.”

The second stamp depicts the powerful Athabasca Falls in Jasper National Park in Alberta. Founded in 1907, the park covers approximately 4,250 square miles, making it the largest national park in the Canadian Rockies. It also is part of the Canadian Rocky Mountains Parks UNESCO World Heritage site.

Featured next is the isolated Arctic wilderness of Canada’s northernmost national park, Quttinirpaaq in Nunavut.

A tourism site for the territory (www.nunavuttourism.com) said: “Featuring wilderness and isolation at its most extreme, Quttinirpaaq (pronounced ‘koo-tin-ir-pa-ak’), as the Inuktitut name suggests, really is the ‘top of the world.’ Located at the northern tip of Ellesmere Island in the High Arctic, it is a vast landscape that offers thrilling adventure to those who are rugged enough to explore it.”

In contrast, the fourth stamp captures a serene view of Nova Scotia’s Mahone Bay in autumn. The town is celebrating its 100th anniversary this year, and the three churches shown on the stamp (Trinity United Church, St. John’s Lutheran Church and St. James Anglican Church) are also included on the town’s logo.

The website also explains that “a marl lake changes colour as its water temperature rises and calcite in the water separates, forming tiny crystals. Little Limestone Lake turns from clear to opaque turquoise or even a milky, blue-white in the warm summer weather.”

Canada Post charges a different price for domestic-rate stamps if they are purchased individually. The stamp for the new single-purchase rate of $1.05 shows Castle Butte, a rock formation that rises 200 feet above Saskatchewan’s Big Muddy Badlands.

This sandstone and clay relic from the last ice age, has help to guide indigenous people, early settlers and the North West Mounted Police. In the late 19th and early 20th centuries, outlaws hid in the surrounding badlands.

The postage rate for mail from Canada to the United States jumped 7¢ from $1.20 to $1.27. The $1.27 stamp in the new From Far and Wide set pictures Smoke Lake, one of more than 2,000 lakes in Ontario’s oldest provincial park, Algonquin. The park was established in 1893 and enlarged eight times since.

The remaining two stamps in the set are denominated $1.90 and $2.65 to meet the new rates for oversized mail and international mail, respectively.

Featured on the $1.90 stamp are limestone pillars of Mingan Archipelago National Park Reserve on the Gulf of St. Lawrence in Quebec. According to Canada Post, the reserve is home to the largest concentration of ocean-sculpted monoliths in Canada. Puffins, other marine birds and hundreds of species of plants, lichen and moss also inhabit.

The $2.65 stamp depicts icebergs at Iceberg Alley, Ferryland, Newfoundland and Labrador. According to Canada Post, “Crowds gather each spring and summer to gaze at the spectacular sight of icebergs drifting down from the Arctic toward the Grand Banks.”

This 1,800-nautical-mile journey can take two to three years.

In addition to the souvenir sheet, the four stamps with denominations are available in separate booklets of six and coils of 50.

As with the first set in this series, the stamps were designed by Stephane Huot using photographs from different sources and printed by Lowe-Martin using lithography. Each stamp measures 24 millimeters by 20mm, except for the $1.05 coils stamp which is 26mm by 22. The souvenir sheet is 150mm by 75mm.

The souvenir sheet also was used for the 7,000 Canada Post first-day covers canceled in Mahone Bay, Nova Scotia, with a pictorial cancellation of church steeples.

Canada Post also is depicting the designs of the nine stamps on nondenominated picture postal cards paying the international rate for any destination in the world.

The new Far and Wide stamps and related items are available at www.canadapost.ca/shop. Stamps and FDCs are available by mail order from Canada Post Customer Service, Box 90022, 2701 Riverside Drive, Ottawa, ON K1V 1J8 Canada; or by telephone from the United States or Canada at 800-565-4362, and from other countries at 902-863-6550.