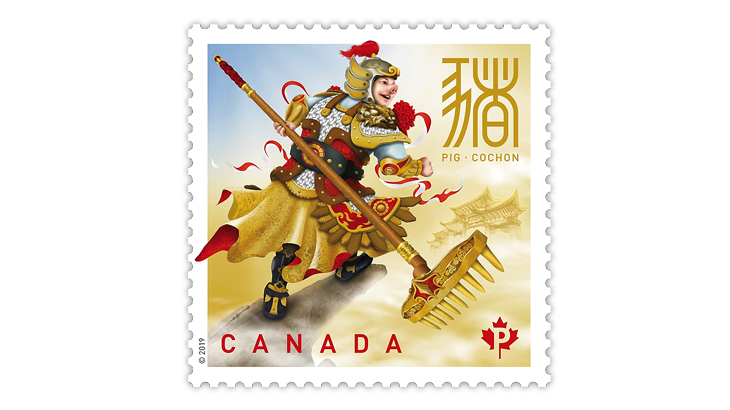 Canada Post issued Year of the Pig stamps and postal stationery Jan. 17. The domestic-rate stamp with a “P” for permanent features a proud Pigsy (Zhu Bajie from the 16th-century Chinese novel Journey to the West) clad in heavenly armor, clutching a rake. 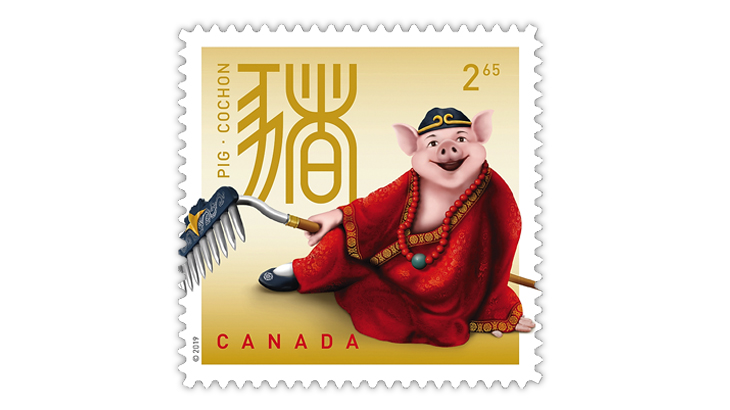 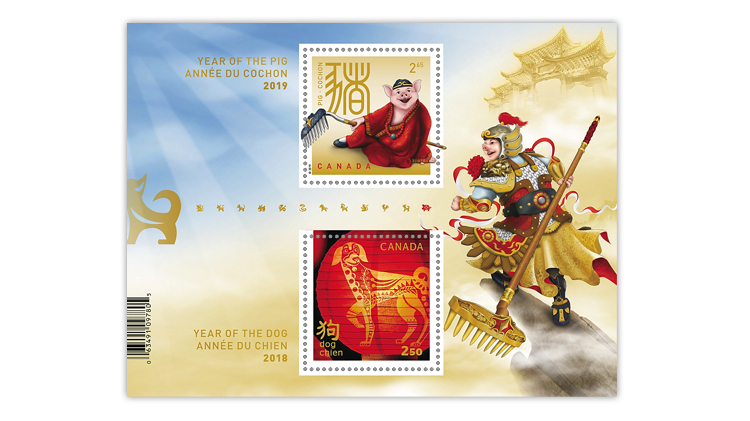 The previous Canada $2.50 Year of the Dog stamp is included on the same souvenir sheet with the new $2.65 Year of the Pig stamp. 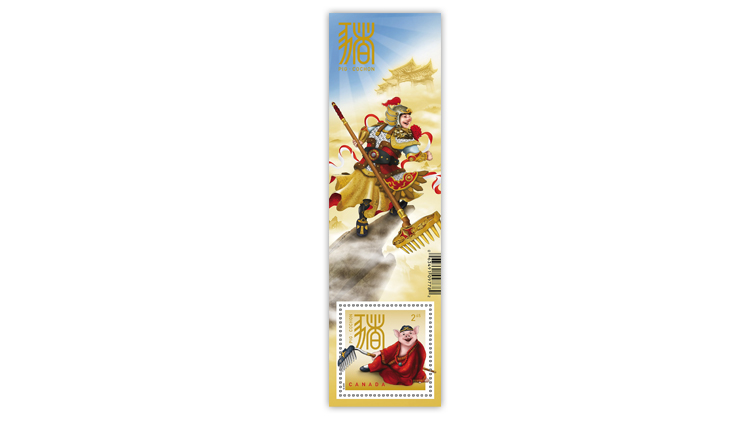 Canada’s $2.65 Year of the Pig stamp also is included in a souvenir sheet.
Previous
Next

Canada Post issued domestic and international-rate stamps Jan. 18 for the upcoming Year of the Pig, which begins Feb. 5 and runs through Jan. 24, 2020.

The permanent (“P”) domestic-rate Year of the Pig stamp (now at 90¢) is offered in embossed, foiled panes of 25 or in a booklet of 10. The international-rate stamp was issued in a six-stamp booklet and in a single-stamp souvenir sheet that includes foil and embossing.

For this year’s Lunar New Year stamps, Albert Ng and Seung Jai Paek of Albert Ng and Associates, based their designs on the story of Zhu Bajie, a colorful character from the 16th-century Chinese novel Journey to the West.

A once powerful figure in heaven, Pigsy — as he became known — was banished for misbehavior to life on Earth as a human-pig hybrid.

The pane of 25 permanent stamps includes calligraphy offering blessings for the New Year. When asked about their significance, Ng said he followed one principal in choosing them: to be meaningful.

“Another challenge,” he added, “was to select sayings that were acceptable to both Mandarin- and Cantonese-speaking audiences.”

The calligraphy, clockwise from top left, translates as follows: “May our world be filled with blessings”; “always smiling, always happy”; “casual phenomena signal peace and prosperity”; and “harmony brings wealth.”

Canada Post also is offering what it calls a transitional souvenir sheet that includes both the international-rate Year of the Dog (the $2.50 stamp was issued Jan. 15, 2018) and the Year of the Pig stamps.

Colour Innovations printed the stamps by lithography, plus foil stamping.

Whether or not you believe in the influence of the Chinese zodiac, ShaoLan Hsueh explained why it’s important in a 2016 Ted Talk, which can be seen on YouTube. Hsueh, a native of Taiwan, is an entrepreneur and author of the book Chineasy: The New Way to Read Chinese (2014).

“Over thousands of years this popular culture has affected people’s major decisions, such as naming, marriage, giving birth and attitude toward each other, and some of the implications are quite amazing,” she said in the talk.

“The collective decisions made by 1.3 billion people (based on the zodiac calendar) have caused fluctuations in economics and demands on everything from health care and education to property and consumer goods. As China plays such an important role in the global economy and geo-politics, the decision made by the zodiac and other Chinese traditions end up impacting everyone around the world.”

In another YouTube presentation (www.youtube.com/watch?v=cwTtxMZutnM), Hillary Phang, a personal consultant, authority on feng shui and founder of Yuan Zhong Siu, made some predictions for the coming year for those born under the pig. Many were a tad unpleasant.

“While work seems fine on the surface, there are hidden problems underneath,” Phang said. “Individuals born in the year of the pig should get these resolved immediately to avoid future problems.”

He warned that business owners could face some troubles.

“Elders will be your benefactors, assisting you at work. However, you must rein in your tempers and refrain in gossips and disagreements. … A below average health forecast: accidents and injuries will be frequent. You will also suffer from insomnia and mental stress, causing you to lose focus.”

He did offer one positive note, “Your lucky number is 5535.”

Canada Post products are available online at www.canadapost.ca/shop. Stamps and FDCs will be available by mail order from Philatelic Customer Service, Box 90022, Canada Post Place, 2701 Riverside Drive, Ottawa, Ontario K1V 1J8 Canada; or by telephone from the United States and Canada at 800-565-4362, and from other countries at 902-863-6550.