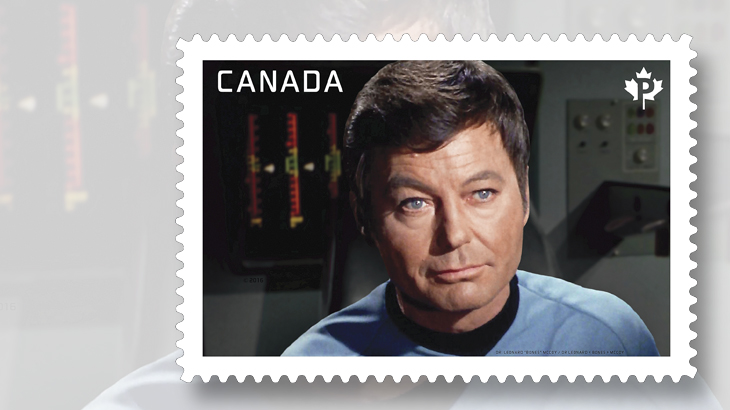 DeForest Kelly, in character as Dr. Leonard McCoy from the original Star Trek television series, on a stamp from Canada's upcoming set.

DeForest Kelly (1920-99), who was featured on the show as Dr. Leonard “Bones” McCoy, is pictured in that role on the horizontal commemorative, the fourth to show an actor from the original series. The stamps pictured previously honor actors William Shatner as Capt. James T. Kirk, Leonard Nimoy as Commander Spock, and James Doohan as Chief Engineer Montgomery Scott. One other stamp, in coil format, shows the starship Enterprise.

Shatner and Doohan were both born in Canada. Of the four actors depicted so far, only Shatner is still living.

DeForest Kelly was born in Toccoa, Ga., and his Georgia upbringing became part of Dr. McCoy’s backstory as well.

Kelly served in the United States Army Air Forces First Motion Picture Unit during World War II, and continued in the acting field after the war. Following a number of film appearances, he took on guest roles on television programs including The Lone Ranger, Gunsmoke and Bonanza.

After three seasons of Star Trek, Kelly reprised the role of McCoy in six Star Trek films from 1979 to 1991.

The new Dr. McCoy stamp was previewed, appropriately enough, Tuesday morning at the Canadian Medical Hall of Fame in London, Ontario, with the participation of Kitchener-based medical monitoring firm Cloud DX, and of course, Canada Post. They were joined by 24 eighth-grade students from London’s Chippewa Public School, who are on-site taking part in a Museum School project all week.